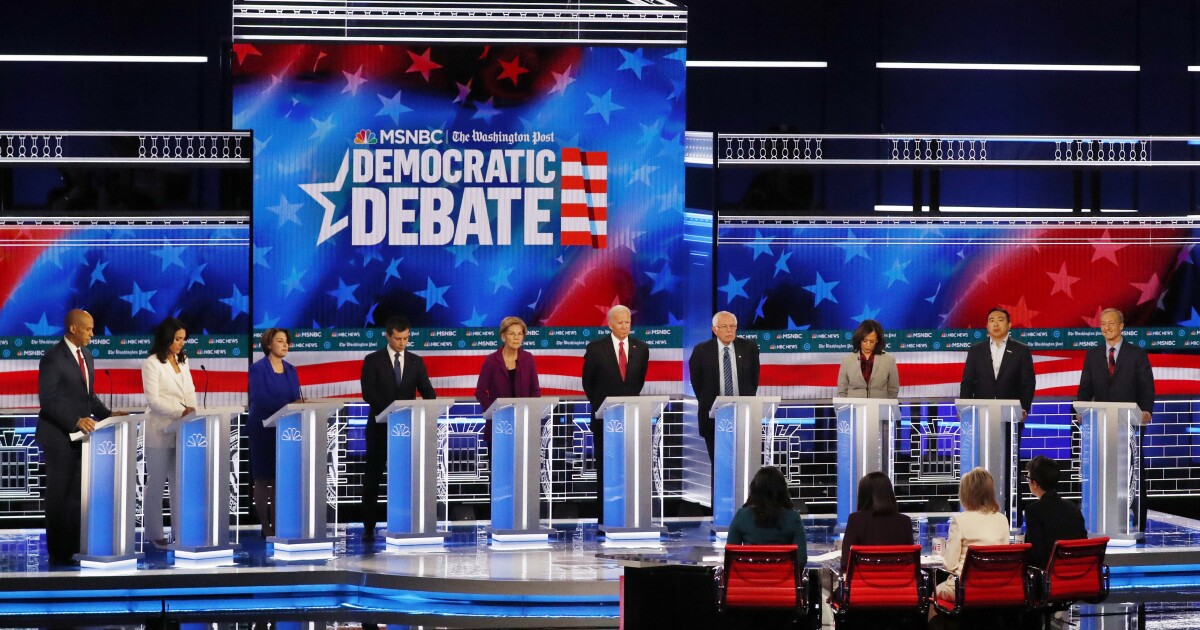 Democratic presidential hopefuls clashed on the debate stage Wednesday night over issues of race and political leadership as front-runners were challenged on their ability to rebuild the diverse coalition that elected President Obama.

As the contest for the nomination has grown increasingly unsettled, both newly ascendant candidate Pete Buttigieg, the mayor of South Bend, Ind., and former Vice President Joe Biden found themselves in the hot seat.

A debate that had been relatively sedate most of the way through grew testy in its final stretch, starting when New Jersey Sen. Cory Booker laced into Biden for a recent comment opposing marijuana legalization, which the former vice president called a “gateway drug.”

“I thought you might have been high when you said it,” Booker said, arguing that marijuana is effectively legal for those with privilege. “There are people in Congress right now that admit to smoking marijuana while there are kids in jails right now for those drug crimes.”

Biden countered that he supported decriminalization, but wanted to hold off on legalizing recreational marijuana so its long-term effects could be further studied. He then insisted he had strong appeal to black voters.

“I come out of the black community in terms of my support…. They know me. They know who I am,” Biden said, asserting that he was supported by the only black woman who had been elected to the U.S. Senate — another flub from a candidate whose missteps have lately proven costly.

Buttigieg was also a target when the moderators focused on black voters. But Harris used a question about the mayor’s difficulties with the voting bloc as an opening to argue the problem is bigger than him.

“For too long I think candidates have taken for granted constituencies that have been the backbone of the Democratic Party,” she said.

“At some point, folks get tired of [people] saying, ‘Oh, you know, thank me for showing up,’ and say, ‘Will you show up for me?’” she said. “Because when black women are three to four times more likely to die in connection with childbirth in America, when the sons of black women will die because of gun violence more than any other cause of death, when black women make 61 cents on the dollar, as compared to all women who tragically make 80 cents on the dollar, the question has to be, ‘Where have you been?’ And ‘What are you going to do?’”

Buttigieg responded that he completely agreed with her and that he welcomed “the challenge of connecting with black voters in America who don’t know me.”

He said that although he did not know what it was like to be discriminated against because of the color of his skin, he was deeply shaped by his experience governing a city with racial challenges, his faith and his experience as a gay man in the United States.

“I do have the experience of sometimes feeling like a stranger in my own country, turning on the news and seeing my own rights come up for debate,” he said, “and seeing my rights expanded by a coalition of people like me and people not at all like me working side by side, shoulder to shoulder, making it possible for me to be standing here wearing this wedding ring.”

The debate came on the heels of a marathon day of partisan warfare back in Washington, where impeachment hearings stretched from late morning until shortly before the Democratic candidates took the stage in Georgia at 9 p.m.

But even with the nation’s attention drawn to impeachment — and the proceedings centered on an alleged scheme by the Trump White House to undermine Joe Biden — it consumed limited time on the stage Wednesday, as there is little tension among the candidates on the matter. They are generally in lockstep with fellow Democrats running the hearings on Capitol Hill.

Discussion pivoted quickly off impeachment into sparring over the ideological soul of the party, and whether the path back to the White House is promises of transformational new government programs or a return to the stability and more restrained progressivism of the Obama era.

The dynamics of the race have shifted markedly since candidates last met to debate, in Ohio in October. Beto O’Rourke, the former Texas congressman who drew huge crowds and record numbers of donors in an earlier, unsuccessful Senate bid, dropped out of the presidential race after failing to replicate such enthusiasm. His fellow Texan in the race, former Housing Secretary Julián Castro, is polling so poorly that he got bumped from the debate stage this round.

Harris, Booker and Sen. Amy Klobuchar of Minnesota all qualified, but their candidacies are increasingly precarious in a race that is now dominated by centrists Buttigieg and Biden, and progressive stalwarts Warren and Vermont Sen. Bernie Sanders.

But the senators who have been struggling in the race showed resilience Wednesday night.

Klobuchar effectively accused fellow Midwesterner Buttigieg of talking a good game but having a hollow record on issues where she has taken action, including leadership on bills in Congress. It was a point she made when discussion turned to expanding access to the ballot box.

“I think that kind of experience matters,” she said, noting she has led bills to require political advertising disclosure, backup paper ballots and other efforts. “That is my bipartisan bill and I am so close to getting it done.” And Klobuchar noted that Buttigieg has yet to win a statewide race.

“Just like I have won statewide — and, Mayor, I have all the appreciation for your good work as a local official — and you did not when you tried, I also have actually done this work,” Klobuchar said. “I think experience should matter.”

Hawaii Rep. Tulsi Gabbard also joined the pile-on about Buttigieg’s experience, after the Indianan has surged to the lead in a poll in Iowa and another in New Hampshire. She questioned his judgment, saying he supported sending American troops into Mexico to fight the drug cartels.

But Buttigieg, who held his own for much of the night, responded incredulously, calling her characterization “outlandish” even by current political standards. He said he backed standard security cooperation with Mexican forces.

“Do you seriously think anybody on this stage is proposing invading Mexico?” he asked. He then countered by questioning Gabbard’s judgment in meeting with Syrian President Bashar Assad, who has been accused of war crimes in that country’s long civil war.

Gabbard said Buttigieg lacked the “courage” to meet with adversaries, noting that past American presidents had met with leaders of the Soviet Union. Buttigieg shot back, noting her position was more aligned with President Trump meeting with North Korea’s dictator.

Plans by Warren and Sanders to provide free healthcare for everyone in the country and end private insurance continue to be a flashpoint in the race, and came up again Wednesday. Sanders said “Medicare for all” was politically viable because American voters “understand today the current healthcare system is not only cruel, it is dysfunctional.”

Yet Biden and Buttigieg argued that the plans to eliminate private insurance and move all Americans into a government system are controversial with voters, and could cost Democrats the White House. They renewed their pitch for a “Medicare for all who want it” program.

And Booker took aim at the steep new taxes on the ultra-rich that are central to the pitch of the progressives in the race.

“We as Democrats need to fight for a just taxation system, but … we Democrats also have to talk about how to grow wealth,” Booker said, after Warren made her argument for raising trillions of dollars with new taxes on earnings over $50 million. “We have to give more people opportunities to create wealth to grow businesses, to have their American dream.”

Warren responded to Booker’s critique by listing the many programs her tax increase could fund, including universal childcare for ages zero to five, universal preschool, free college, forgiving 95% of student debt and other programs.