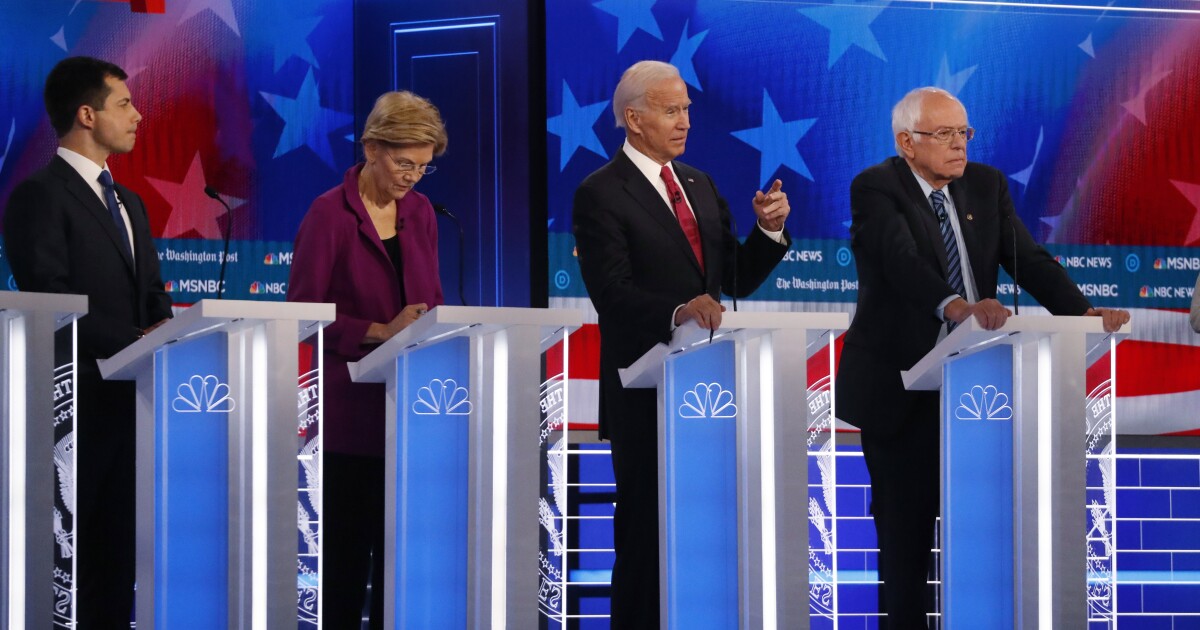 Even as the Democratic presidential field seems to be narrowing to four top contenders, Wednesday night’s debate highlighted a question the party had hoped not to face: How much do Democrats risk if they offer voters an all-white set of top candidates?

That emerging “Final Four” does offer an important measure of diversity: A woman, an openly gay man; two of the oldest men ever to run for president, as well as the youngest.

As the debate underscored, the top candidates also represent a wide spectrum of other choices facing the party: Between those who would make big structural changes and advocates of a more incremental approach; between an advocate of a strong U.S. role in the world and those with more limited ambitions; between a millennial who brings a new style of leadership and a septuagenarian touting his long government career.

But missing is any candidate of color, at a time when African American and Latino voters have become some of the most important constituencies of the Democratic Party and are crucial to its hopes of defeating President Trump.

Wednesday’s debate in Atlanta included six other candidates — including two African Americans, Sens. Cory Booker of New Jersey and Kamala Harris of California — who are still struggling to find a way to break into the top tier. Booker, in particular, made a powerful case for widening the field.

“Black voters are pissed off, and they’re worried,” he said. “We don’t want to see people miss this opportunity and lose because we are nominating someone that isn’t trusted.”

Noting that Trump won the crucial state of Wisconsin in 2016 in part because black turnout dropped in Milwaukee, he added, “We need to have someone who can inspire … African American voters to the polls in record numbers.”

The emergence of an all-white top tier points to a surprising dynamic in how the Democratic primary contest has unfolded.

Biden, who benefits from his established reputation and the goodwill engendered by his years as President Obama’s vice president, has consistently topped national and many early-state polls largely because of his commanding lead among black voters.

Several of his rivals based their strategies on the assumption that Biden’s polling lead would dwindle. Booker and Harris believed they would have a chance to pick up his black supporters.

But while Biden has seen his support fade, the decline has come mostly among white voters, especially college-educated liberals who have moved to Warren and Buttigieg. His backing among black voters remains strong, giving him a political firewall in the South, starting with South Carolina, the fourth state to vote in the primaries, where blacks make up more than 60% of the Democratic electorate.

The latest poll in South Carolina, by Quinnipiac University, found Biden leading overall with 33% among likely Democratic primary voters. Among black voters, he drew support from 44%; trailing far behind him was Sanders with 10%, Warren with 8%, Harris with 6% and Booker with 2%. Buttigieg had no black support in the state.

In an apparent shot at Buttigieg during the debate, Booker said, “No one on stage should need a focus group to listen to black voters.”

Harris declined an invitation from one of the debate moderators to critique Buttigieg’s record on race, but spoke broadly of the party’s failure to tend to the needs of black voters.

“For too long candidates have taken for granted the constituency that has been the backbone of the Democratic Party,” she said. “They show up when it’s close to election time.”

Each of the four leading candidates sought to address that problem.

Buttigieg argued that, as a gay man, he understands the experience of suffering from discrimination. “I welcome the challenge of connecting with black voters in America who don’t yet know me,” he said.

Warren, who has been making a particular effort to connect with black women, said that her policies on housing and eliminating student debt would reduce discrimination against blacks.

Sanders’ closing statement emphasized his experience during the civil rights movement of the 1960s and his roots as the son of an immigrant. He touted his commitment to helping the nation’s undocumented migrants.

“I will lead an administration that will look like America,” he said.

Biden, responding to Harris’ call to rebuild the Obama coalition, reasserted his claim to be Obama’s heir.

“I’m part of that Obama coalition,” Biden said. “I have more people supporting me in the black community because they know me.”

But for all the risk the party may face, the efforts by Booker and Harris to break out of the bottom tier may be too late.

They and the other trailing Democratic candidates in the field have been severely disadvantaged by the House impeachment hearings, which are dominating media airtime from coast to coast — especially on Wednesday, when a key witness gave the most damning testimony yet that Trump pressured Ukraine to initiate investigations of his political rivals.

“Impeachment is taking up oxygen, and it’s freezing in place the status of the top four,” said Brian Fallon, who was a top advisor to Hillary Clinton’s presidential campaign in 2016. ”It’s very hard for these people who are at 3-4%.”