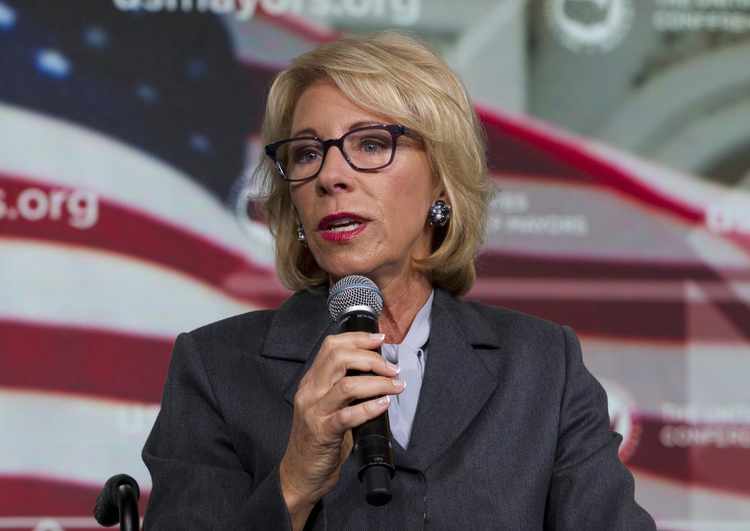 Education Secretary Betsy DeVos’ proposed Title IX regulations, which are due to be issued in final form early next year, seek to require colleges that adjudicate claims of sexual assault against their students using some of the same procedures to ensure fairness that have long been treated as fundamental by courts. The most important provisions would require colleges to hold hearings at which a representative of each party has a right to cross-examine witnesses, including the other party, and to provide both students with all evidence gathered in the investigation.

But these proposals have generated furious opposition from pro-complainant activists and politicians willing to perpetuate the biases against accused students – procedures initiated by the Obama administration and with which most colleges were happy to comply. Alexandra Brodsky, a co-founder of Know Your IX, the nation’s most powerful pro-accusers’ rights organization, recently promised “massive national student resistance” to the effort to make campus procedures more even-handed. Josh Richards, a lawyer who regularly represents universities in lawsuits filed by accused students, dismissed cross-examination as being “without any meaningful addition in a truth-seeking function.” This view flies in the face of America’s founding principles, the Constitution, and longtime Supreme Court precedent. The high court has called the right to cross-examination “the greatest legal engine ever invented for the discovery of truth.”  Yet Sen. Patty Murray, the ranking Democrat on the Senate HELP Committee, is leading the effort to neuter the regulations’ cross-examination provisions, according to the Washington Post.

Largely ignored by most news media have been the scores of judicial decisions in the past few years more in tune with the DeVos push for fairness than with the pro-accuser approach now used by most campuses and favored by most activists and politicians.

A decision last week by U.S. District Judge Mary McElroy, an Obama nominee who was re-nominated and confirmed earlier this year as part of a deal between Senate Democrats and the Trump White House, is the latest example.

She cleared the way for a former student at Johnson & Wales University in Providence, R.I., to receive a trial and seek to convince a jury of his claim that the university unfairly denied him the opportunity to question witnesses. And that it withheld from him a physical copy of the 18-page statement filed by his accuser, a former girlfriend. (John Doe, as he is being called in the lawsuit, had to go into the Title IX office to have it read to him.) And impaired his right to appeal the fairness of a hearing that university officials chose not to record or transcribe. And then expelled him for sexual assault.

Judge McElroy’s decision will focus the trial exclusively on whether Johnson & Wales handled the case so unfairly as to violate its contractual promise to be fair to accused students. The spirit of her ruling was similar to that underlying DeVos’ proposed Title IX rules.

(The judge granted the university summary judgment on the accused student’s claim of anti-male gender discrimination, which was precluded by a federal appeals court precedent. Moreover, constitutional due process requirements do not bind private colleges.)

Rejecting the university’s argument for near-total judicial deference on whether its process was fair, McElroy wrote: “[I]n the context of an uncounseled college junior, facing the frightening and very serious prospect of possible expulsion from school, in a case of contrary ‘he said/she said’ allegations, a reasonable juror could determine that the meaning of ‘fair’ includes being provided more protections than [the accused student] alleges he received.” She stressed that college-age students “are strangers to such a process and rely entirely on what is told to them to inform their understanding of what they are up against.”

Unusually, the accusation initially came not from the accused student’s former girlfriend but from her new boyfriend, identified in the litigation by his initials, B.K. He claimed that the accused had sexually assaulted the woman months previously. But in a Kafkaesque twist, university officials barred the accused from questioning this key witness on the grounds that he was serving as his girlfriend’s adviser during the hearing.

B.K.’s role as the original complaining witness also raised the possibility that the accuser had a motive to lie to him, and ultimately to the university, about whether her relations with the accused former boyfriend (against whom she had initially declined to file charges) had been consensual.

The accuser admitted having at least four consensual sex sessions with John Doe in his dorm room. But, she claimed, he subsequently forced himself on her in his bathroom, after which they returned to bed. A week later, she admitted returning to his dorm room for sex, which she claimed developed into non-consensual activity when it became too “rough.” The accused denied the bathroom encounter ever occurred, and said all other sexual encounters were consensual. His two roommates heard nothing suggesting a struggle regarding the disputed bathroom encounter. But they were not called to testify at the hearing.

Judge McElroy also ruled that the jury should consider whether it was fair for Johnson & Wales – like almost all other universities — to combine minimal procedural protections with its “preponderance of the evidence” standard of proof. That standard requires finding an accused student guilty even if the adjudicators are only slightly more confident of the accuser’s truthfulness than not.

Johnson & Wales is far from the only private university to face a lawsuit that raised significant doubts about its guilty finding as well as highlighting procedures designed more to accommodate accusers than to discern the truth.

This spring, U.S. District Judge Alfred Covello ruled that former Yale basketball captain Jack Montague was entitled to move forward with a claim that Yale’s proceedings against him “deprived him of basic fairness.” Montague’s lawsuit credibly alleged that Yale’s Title IX officials — in the hope that a guilty finding against such a prominent male student would appease protesters claiming that the university wasn’t tough enough on sexual assault — had circumvented their own procedural rules by bringing charges against him that his supposed victim declined to initiate.

Yale settled the lawsuit rather than face a trial, just as Boston College was about to lose a jury verdict in a similar lawsuit in September. But courts are “an imperfect vehicle” for students seeking relief from unfair campus disciplinary proceedings, in the words of Samantha Harris, vice president for procedural advocacy of the Foundation for Individual Rights in Education (FIRE).

This is especially true in the context of private schools that are bound not by constitutional due process rules, but only by often-archaic contract laws that vary from state to state. For example, in another Boston College case, a panel of the U.S. Court of Appeals for the First Circuit reversed a lower court’s preliminary injunction that had temporarily blocked the discipline of an accused student.

Judge Sandra Lynch held for the First Circuit that the lower court erred in ruling that Massachusetts law required allowing accused students a sort of quasi-cross-examination of witnesses against them. She stressed a Massachusetts Supreme Judicial Court ruling (which predated the debates generated by the post-2011 Title IX policy change) that courts must be deferential to “disciplinary decisions made by private colleges and universities.”

Lynch passed over the fact that BC had recently changed its procedures to make them dramatically less fair by doing away with the live hearing to which accused students had previously been entitled. Even assuming that the First Circuit was right about Massachusetts law, however, the outcome illustrates the need for the new federal rules that DeVos has proposed to ensure fairness.

Fourteen private colleges and universities in Massachusetts, including such prestigious institutions as Amherst and Tufts, filed an amicus brief on BC’s behalf, successfully urging the First Circuit to bow to “the discretion that academic institutions have always had in shaping student learning experiences” by dispensing with any right to a hearing at all.

For this troubling proposition, the colleges cited their “extensive” work in sex cases since 2011, when the Obama administration first issued its guilt-presuming Title IX guidance. The signatory colleges made no mention of anything they had done in response to DeVos’ 2017 decision to rescind the Obama guidance and show more concern for the rights of the accused.

This amicus brief and much other evidence show that absent the robust pressure that DeVos and many (though not all) judges seek to apply, most colleges and universities will never create fairer systems to handle campus sex allegations. The countervailing pressures on campus officials – with most news media, academics, politicians, and activists demanding something very close to a presumption of male guilt — are simply too high.

KC Johnson is co-author, with Stuart Taylor Jr., of “The Campus Rape Frenzy: The Attack on Due Process at America’s Universities” (Encounter, 2017).

Stuart Taylor Jr. is co-author, with KC Johnson, of “The Campus Rape Frenzy: The Attack on Due Process at America’s Universities” (Encounter, 2017).