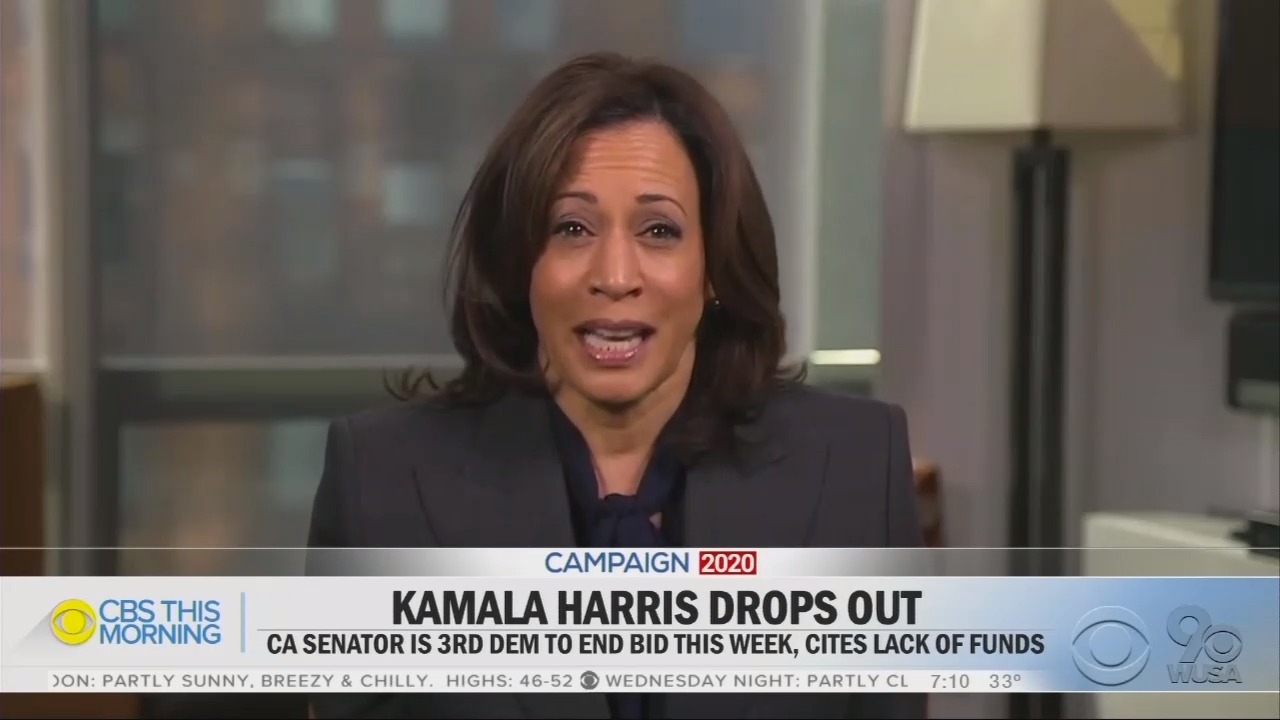 If you ask CBS, there sure are a lot of moderate Democrats running for president. During the early stages of the 2020 race, CBS This Morning political correspondent Ed O’Keefe has labeled numerous liberal candidates as “moderates.” He’s not even totally sure if Kamala Harris, the Democratic Senator from California who just dropped out, is a liberal.

On Wednesday, the journalist told This Morning hosts: “The other issues are that, you know, for much of the year you couldn’t tell —  voters would tell us they couldn’t tell where to place her. Was she a liberal like Elizabeth Warren and Bernie Sanders?” He speculated, “Or was she more of a middle of the road, moderate like a Joe Biden and Pete Buttigieg who had emerged casting a very clear message of ‘I’m a more moderate figure.’”

“You couldn’t tell” if Harris was a moderate or a liberal? The Democrat’s American Conservative Union score in 2017 was 0. It was 9 in 2018 and she has a lifetime average of 4.5. Harris is solidly on the left when it comes to abortion, gun control and other contentious issues. She also came out as being “open” to packing the Supreme Court through an expansion scheme. Moderate? Hardly.

On November 25, O’Keefe touted the entry of liberal New York Mayor Michael Bloomberg. Surprise! He found another moderate: “After initially ruling out a run earlier this year, Bloomberg is officially in, running as a moderate Democrat.”  (The New York liberal is solidly pro-abortion and anti-Second Amendment.)

On November 8, O’Keefe found more moderates, saying: “But recent polling shows Biden is slipping behind Elizabeth Warren and Bernie Sanders and moderate Indiana Mayor Pete Buttigieg.” Later in the same show, correspondent Margaret Brennan cheered the possible entry of Bloomberg: “[Bloomberg] in some ways, though, splitting possibly a vote with Joe Biden, maybe helping the center, that center moderate Democrat have another voice.”

On September 24, O’Keefe touted Buttigieg’s Medicare plan. Guess what he called it? Moderate. The journalist promoted: “[Buttigieg is] hoping to gain support for sure and definitely wants to talk up this idea because he sees it as a more moderate alternative to Medicare for all.”

So, to recap: Biden, Buttigieg, Bloomberg and maybe (?) Kamala Harris are moderates. One might wonder why journalists like O’Keefe are afraid of the “liberal” label.

A transcript of the segment is below. Click “expand” to read more.

GAYLE KING: Have you heard? There’s another big shakeup in the Democratic 2020 race for president. California Senator Kamala Harris is the third candidate this week to drop out. Harris entered the race as a main player, polling as high as 16 percent at one time. But she spent the last several months in the single digits. Harris said yesterday, “It’s been an honor to run,” but she had no choice but to bow out.

KAMALA HARRIS: In good faith, I cannot tell you, my supporters and volunteers, that I have a path forward if I don’t believe I do.

KING: Well, that leaves 15 candidates still in a very crowded race. CBS News political correspondent Ed O’Keefe is back to discuss. Joining us at the table once again.

KING: Compared to how we started.

KING: Is it as simple, Ed, that she ran out of money? Or were there other there were issues?

O’KEEFE: There were other issues.

O’KEEFE: The most immediate is that you need money. The other issues are that, you know, for much of the year you couldn’t tell —  voters would tell us they couldn’t tell where to place her. Was she a liberal like Elizabeth Warren and Bernie Sanders? Or was she more of a middle of the road moderate like a Joe Biden and Pete Buttigieg who had emerged casting a very clear message of “I’m a more moderate figure.”

O’KEEFE: Yes. When you go to Iowa and New Hampshire, they expect details. They want your theory of the case, why you’re in this. Shoe struggled mightily.

ANTHONY MASON: What does this do to the rest of the field, do you think? Where do her voters go now?

O’KEEFE: Our CBS News polling shows among Harris supporters, their second-choice pick would be Elizabeth Warren or Joe Biden predominantly. So they could see a bit of an increase in support here, at least initially.

KING: Not Cory Booker supporters? There were some thinking that Kamala Harris and Cory booker were splitting the black vote.

O’KEEFE: Yeah. But really, the black vote is held by Joe Biden. The support he enjoys among African-Americans, not only in South Carolina, which is the biggest block of them early on, but nationwide is still the former vice president. And part of the reason Harris struggled, part of the reason Booker continues to struggle, they can’t chip away at the support.

DOKOUPIL: Are there political lessons as she leaves the stage? Are there changes that other campaigns should make to avoid the same exit?

O’KEEFE: I think there’s a few lessons for future candidates. If you talk to people in her campaign, others who observed it — one, you must have a theory of your case and stick to it. Most voters know what Bernie Sanders, Elizabeth Warren, and Joe Biden are about, for example. The other, keep your relatives out of it. The big issue here has been for her that she has a sister, Maya Harris, who worked for Hillary Clinton, a very prominent Democratic activist, who was involved in —   in the campaign. But she had professional staff, as well, who were telling her to do other things. And day to day, aides will tell you, they struggle to figure out what exactly she should do because she couldn’t figure out who she should listen to.

DOKOUPIL: Let’s talk about the money for a second.

KING: She took a swipe, it seemed, at Mike Bloomberg.

MASON: She said, “I’m not a billionaire.” You noted earlier in this broadcast that Mike Bloomberg, in what, a week on the campaign trail, spent 52 —

MASON: Which is twice what Kamala Harris raised?

O’KEEFE: In —  through September, yes. She had raised about 35. He’s already —  give or take, he’s going to end up spending, you know, gobs of money.

DOKOUPIL: So, what does that say about our political system?

O’KEEFE: You know, we’ll see whether voters accept that Bloomberg is doing this and somehow winning them over and whether they have an issue with it. Remember, we have a wealthy president who used his wealth and affluence to win over voters.

O’KEEFE: So, it could work again for Bloomberg. It seems to be effective for Tom Steyer to some extent in these early states where he’s running a lot of ads.

KING: Kamala Harris says she’s still very much in this fight as she said in her exit video. We’ll see what that means.

MASON: All right, Ed. Thank you.