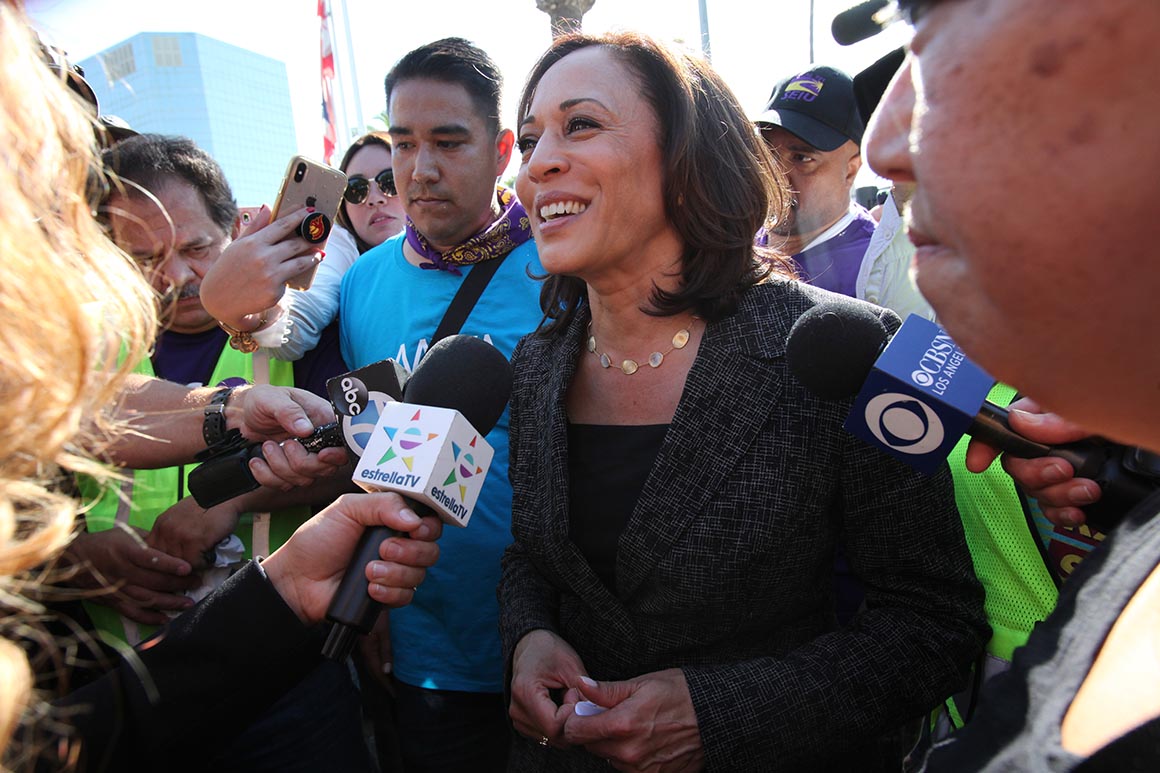 Harris saw early promise in the crucial state: After a spectacular campaign kickoff in January where Harris was cheered by 20,000 backers in her hometown of Oakland, Harris surged into the early top tier of the Democratic field and quickly amassed a slew of endorsements from leading California politicians. (They included Gov. Gavin Newsom, who on Monday announced that he would campaign for Harris in Iowa — just in time to see Harris announce the suspension of her campaign Tuesday.)

But some notable California elected officials failed to sign on to her effort from the very beginning. Harris’ senior Senate colleague, Dianne Feinstein — and her husband Richard Blum — early on hosted fundraisers for former Vice President Joe Biden in San Francisco, where Harris served as district attorney. Sen. Bernie Sanders early on nabbed the backing of Silicon Valley Rep. Ro Khanna, his California co-chair, who has been vociferous in his support. Just days ago, Rep. Katie Porter — another California Democratic party rising star — backed Massachusetts Sen. Elizabeth Warren. Los Angeles Mayor Eric Garcetti didn’t join the parade of state elected officials getting behind Harris in the early days — and still hasn’t endorsed in the race.

After 11 months Harris’ troubled campaign’s prospects in California’s March 3 primary were bleak. Now, Harris could potentially step into the role of kingmaker.

So far, other Democratic contenders have responded to Harris’ exit with an outpouring of support, suggesting that her support, and those of the elected officials who did support her, could be important. The courtship could buoy her long-term prospects.

“I think you’ll see a bunch of candidates clamoring for her support and endorsements, and as someone emerges they’ll all consider her highly both as a surrogate and as a potential vice presidential nominee or as an attorney general,” argued Dan Newman, a political consultant who has worked for Harris in the past.

In a press call with reporters on Tuesday, Sen. Bernie Sanders’ team argued that the road to the nomination runs through California, and that the Vermont senator will be looking to galvanize lower-turnout Latino and working-class voters — and to capture Harris backers.

“It’s no secret Senator Harris had substantial support among elected officials in California,” Sanders senior adviser Jeff Weaver told reporters. “And now with her leaving the race our campaign will certainly be reaching out to folks.”

hSome of Harris’ grassroots supporters say it will be hard to replace her unique position in the Democratic field — as a woman of color, a child of immigrants and an elected official who appeared to many, at least early on, to have the muscle to break the glass ceiling and become the first female president.

“I’m heartbroken,’’ said Gloria Nieto, a longtime LGBTQ Democratic activist from Santa Cruz, as she prepared Tuesday to take the “Kamala Harris for the People” sign from out of her front window. She lamented that Harris’ departure would currently leave the next televised primary debate on Dec. 19 in Los Angeles with nary a single candidate of color. Nieto blamed a political system “which allowed rich white men to buy their way in, while the people who deserve to be on the stage are not going to be there … Julian, Cory, Kamala. Give me a break.’’

But while Harris sought to unify California’s political leaders behind her, her home-state roots could not erase the reality that her most formidable rivals had longer public records and the name recognition that comes with it. Internal turmoil driven by staff conflict and a muddled message made it that much harder to hang in the top tier with better-established rivals.

“She never held any sort of commanding lead in California,’’ noted political analyst and Loyola Law School professor Jessica Levinson, who says Harris failed to deliver a message that resonated strongly even in her home state. That was particularly telling, Levinson says, because “if there’s any place where the voters know her the best, it’s California.”

An early red flag came in a March poll showing that Californians liked Harris as a senator but were lukewarm on her presidential pursuit, Public Policy Institute of California President Mark Baldassare said.

East Bay Assemblywoman Buffy Wicks, a longtime Harris backer — and one of the architects of Barack Obama’s 2008 grassroots campaign — said that “I think this proves it is still very difficult for a woman to be president. … She ran to win — and when that path became not possible, she wanted to be honest with supporters … and not divert attention from her colleagues in the primary field.”

“Ultimately, she was trying to run her own race, her own identity and vision on what she believes this country can be,” Wicks said. “And unfortunately, the resources weren’t there at the end of the day.”

“I think this proves it is still very difficult for a woman to be president.”

San Francisco Mayor London Breed, in an email statement to POLITICO, also stressed that Harris’ campaign “has been an inspiration to women like me and people all across this country.” Breed added: “She has been a mentor and a friend, and I know she will continue to be a strong, progressive leader for our country and our state.”

But veteran Democratic strategist Garry South, who has advised three presidential campaigns and a Newsom gubernatorial campaign, says Harris’ chief mistake was failing to consider the tumultuous political history in her home state.

“Anybody in California is free to run for president — but the notion that you can assume because you have been elected before here gives you some natural advantage is naive, in the extreme,’’ he said. “Even our donors here are very discriminating, and like to have five different candidates come to their homes. … There is no home state advantage here. And she made the assumption that she had it.”

“I think the politician who comes out of this looking the smartest is Dianne Feinstein,’’ says South. “She shunned her own fellow Senator from California to endorse Joe Biden, and they called her an outlier. And guess who’s out of the race — and who’s the frontunner?”

Even as she deserts the race, Harris’ supporters also cite a silver lining, noting that as a young senator in a safe seat, the former state Attorney General likely has many years in the public eye ahead of her — some suggest as a possible vice presidential candidate or a cabinet member in a future Democratic administration.

“I’m disappointed … but I’m grateful that California — and the nation — will continue to have Senator Harris and her intelligent, fierce and compassionate leadership,’’ says San Jose Mayor Sam Liccardo, an early endorser. “I’m just very proud of everything she’s accomplished,’’ he said adding he’s now looking forward to watching her act as a juror in the U.S. Senate for what promises to be the upcoming impeachment trial of President Trump. “I suspect the best is yet to come.”