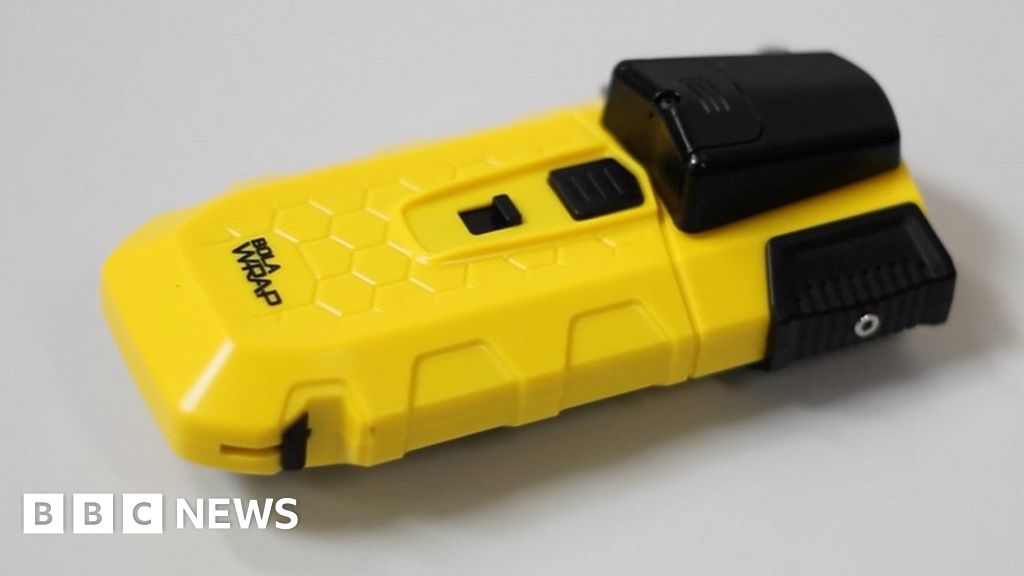 Two hundred Los Angeles police officers will be trained to use a new gadget designed to snare a person by wrapping them in a cord, officials say.

The BolaWrap, recently adopted by several other forces, fires a cord that can entangle an individual’s torso or legs from up to 25ft (8m) away.

The tether is intended to restrict the person’s movement, allowing officers to take action without using force.

But civil rights activists have raised concerns over its potential usage.

Three devices will be carried by officers in the southern Californian city as part of a 90-day trial starting in January.

A total of 200 Los Angeles Police Department (LAPD) officers will be given the devices after training, the force said.

“If you deploy a wrap tool, it buys time for officers to deploy a secondary option,” Bell Police Chief Carlos Islas said, according to the LA Times. “It will inevitably restrain someone. It’s a tool that’s been a long time coming.”

Officers across the country face scrutiny for their use of force on unarmed individuals.

Mr Islas says the device will only be used in specific circumstances, including cases when individuals are suffering from mental health issues. It is one of many tools used by officers and may not work in every situation, Mr Islas says.

What is the device?

Wrap Technologies, the company that makes the gun-like gadget, describes it as “a hand-held remote restraint device that discharges an 8ft bola style Kevlar tether”.

At the end of the tether – fired at 513ft per second – are two small barbs that attach to a person when they make contact.

“Suspects are restrained with minimal to no pain, while also enabling officers to swarm and investigate the situation,” the company says on its website.

Who already uses the device?

Several police forces, including Fresno in California and Hendersonville in North Carolina, have been training their officers to use the BolaWrap on the streets.

In October, a Fresno police officer used a BolaWrap gun to apprehend a man who had stabbed two people with a kitchen knife.

Last month, Santa Cruz Sheriff’s Office said it had bought 20 BolaWrap devices it hoped would prove to be “another less-lethal force option to their tool-belt”.

In US media, the gun-like device has been likened to a gadget used by comic book superhero Batman, who prefers non-lethal means when fighting crime.

But it has also been criticised by civil liberties activists. Discussing the tool at a meeting with LA police, Adam Smith, member of Black Lives Matter, an activist movement, said it would probably be used mostly in minority communities, the LA Times reports.

What other new technologies are police using?

The device is one of several recent examples of police forces in the US testing new technologies for law enforcement purposes.

A spokesman for the force said the robot, made by Boston Dynamics, was “a valuable tool for law enforcement because of its ability to provide situational awareness of potentially dangerous environments”.

The American Civil Liberties Union, a rights group, asked the force to explain how the robots were being used, raising concerns over transparency and potential racial injustice.