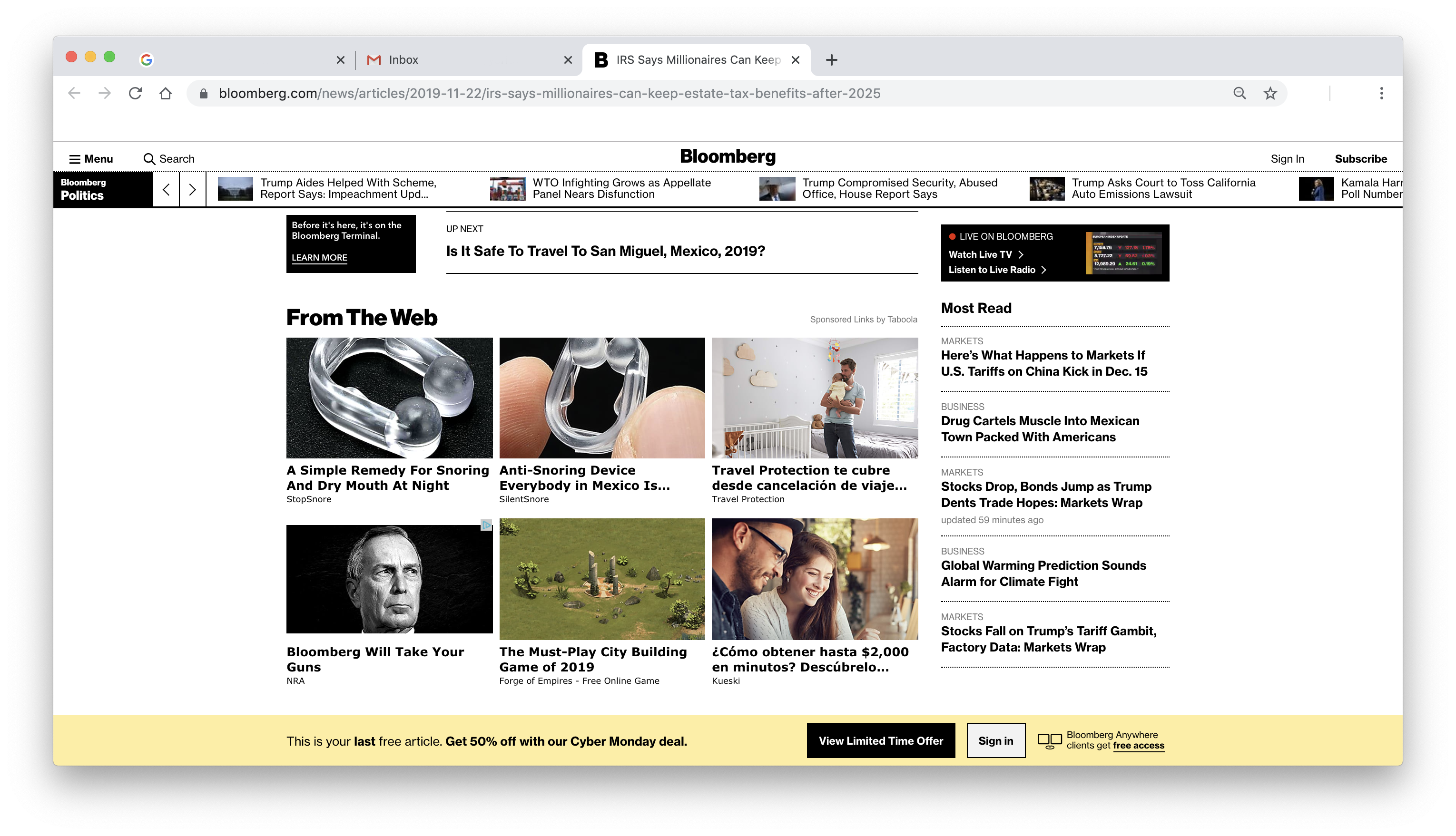 Bloomberg News reporters have been told not to cover their owner’s presidential bid, but the media outlet’s website let one of his biggest political rivals run content about the candidate. Below a recent article on Bloomberg.com, an ad ran claiming “Bloomberg will take your guns.” It was written by the National Rifle Association (NRA), the US’s pro-gun lobby group and frequent critic of Michael Bloomberg’s gun-control policies.

The appearance of the ad typifies the pitfalls of digital businesses’ reliance on programmatic and algorithmic decision making. It is hard to imagine a Bloomberg employee proactively selling an ad disparaging their boss, let alone one sponsored by an organization that the company owner has spent years actively fighting. Yet, human-created flaws coded into the ad-serving system allowed it to appear.

A Bloomberg Media spokesperson said that the company bans political and issue-based advertising on its sites, including a prohibition on ads advocating for firearms. Bloomberg pulled the ad after Quartz brought it to its attention.

The ad links to a 25-question NRA-hosted “National gun owners survey.” At the bottom is a form to submit your name and contact information. Parameters contained in URL of the survey implies that the purpose of the ad is “lead generation” and was targeted on “right-wing topics.” The NRA did not respond to Quartz’s questions about whether the organization was specifically targeting the ad to readers of Bloomberg.com.

When Quartz saw it, the ad appeared at the bottom of an article about a new US government rule around the tax treatment of gifts and inheritances.

The section of the page, called “From The Web,” is populated by Taboola, a company that specializes in programmatic modules like this where advertisers pay to display links to sponsored content. The symbol in the corner of the anti-Bloomberg ad suggests Taboola sold the placement to Google which in turn sold it to the NRA though its ad network or possibly via other middlemen.

“This content violates Taboola’s policies” according to Daniela Sztulwark, a spokesperson for Taboola. “It should not have run on our network.” She said the company bans political advertisements and has removed this one from its systems.

Sztulwark said that the ad only ran for a few hours. Both she and the spokesperson from Bloomberg separately told Quartz that very few people saw the ad.

In October 2019, Taboola and its main competitor Outbrain announced plans to merge. They said at the time that they display ads to 2 billion people per month.