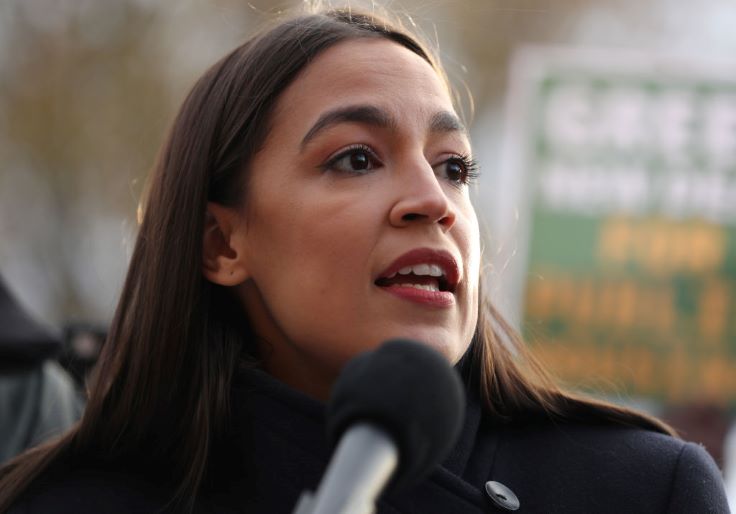 Rep. Alexandria Ocasio-Cortez (D., N.Y.) falsely claimed that her work in Congress fast-tracked the arrival of life-saving HIV drugs to the market, taking credit for a corporate decision made four years before she was elected to Congress.

Responding to President Trump’s criticism of House Democrats, the progressive congresswoman fabricated a personal achievement by claiming that she “took on Big Pharma” with “colleagues in hearings that brought PrEP generic a year early” in a tweet last week.

In fact, Gilead, the pharmaceutical company behind PrEP—a medication that can reduce the transmission risk of HIV by 99 percent—had reached an agreement back in 2014 to allow a generic version of the drug to come to market a year early. The company disclosed that agreement weeks before its CEO, Daniel O’Day, appeared before Congress in May.

Gilead’s patent for an active ingredient in Truvada—the company’s HIV prevention drug—will expire in 2021, but currently prohibits most competitors from making generic versions of the medicine. However, a 2014 legal settlement between Gilead and Teva Pharmaceutical authorized the latter to sell generic Truvada starting in 2020, a year before the patent is set to expire.

In May, Gilead representative Douglas Brooks said the agreement was “not related to current discussions with the U.S. government” to broaden access to the medicine, denying the possibility that politicians such as Ocasio-Cortez had any bearing on the decision to allow early manufacturing of the generic drug.

Ocasio-Cortez’s Democratic colleagues were aware of the 2014 legal settlement, which was reported by media outlets and included in O’Day’s written testimony to Congress. Rep. John Sarbanes (D., Md.) explicitly referred to the settlement during the mid-May hearing, which Ocasio-Cortez attended, saying that “Gilead allowed Teva to come to the market in 2020” due to the settlement.

Although Ocasio-Cortez asserted in her tweet that Trump has spent three years jailing kids and making corruption “the cause celebré,” the White House has taken steps toward broadening access to HIV medication. The administration announced on Tuesday that it will provide HIV prevention drugs free-of-charge to all uninsured people as part of its plan to reduce new HIV transmission by 90 percent over the next 10 years.

The Department of Health and Human Services launched a lawsuit against Gilead in early November, arguing that Gilead has infringed on Centers for Disease Control and Prevention patents by selling PrEP medication. If the government wins the lawsuit, it could ensure more Americans have access to affordable HIV prevention medicine.

PrEP4All, an HIV prevention organization, lauded the Trump administration’s lawsuit, saying it is a “critical step to provide access to effective HIV prevention to everyone who needs it.” Still, the organization expressed skepticism for Gilead’s decision to approve generic Truvada a year early, arguing that it “will do little to reduce the price in a way that will increase access” because it only introduces one competitor into the market.

Ocasio-Cortez’s office did not respond to a request for comment.

Yuichiro Kakutani is a reporter at the Washington Free Beacon. He recently graduated from Cornell University, where he studied government and history. He previously served as editor for The Cornell Daily Sun. He’s a proud New Yorker — and by that he means, New York City.