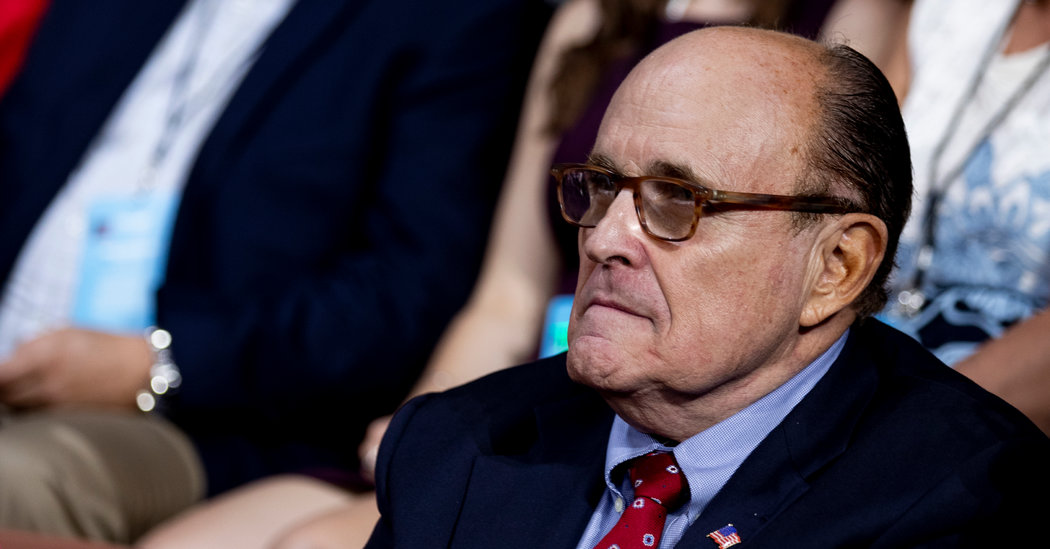 WASHINGTON — In the two days before President Trump forced out the American ambassador to Ukraine in April, his personal lawyer Rudolph W. Giuliani was on the phone with the White House more than a dozen times.

That effort accelerated through the spring and summer into a full-court press to force Ukraine’s new president to accede to Mr. Trump’s wishes or risk losing $391 million in military assistance desperately needed to hold off Russian-led forces waging a separatist war in eastern Ukraine.

From March 26 to Aug. 8, as he developed an irregular foreign policy channel that eventually sidelined both National Security Council and State Department aides, Mr. Giuliani — who is not a government employee — was in touch with top-ranking officials, the newly revealed call records suggested.

He reached out to Secretary of State Mike Pompeo; the national security adviser at the time, John R. Bolton; Representative Devin Nunes, the top Republican on the Intelligence Committee itself; midlevel White House officials; the Fox News host Sean Hannity; a conservative columnist; an associate who has been charged in a scheme related to Ms. Yovanovitch’s ouster; and the owner of a mysterious number, “-1.”

Investigators are trying to determine whether the unidentified phone number belongs to Mr. Trump, said Representative Adam B. Schiff, Democrat of California, who leads the House Intelligence Committee. If so, the phone calls with Mr. Giuliani could be further evidence of the president’s direct involvement in the Ukraine affair.

The report gave no indication of what conversations took place or how investigators obtained the telephone records, which were apparently produced in response to a subpoena to AT&T. Nonetheless, the timing and volume of the calls buttressed testimony by witnesses who portrayed Mr. Giuliani at the center of a shadow foreign policy that dismayed and baffled many in the administration.

The call records showed “considerable coordination among the parties, including the White House” to falsely portray Ms. Yovanovitch as disloyal to the president and to manipulate administration policy for his personal benefit, Mr. Schiff told reporters.

The report detailed a game of phone tag between the -1 phone number and Mr. Giuliani on Aug. 8. That same week, Mr. Giuliani was vigorously pressing State Department officials to persuade President Volodymyr Zelensky of Ukraine to publicly announce investigations into the Biden family and whether Ukraine meddled in the 2016 election.

Circumstantial evidence shows that some of the -1 calls involved Mr. Trump, Mr. Schiff said, adding that his committee was working “to find out definitively.”

House investigators suspect that the number may belong to Mr. Trump in part because of phone records used as evidence in the criminal case against Roger J. Stone Jr., a longtime friend and former campaign adviser who was convicted last month of seven felonies, including lying to Congress. Mr. Stone, who talked directly to Mr. Trump, received a call from a number listed only as -1, the records from his trial show.

Mr. Schiff declined to say how the committee obtained the phone records.

Mr. Giuliani’s efforts in Ukraine are under intense scrutiny by federal prosecutors as well as congressional investigators. Prosecutors in New York are looking into whether he violated foreign lobbying laws in trying to oust the American ambassador and also scrutinizing any financial dealings he might have pursued with Ukrainian officials. Two of his associates — including one whose records were also in the House report, Lev Parnas — have been indicted on charges of violating campaign finance laws and other infractions.

State Department phone records cited in the House report show Mr. Giuliani and Mr. Pompeo spoke on March 26 and 28. In an interview in late November, Mr. Giuliani said he spoke to Mr. Pompeo to give him the results of his Ukraine research, including the role he believes that Ukrainians played trying to disrupt Mr. Trump’s 2016 election campaign.

At the time, Mr. Pompeo was under pressure from both Mr. Giuliani and the White House to remove Ms. Yovanovitch from her post. A month later, she was recalled to Washington, even though multiple high-ranking State Department officials testified that she had done nothing wrong.

The records of Mr. Giuliani’s calls also suggest that Mr. Nunes may have played a deeper role than was previously known in Mr. Giuliani’s efforts to manipulate the administration’s policy toward Ukraine.

While the subject of their conversation is not known, they were most likely speaking about Ukraine, the report suggested. In the days beforehand, Mr. Giuliani said on Fox News that Ukraine had improperly interfered in the 2016 election and posted on Twitter citing criticism of Ms. Yovanovitch and accusing Ukrainian officials of interfering in American politics.

During the impeachment hearings, Mr. Nunes led the defense of Mr. Trump, repeatedly raising questions about Ukraine’s role in the 2016 election and urging an investigation into Hunter Biden, the younger son of former Vice President Joseph R. Biden, who was hired onto the board of a Ukrainian gas company.

At a news conference on Tuesday, Mr. Schiff raised questions about Mr. Nunes’s role. “It is, I think, deeply concerning that at a time when the president of the United States was using the power of his office to dig up dirt on a political rival, that there may be evidence that there were members of Congress complicit in that activity,” Mr. Schiff said.

Mr. Nunes ignored questions about the call records in the Capitol, and his spokesman did not respond to requests for comment. But Republican leaders backed him on Tuesday. “Devin Nunes has a right to talk to anybody,” Representative Kevin McCarthy of California, the top Republican in the House, told reporters.

Mr. Giuliani also spoke with current and former members of Mr. Nunes’s staff, including Kashyap Patel, who left Mr. Nunes’s office in February and joined the National Security Council staff to work on issues involving the United Nations and other international organizations. The two men had a 25-minute call on May 10, according to the records, despite the fact that Mr. Bolton, then the national security adviser, had said that no one in his office should be talking to Mr. Giuliani, according to congressional testimony.

Mr. Patel had no formal responsibility for Ukraine policy, and Fiona Hill, then a senior aide to Mr. Bolton, had raised questions about whether he was straying from his official portfolio. She asked Charles Kupperman, then Mr. Bolton’s top deputy, in late May whether Mr. Patel had assumed a role in Ukraine matters but received no answer, according to the impeachment report.

After The New York Times published an article in October about Ms. Hill’s testimony, Mr. Patel filed a defamation lawsuit against the news organization. In that lawsuit, Mr. Patel denied he “played a role in shadow foreign policy” aimed at pushing Ukraine to pursue investigations sought by Mr. Trump.