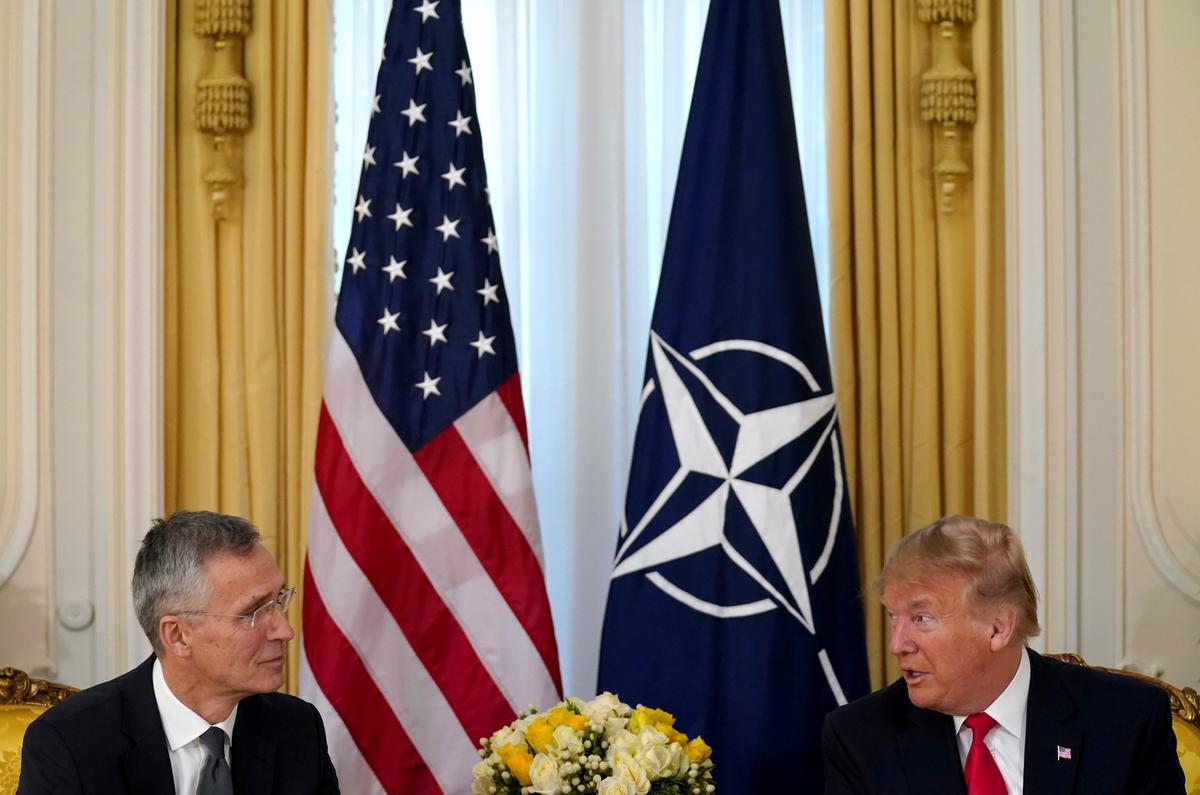 LONDON (Reuters) – U.S. President Donald Trump and French leader Emmanuel Macron clashed about the future of NATO on Tuesday before a summit intended to celebrate the 70th anniversary of the Western military alliance.

In sharp exchanges underlining discord in a transatlantic bloc hailed by backers as the most successful military pact in history, Trump demanded that Europe pay more for its collective defence and make concessions to U.S. interests on trade.

President Macron stood by comments he made last month describing NATO as suffering from a lack of strategic purpose akin to “brain death”, and criticised fellow NATO member Turkey, which he accused of working with Islamic State proxies.

Washington and Paris have long argued over NATO’s purpose — France opposed the 2003 Iraq war — but the new tensions will add to doubts over the alliance’s future that have grown with Trump’s ambivalence over U.S. commitments to defend Europe.

Trump said Macron’s criticism of NATO was “very, very nasty” and questioned whether the U.S. military should defend any countries that were “delinquent” on alliance targets for national military spending.

All 29 member states have a target of spending 2% of their gross domestic product on defence and Trump has singled out Germany for falling short of the target.

But Macron, speaking later at a news conference with Trump, stood by his criticisms of NATO and said its real problem was a failure to forge a clear purpose since the end of the Cold War.

“We have to be clear on what the fundamentals of NATO will be, which is not the case now,” he said.

Adding that NATO has not even agreed a definition of terrorism, he said: “When I look at Turkey, they are fighting against those who fought with us shoulder to shoulder against ISIS (Islamic State) and sometimes they work with ISIS proxies.”

Turkey threatened to block a plan to defend Baltic states and Poland against Russian attacks unless NATO backed Ankara in recognising the Kurdish YPG militia as terrorists.

The YPG’s fighters have long been U.S. and French allies against Islamic State in Syria. Turkey considers them an enemy because of links to Kurdish insurgents in southeastern Turkey.

Erdogan has already strained alliance ties with a move to buy Russian air defence systems. Trump said he was looking at imposing sanctions on Ankara over the issue.

The uncertainty over the plan for Poland and the Baltic states, drawn up at their request after Russia annexed Crimea from Ukraine in 2014, raises issues about security on all of NATO’s frontiers.

Under the North Atlantic Treaty Organisation’s 1949 founding treaty, an attack on one ally is an attack on all its members, and the alliance has military strategies for collective defence across its territory.

The summit, in a hotel in Hertfordshire just outside London, begins on Wednesday. On Tuesday evening, leaders were due to attend two receptions, one hosted by Queen Elizabeth and one by Prime Minister Boris Johnson.

Several hundred anti-Trump protesters gathered in Trafalgar Square in central London, holding banners and placards reading “Dump Trump” and “No to racism, no to Trump”.

Hoping to placate Trump, Europe, Turkey and Canada will pledge at the summit some $400 billion in defence spending by 2024, and agree to a reduction of the U.S. contribution to fund the alliance itself.

The allies will approve a new strategy to monitor China’s growing military activity, and identify space as a domain of warfare, alongside air, land, sea and computer networks. They will issue a statement condemning Russia’s annexation of Crimea.

Trump said he believed Russia wanted deals on arms control and nuclear issues, and that he would be willing to bring China into such accords.

Reporting by Phil Stewart and Robin Emmott in London, Ali Kucukgocmen in Istanbul, Joanna Plucinska in Warsaw and Vladimir Soldatkin in Moscow; Estelle Shirbon and Iona Serrapica in London; Writing by Mark John and John Chalmers, Editing by Timothy Heritage