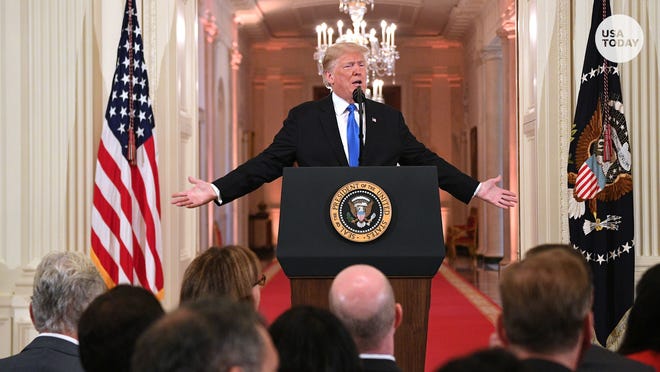 The ruling blocks another effort by the president to keep his finances private, though he’s likely to appeal this decision, too.

The U.S. Court of Appeals for the Second Circuit ruled 3-2 that public interest favors disclosing records regarding Trump’s private business, as well as those of his family members and related entities.

House committees’ “interest in pursuing their constitutional legislative function is a far more significant public interest than whatever public interest inheres in avoiding the risk of a Chief Executive’s distraction arising from disclosure of documents reflecting his private financial transactions,” the court said in a 108-page ruling.

‘Slow-motion constitutional car crash’:Trump, Congress battle over investigations with no end in sight

The appeal concerns three subpoenas issued by two House committees to Deutsche Bank. The House Intelligence Committee and the Financial Services Committee seek a number of Trump’s financial records, as well as those of his three oldest children and the Trump Organization.

Deutsche Bank has revealed that Trump’s tax returns are among the documents that fall under the subpoenas. Unlike his predecessors, Trump has refused to disclose his tax returns.

The Financial Services Committee issued a separate, narrower subpoena seeking Trump Organization records from Capital One Financial Corp. In April, Trump sued to block Deutsche Bank and Capital One from handing over the documents.

The Deutsche Bank case is one of several in which Trump is fighting to prevent the release of his tax returns and other financial records.

Federal judges in New York and Washington have ruled in favor of House subpoenas for Trump’s financial documents. Trump’s lawyers have asked the Supreme Court to block both of them.

In one case, Manhattan District Attorney Cyrus Vance seeks records as part of a criminal investigation. In the other, a House committee wants Trump’s longtime accounting firm, Mazars USA, to turn over Trump’s tax returns.

Trump’s lawyers have argued in the Vance case that the president is immune from any criminal grand jury investigation while in office.

Meanwhile, the Justice Department has argued that allowing lawmakers to subpoena records regarding the president’s private business would distract him from his duties, even though the House isn’t trying to get them from Trump himself.

In the Deutsche Bank case, U.S. District Judge Edgardo Ramos ruled in May that the subpoenas passed constitutional muster, had a “legitimate legislative purpose,” and were in the public interest.

Ramos wrote that Trump’s lawyers had made the case that the president and his companies would suffer “irreparable harm” if the committees were to obtain records for about a decade of Trump’s dealings with Deutsche Bank and Capital One.

However, the judge concluded that harm is outweighed by Congress’ constitutional authority to investigate the president. Citing a lengthy list of Supreme Court rulings and other legal precedents, the judge wrote he believes it’s unlikely that Trump will ultimately prevail in the legal fight.

In its ruling, the appeals court recognized that Trump would suffer “irreparable” loss of privacy if his financial records were disclosed to Congress. But the court also said that loss is “somewhat mitigated” because sensitive personal financial information will not be disclosed.

“When Congress conducts investigations in aid of legislation, its authority derives from its responsibility to legislate – to consider the enactment of new laws or the improvement of existing ones for the public good,” she wrote. “Congress has no power to expose personal information for the sake of exposure.”

“Targeted at the President of the United States but issued to third parties,” Livingston wrote, “they seek voluminous financial information not only about the President personally, but his wife, his children, his grandchildren, his business organizations, and his business associates … and make no distinction between business and personal affairs, nor consistently between large and small expenditures.”