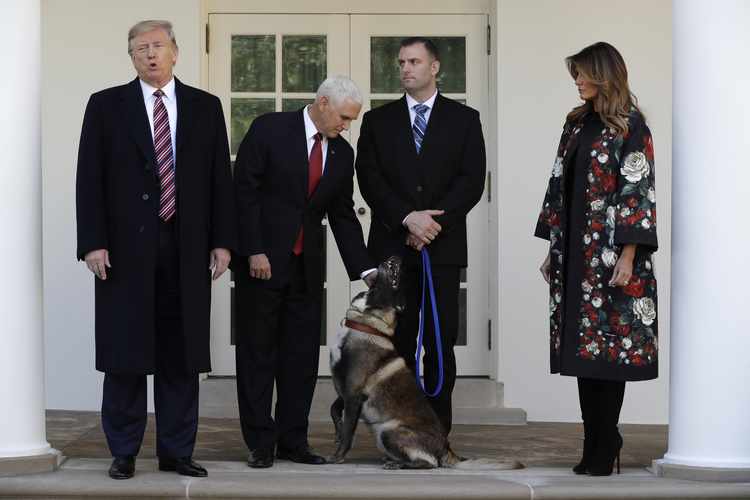 More than four years into his scorched-everything political career, President Trump’s base-only strategy has suddenly gone to the dogs — literally. Sure, he’s imposing more tariffs again and still had to tweet about Lisa Page en route to the 70th anniversary of NATO, but Trump is noticeably not raging about caravans and MS13 and Rep. Ilhan Omar, focusing more on positive things that unite most voters, like pets, freedom and the flag.

Most importantly, Trump traveled to Afghanistan over the holiday to surprise the troops and dine with them on Thanksgiving, a war zone stop he had thus far refused to make nearly three years after Inauguration Day. He said a lot of his usual weird stuff, but instead of bashing the Afghanistan War as some stupid mistake of Presidents George W. Bush and Barack Obama, which he has done before, Trump was there to thank the men and women serving and to tell them they are loved by the American people.

It was the right thing to do and may have resulted from the guidance of pollster Mark Penn, who recently met with Trump to relay the advice he had imparted to then-President Clinton when he was impeached. Penn told Trump to get to work and hit the road to tend to presidential duties while the House of Representatives weighs his fate.

Sure, Trump is still doing a lot of not-normal, destructive stuff like pardoning war criminals in the military — which got the Navy secretary fired and has created distrust between the commander-in-chief and leaders in the service branches — and attacking witnesses on Twitter while they testified under oath before Congress. But he has been more constructive of late, and resisted picking the usual fights.

Though it was buried during the Thanksgiving holiday, Trump signed bipartisan legislation supporting the protests in Hong Kong, a stunning development since Transactional Trump had made clear to President Xi Jinping he would not say anything critical or confront Beijing over the Hong Kong issue while trade talks were pending. It prompted immediate retaliation from China, as expected, but Trump deserves credit for bending to the bipartisan pressure on such a critical issue after the Hong Kong Human Rights and Democracy Act garnered only one “no” vote in both chambers of Congress. While a veto-proof majority meant he would lose in the end, it wouldn’t have been beyond Trump to veto the measure to show China his true interest and that human rights and liberty just aren’t high priorities of his. But now he can boast to voters he has stood up to the Chinese regime on something besides the trade deficit: our nation’s values.

He even recently attended a dignified transfer of remains, which he has publicly lamented is the worst part of his job — as it should be, just without the public lamenting. In Trumpian fashion he let an actor come join him, which likely stunned the grieving families, but Trump was there.

In a dramatic sign he wanted to sell a softer side, the president last week welcomed Conan, the Belgian Malinois who was wounded in the raid that killed ISIS leader Abu Bakr al-Baghdadi in Syria, to the White House. Trump threatened to muzzle Conan and wouldn’t touch him, but he was full of praise, using his most flattering moniker for this new canine pal — “a tough cookie.” Trump announced he had presented the brave pooch with a plaque and a medal. This is no small thing as Trump really doesn’t like animals. He is not only the first president in 150 years not to have a pet in the White House, but he is known to call many of his political enemies “dogs,” in a bad way. He was “embarrassed” when the Pences moved their pets into their official residence in 2017 as reports at the time quoted an adviser saying Trump thought it was “low class.”

Trump also recently held a signing ceremony for legislation expanding on earlier anti-cruelty laws that would now make the distribution of animal “crushing” videos a felony, known as the Preventing Animal Cruelty and Torture Act. Another warm and fuzzy move that surely got great Facebook traffic.

Did you know Congress passed a stopgap spending bill on Nov. 20? Trump quietly signed it, freak-out free. Sure, he could shut down the government again this year, five days before Christmas, but let’s start somewhere.

And while Trump is making no attempts to conduct any bipartisan negotiations with members of Congress — for a repeal-and-replace plan for Obamacare, immigration reform, gun control (that’s just not his thing these days) — at least he’s talking about Congress passing the USMCA when taunting the “Do-Nothing Democrats” on Twitter. He also recently tweeted a drug pricing pitch, which doesn’t always track with reality but is designed to convince voters this enormously critical (and bipartisan) issue is being resolved. In tweets Nov. 22 he promised that Health and Human Services Secretary Alex Azar “and I will soon release a plan to let Florida and other States import prescription drugs that are much CHEAPER than what we have now! Hard-working Americans don’t deserve to pay such high prices for the drugs they need. We are fighting DAILY to make sure this HAPPENS…” It sounds a lot like socialism, and it sure sounds unrealistic, but it beats the migrant caravan.

Trump is also making sure those suburban women who keep voting for Democrats know he is anti-vaping, even if he won’t ban all the addictive flavors kids love because his campaign told him he will lose voters over it. He held a conference on vaping at the White House and sat next to Sen. Mitt Romney. This was no accident, ladies — Trump’s playing nice, oozing concern and working with political adversaries to address a dangerous new addiction epidemic. Or at least the photo op says so.

Will Trump blow up this nice streak in Europe, threaten NATO allies, and send some ghastly impeachment-related tweet while jet lagged and binge-watching delayed television coverage? It’s more than likely. But Christmas is coming, and there are numerous new opportunities for him to be jolly (and normal). Who knows — by the New Year, it could become a habit.

A.B. Stoddard is associate editor of RealClearPolitics and a columnist.