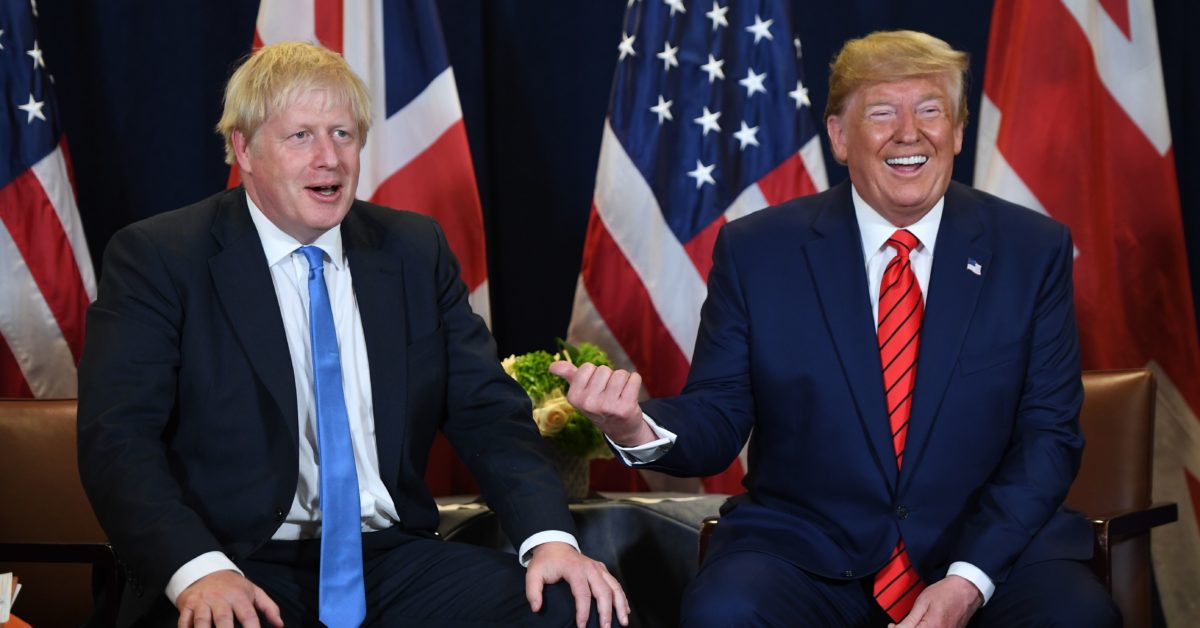 LONDON — The Donald Trump timebomb has been dropped into Britain’s general election campaign.

Trump arrived in London on Monday night for a NATO leaders’ meeting the week before Britain votes to determine when, how and perhaps if it finally exits the European Union. While he will only be in the U.K. until Wednesday, both the governing Conservatives and opposition Labour Party are gearing up for a near-inevitable Trump intervention in British politics.

While Trump has struck up a rapport of sorts with Boris Johnson, the prime minister’s Conservatives want the U.S. leader to keep a low profile during his visit, fearing their fragile poll lead could go up in smoke.

Data from pollster YouGov shows 67 percent of Brits have a negative opinion of the U.S. president, compared to 18 percent with a positive view.

Johnson needs Trump to tread a fine line of being open and encouraging about the prospects of a post-Brexit trade deal with the U.K., while not putting his foot in it in the process. But Trump is hardly known for his balancing acts.

Trump said that Johnson was “fantastic” and Labour leader Corbyn would be “so bad” for Britain.

“We know that the American president is fundamentally incapable of practicing diplomacy in the traditional sense, and has a tendency to make rather unhelpful remarks during press conferences, without care for the sensitivity of domestic political environments,” said Sophia Gaston, managing director of the British Foreign Policy Group, a think tank.

“The huge risk here for Johnson is that Trump emphasizes an ‘America First’ approach, underscoring the difficult reality of the forthcoming trade talks.”

Labour, on the other hand, is hoping Trump’s presence will exacerbate a row over including the National Health Service (NHS) in the future U.S.-U.K. trade talks — which could work to the opposition party’s advantage. Labour strategists calculate that even a hint that the U.K.’s much cherished public health system could be up for sale would work to their advantage.

“Trump will come over, act in the way he does, our media will go bonkers and [Labour leader Jeremy] Corbyn will probably try to pick a fight,” predicted one Conservative politician fighting to hold onto a parliamentary seat in the English midlands. “There will be a lot of heat and not much light generated.”

Trump has already made clear his preferences in the British vote. In a recent phone interview, the U.S. president told his pal, Brexit Party leader Nigel Farage, that Johnson was “fantastic” and Corbyn would be “so bad” for Britain.

But the “worst case” fear, according to another Conservative who is fighting to hold their seat, is of Trump “just coming over and being smart and thinking he can help. What he thinks is helpful is not necessarily helpful.”

A senior U.S. administration official told reporters ahead of the trip that the president was “well aware” of the need to keep his nose out: “He is absolutely cognizant of not … wading into other countries’ elections.”

Trump has shown no such reticence in the past. During a visit in 2018, he used an interview with the Sun newspaper to lambast then-PM Theresa May for handing the EU “all the cards” in Brexit negotiations. During his state visit to Britain in June this year, Trump gave Labour a gift when he said the NHS would be “on the table” in any post-Brexit trade deal with the U.S., before later backtracking.

Former Conservative Cabinet Minister Andrew Mitchell, who is fighting to hold his seat in Sutton Coldfield, central England, said there were risks to the Trump visit for Johnson, but he expected the president to abide by the convention of not commenting on internal politics.

A mural in Stokes Croft in Bristol | Matt Cardy/Getty Images

“The problem, of course, is if he is teased or baited by the British media, he may be seduced into saying something newsworthy,” Mitchell said. “A stream of consciousness from the Donald in Twitter mode is unlikely to be helpful.”

Johnson told the BBC’s Andrew Marr show on Sunday that he would meet his U.S. counterpart during the NATO visit. But whether that meeting takes place with other NATO leaders or in the form of a one-on-one remains unclear. Commentators suspect Johnson would rather avoid the optics of a one-on-one meeting, and a press conference with Trump.

Asked by POLITICO at a campaign event in Westminster last week whether he was worried Trump could blow up his election strategy, Johnson said: “I am obviously going to be hosting NATO and look forward to meeting all the NATO heads of government coming to that meeting.”

Johnson even issued a warning to Trump, during a radio phone-in last week, to keep quiet while he visits the U.K. “We have very close relationships and friendships with the United States at every level of government,” he told broadcaster LBC. “What we don’t do traditionally as loving allies and friends is get involved in each other’s election campaigns.”

Meanwhile, Labour is already laying the groundwork to kick up a fight with Trump over the possibility of the NHS being included in a trade deal.

Corbyn last week revealed leaked documents from the Department for International Trade showing U.S. negotiators raised drug pricing with their U.K. counterparts in preliminary talks about a deal. The Labour Party made hay with the revelations, claiming the NHS was clearly on the table in trade talks with the U.S., which Johnson has vehemently denied.

Labour’s Shadow International Trade Minister Bill Esterson told POLITICO: “President Trump and his officials have made clear that if Boris Johnson wants a deal with the U.S., it will be at the price of privatization and patient care.”

Gaston, from the British Foreign Policy Group, said Labour will use the issue this week to “maximize the visibility of the Trump-Johnson relationship.”

“We know that President Trump is deeply unpopular with the country as a whole, and that the messages Labour has been promoting around the potential costs of a U.S. trade deal are of genuine concern to voters,” she said.

In truth, the Trump visit could leave none of the parties in the general election campaign very happy.

Corbyn penned letters to both Johnson and Trump on Monday, demanding trade talks between the U.K. and U.S. are put on hold until a list of demands are met, including Trump removing reference to pharmaceuticals from his trading objectives and dropping the request for “full market access” to British public services.

“I am sure you understand that our coming general election on December 12 means the British public need urgent clarity that our NHS is genuinely off the table in U.K.-U.S. trade talks and will not be exposed to higher costs from U.S. drugs companies,” he wrote to Trump.

But Tories insist the claims over the NHS are not resonating on the doorstep.

One staff member who has been pounding the streets said Brits already recount negative stories about the NHS and do not believe it will get worse. The staffer drew a parallel with the Remain campaign in the 2016 EU referendum, which warned people who were already desperately poor that they would get poorer if Britain voted to quit the bloc.

“People are not buying this ‘NHS for sale’ claim,” another senior Tory official said, noting that the public does not believe drugs will get more expensive as part of a trade deal with the U.S. The official added that the Trump visit has not been raised in any election campaign briefings, so the party leadership cannot be too concerned.

But the president could add fuel to the NHS row if he goes off script.

“If he comes out with something that plays into Jeremy Corbyn’s hands about the NHS then it won’t be good,” the first senior Tory official said. “But if he comes out and says ‘I like Boris and we could definitely do a trade deal and the NHS is not a part of our agenda’ then it probably won’t hurt the prime minister.”

However, Trump’s visit and the NATO meeting might not be all plain sailing for Labour either.

“While the [Labour] manifesto commits to maintaining the fundamentals of our existing defense capabilities and spending, Jeremy Corbyn’s ambivalence towards NATO and other aspects of the rules-based world order are well-established,” Gaston said. “We can therefore expect that the Conservatives will want to highlight Corbyn’s ‘unsuitability’ for high office, portraying him as an unstatesmanlike candidate incapable of prioritizing national security.”

In short, the Trump visit could leave none of the parties in the general election campaign very happy.

Alan West, a former Royal Navy chief who sits in the House of Lords for Labour but is no fan of Corbyn, declared: “Having this NATO summit just in the middle of our election campaign could not have been a worse time, really … And having Donald Trump coming is a recipe for all sorts of trouble.”