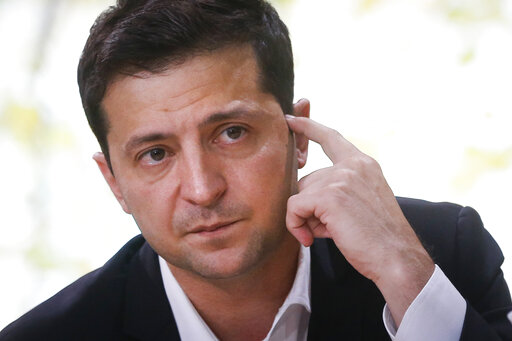 Ukrainian President Volodymyr Zelensky said in a recent interview that he did not discuss a “quid pro quo” with President Donald Trump involving an investigation into Trump’s political rivals. But he did not exonerate Trump of all wrongdoing, as Trump inaccurately claimed.

In a joint interview published Dec. 2 by Time, France’s Le Monde, Germany’s Der Spiegel and Poland’s Gazeta Wyborcza, Zelensky condemned the hold on U.S. aid while Ukraine was at war with Russia and said he didn’t view his talks with Trump “from the position of a quid pro quo.”

Trump hailed the interview on Twitter, writing that Zelensky “has just again announced that President Trump has done nothing wrong with respect to Ukraine and our interactions or calls.”

Breaking News: The President of Ukraine has just again announced that President Trump has done nothing wrong with respect to Ukraine and our interactions or calls. If the Radical Left Democrats were sane, which they are not, it would be case over!

He later repeated the claim while speaking to reporters at the White House.

“That should be case over,” Trump said in reference to the House’s impeachment inquiry into whether Trump conditioned U.S. aid to Ukraine and a White House meeting on Zelensky’s announcement of investigations into former Vice President Joe Biden and the 2016 election.

Thank you to President Zelensky. Case over. The Do Nothing Democrats should finally go back to work! https://t.co/XrJSUsm9Wq

Zelensky did not literally say that Trump did nothing wrong. Here are his translated remarks in context.

The joint interview with Zelensky was conducted in Russian, a Time spokesperson told us. Berlin-based Time reporter Simon Shuster, who was born in Russia, translated Zelensky’s responses into English.

Before talking about U.S. politics, Zelensky answered questions on the conflict with Russia in eastern Ukraine and his expectations for a Dec. 9 summit at which the leaders of France, Germany, Russia and Ukraine are hoping to negotiate a peaceful resolution.

Asked about the U.S. role in this peace process, Zelensky stressed the importance of U.S. support for Ukraine. He said he hoped the United States would use its power “to influence Russia, to make everyone see that this (war) is a big tragedy, and that it must end.”

“I would never want Ukraine to be a piece on the map, on the chess board of big global players, so that someone could toss us around, use us as cover, as part of some bargain,” he said. “As for the United States, I would really want — and we feel this, it’s true — for them to help us, to understand us, to see that we are a player in our own right, that they cannot make deals about us with anyone behind our backs.”

“The United States of America is a signal, for the world, for everyone,” he continued. “When America says, for instance, that Ukraine is a corrupt country, that is the hardest of signals.”

When asked at what point he sensed that there was a link between the freeze on U.S. aid for Ukraine and the investigations Trump and his allies wanted, Zelensky dismissed the idea that there was a clear trade-off at play.

“Look, I never talked to the president from the position of a quid pro quo. That’s not my thing,” he said. “I don’t want us to look like beggars. But you have to understand. We’re at war. If you’re our strategic partner, then you can’t go blocking anything for us. I think that’s just about fairness. It’s not about a quid pro quo. It just goes without saying.”

The interview shows Zelensky was critical of the Trump administration’s block on military aid to Ukraine amid its war with Russia. At the same time, Zelensky said his conversations with Trump were not about a quid pro quo, which aligns with what the leader has said since the controversy started.

On Sept. 25, the day the White House released a readout of Zelensky’s July 25 phone call with Trump, he appeared at a joint press conference with Trump and said the call was “normal” and that “nobody pushed me.”

In October, Zelensky said “no blackmail” occurred during the call.