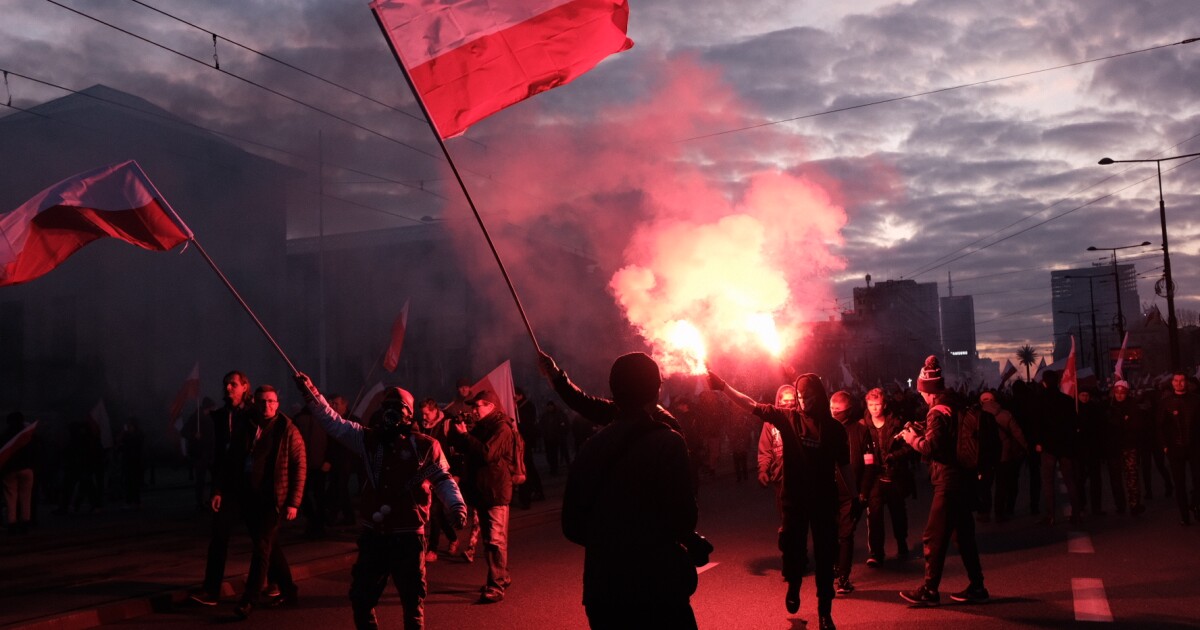 Majczak, a 40-year-old sailor from the Polish city of Gdansk, and his family had traveled more than 200 miles to the country’s capital, Warsaw, in November to participate in the annual Independence Day march, which he said was a way of “manifesting our Polishness.”

Analysts monitoring extremist groups have called the event one of Europe’s biggest gatherings of ultra-fascists, extreme right-wingers and nationalists. Participants throw firecrackers, pose with flares and don jackets and sweaters reading, “Death to the enemies of the fatherland.” Many of them say the greatest threat to Poland is Jewish property restitution claims.

“It is an audacious robbery attempt,” Majczak said in Warsaw’s historic city center.

Poland, one of 47 nations that approved the Terezin Declaration in 2009 to ensure “assistance, redress and remembrance for victims of Nazi persecution,” is the only major former Eastern Bloc country to do nothing to return private property confiscated by Nazis or nationalized by the communist government, according to the World Jewish Restitution Organization.

Activists concerned about anti-Semitism point to the country’s lack of redress along with the emergence in recent years of the nationalist Law and Justice party and European Union data indicating that a large number of Jewish people in many of the bloc’s 28 countries, including Poland, feel negative treatment has increased in recent years.

Poland’s far-right activists have started to vehemently oppose any restitution claims and are advocating for a bill that would not just ban restitution, but also criminalize it. The proposed legislation forbids “any actions aiming to accommodate restitution claims pertaining to heirless property” and calls for a prison term of six months to five years for anyone breaking the law, with an exception for civil servants, who — should the draft pass without any amendments — could face up to 25 years in prison.

Many people are concerned that restitution would hurt them because the country would have to pay so much that its ability to provide quality social services, education and other benefits would suffer.

Restitution claims are “a big threat,” to Poland, said Krzysztof Bosak, a newly elected member of Parliament from the hard-line nationalist Confederation Liberty and Independence party.

“We believe we need to strengthen legal protection of Polish property as we fear behind-the-scenes negotiations [between Polish officials and international organizations] pertaining to restitution claims,” Bosak said.

Konstanty Gebert, a journalist and fellow at the European Council on Foreign Relations who is one of the most outspoken members of the Jewish community in Poland, said Terezin is about acknowledgment and due process, not about driving Poles out of their homes.

Poland was home to more than 3 million Jews before World War II. Many were killed during the Holocaust and the vast majority of survivors later emigrated to the United States. Heirless property was taken over by the communist regime that ruled Poland until the end of the Cold War. A group of experts commissioned by the Israeli government 13 years ago put the combined value of appropriated Jewish property at $30 billion.

In February, Secretary of State Michael R. Pompeo visited Poland and urged the government to move ahead with property restitution legislation. In May, thousands of demonstrators in Poland protested restitution, many of them saying that Jewish organizations claimed $300 billion and some referring to Jews as “Holocaust hyenas” on banners.

At last month’s Independence Day march in Warsaw, tens of thousands of participants heard messages blasted from loudspeakers warning people that restitution will translate into “poverty and destitution for your child.”

Yelling into a microphone, Robert Bakiewicz, the organizer of the march, said that Poland’s elites — the politicians and the wealthy — were “not saying a word when Jews want to plunder our fatherland.”

Members of the Law and Justice party, which came to power in 2015, have said the party opposes any restitution of Jewish property. Party representatives declined to comment for this story.

The Polish government has also pointed to its role as a victim of Nazi Germany, heroizes those who helped the Jewish community, and ignores Polish collaborators, going as far as to criminalize any mention of “Polish concentration camps.”

“If you combine the statements by the Polish government and the Confederation,” Gebert said, “the image that emerges is that Poles lost their lives trying to save Jews, and now the ungrateful Jews are trying to demand compensation from the Polish people.”

Despite the hateful language used by right-wingers and substantial support for anti-restitution messages among the general public and in Polish media, many Poles do not believe the nation has a serious problem with anti-Semitism.

Witold Wrzosinski, co-founder and co-director of the Foundation for Documentation of Jewish Cemeteries in Poland, said that part of what has happened is that anti-Semitic speech has become normalized. It is now “socially and politically acceptable to publicly express anti-Semitic or prejudicial sentiments,” he said.

Gebert said anti-Semitism has become accepted in public speeches despite having been seen as egregious as recently as 15 years ago. The amount of hate mail and threats to Jewish organizations has also increased, he said.

Kasztelan and Hruby are special correspondents.