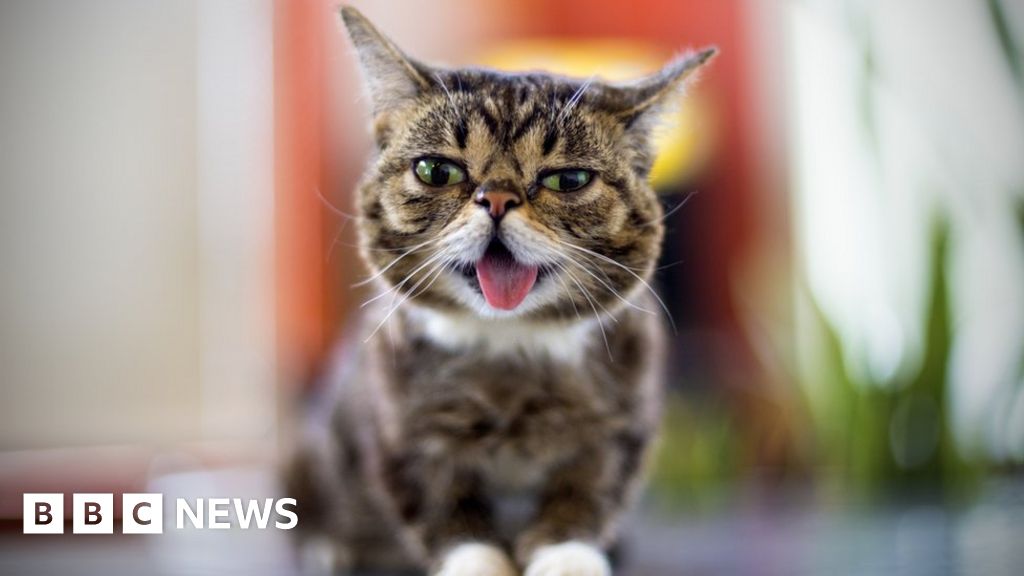 Lil Bub, one of the internet’s most famous cats, has died aged eight.

The cat’s owner, Mike Bridavsky, announced her death to millions of followers on social media on Monday.

Lil Bub was best known for her unusual appearance – bulbous eyes and a protruding tongue. She was rescued as a feral kitten and was born with several disorders, including dwarfism.

“Bub has made a huge difference in the world of animal welfare, and in the lives of millions of people worldwide,” a post on Instagram said.

Lil Bub found online fame because of her unique appearance. Her feline dwarfism meant she stayed kitten-sized throughout her life.

She was also polydactyl, with an extra toe on each paw, and had an underdeveloped jaw and no teeth which caused her tongue to always hang out.

Mr Bridavsky originally adopted Lil Bub as the “runt” of a litter of kittens found by a friend inside a tool-shed in Indiana.

In an interview, he described her “one of nature’s happiest accidents” and insisted she lived a happy, healthy life despite her various health issues.

He created a Tumblr blog for the cat in 2011 and she went viral after photographs of her ended up on the front page of discussion website Reddit.

The attention led to news articles about her and invitations to appear on US television programmes.

Lil Bub went on to gain endorsement deals, merchandise lines and even her own YouTube show and documentary series.

Her owner used her fame to raise money for charity, including help for other cats with special needs through the American Society for the Prevention of Cruelty to Animals.

Before her death, Lil Bub had been suffering from a bone infection which her owner had been sharing updates about to her 2.4m Instagram followers.

Mr Bridavsky announced on Monday that she had unexpectedly died in her sleep on Sunday morning.

This is my first photo with BUB next our last photo together. On the morning of Sunday, December 1st 2019 we lost the purest, kindest and most magical living force on our planet. BUB was cheerful and full of love laying in our bed with us Saturday night, but unexpectedly passed away peacefully in her sleep.. I have always been fully transparent about BUB’s health, and it was no secret that she was battling a persistent and aggressive bone infection. Even knowing this, we weren’t expecting her to pass so soon or so abruptly without warning. I truly believe that she willingly made the decision to leave her failing body so that our family would not have to make that difficult decision ourselves. It is impossible to put into words the profound effect that BUB has had on my life, on the lives of thousands of homeless pets, and on the lives of those of you that have cared for her as if she were your own family. She taught me everything that I know about unconditional love, she brought my wife Stacy and I together, she’s the reason we have our beautiful children Rosco and Lula, and she has been a constant source of warmth and love in our lives for the past 8 years. To say that our family is devastated would be an understatement. But most importantly, BUB has made a huge difference in the world of animal welfare, and in the lives of millions of people worldwide. She has literally saved thousands of lives (both pets and humans), she started the first national fund for special needs pets, she was the subject of groundbreaking genetic and biological research, she’s helped raise over $700,000 for animals in need, and has spread a message of determination, positivity, and perseverance to people all over the world. And even though my heart is absolutely crushed by her graceful departure from planet Earth, I know that her sprit, magic, and overwhelming energy are still with us, reminding us every day to be better. Dearest BUB, I will never forget your generosity, your limitless supply of love, or your uncanny ability to bring so much magic and joy to the world. I am forever honored and humbled that you chose me as your caretaker. Please visit all of us in our dreams o

The owner said his cat had “spread a message of determination, positivity, and perseverance to people all over the world” during her life.

Tens of thousands of people have commented and shared the online posts announcing the cat’s death.

Among those responding on Facebook – where she had more than three million followers – were people who work for animal charities which have benefited from the funds raised by Lil Bub’s owner in his cat’s name.

10) Venus the Two Face Cat (@venustwofacecat), a tortoiseshell cat from the US, 2m followers

8) Tuna (@tunameltsmyheart), a Chiweenie from the US, 2.1m followers

5) Grumpy Cat (@realgrumpycat), a mixed-breed cat from the US, 2.7m followers

Source: Most-followed pets on Instagram worldwide as of September 2019 (Statista)