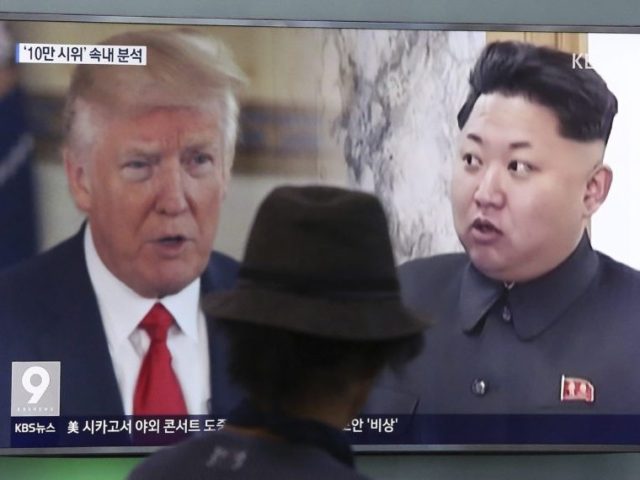 A high-ranking North Korean official called dialogue with the United States a “foolish trick” in remarks Tuesday and warned Washington that it is “entirely up to the U.S. what kind of Christmas gift” North Korea will send it.

The communist regime’s Korean Central News Agency (KCNA) carried the full comments from Ri Thae Song, vice foreign minister for American affairs. In them, Ri protested that North Korea “has heard more than enough dialogue rhetoric” from the United States and would no longer move forward with talks, urging Washington to instead consider “acting in response to the measures taken by the DPRK [North Korea].”

The U.N. Security Council levied unprecedently harsh sanctions on North Korea in late 2017, following that nation’s last illegal nuclear test. To do so, American officials successfully convinced the leaders of two of North Korea’s closest allies, China and Russia, to vote for the sanctions, though reports regularly surface of both violating the sanctions to buoy the North Korean economy.

“The dialogue touted by the U.S. is, in essence, nothing but a foolish trick hatched to keep the DPRK bound to dialogue and use it in favor of the political situation and election in the U.S.,” Ri said in his statement. “The DPRK has heard more than enough dialogue rhetoric raised by the U.S. whenever it is driven into a tight corner. So, no one will lend an ear to the U.S. any longer.”

“The DPRK has done its utmost with maximum perseverance not to backtrack from the important steps it has taken on its own initiative,” he concluded. “What is left to be done now is the U.S. option and it is entirely up to the U.S. what Christmas gift it will select to get.”

Ri did not elaborate on the vague threat to act against America’s interests. The South Korean news agency Yonhap suggested, however, that Ri may have meant that North Korea may soon “restart testing of nuclear weapons and intercontinental ballistic missiles (ICBMs).”

North Korea has not tested a nuclear weapon in two years, though many have speculated that this is the product of their last test almost certainly destroying the Punggye-ri Nuclear Test Site, not of any desire to stop developing weapons. Pyongyang has also continued with short-range weapons development, alarming neighbors like South Korea and Japan.

The Japanese newspaper Asahi Shimbun reported on Monday that North Korea is developing concrete platforms for mobile missile launchers, which could expand the reach of their ICBMs.

“The platforms, each dozens of meters in width and length, are big enough for mobile launchers to fire intercontinental ballistic missiles,” Asahi reported, according to the South Korean newspaper Chosun Ilbo.

The state newspaper Rodong Sinmun, which has been unusually restrained against President Donald Trump and his administration since Trump met with dictator Kim Jong-un on two occasions, carried its usual attacks on the West Tuesday, however, urging North Koreans to resist the allure of prosperous capitalism.

“Even though the Western politicians and media under their thumb idealize capitalism, advertising that it is a ‘typical example’ of sustained development and prosperity whenever an opportunity presents itself, they can never cover up the social evils precipitating its ruin,” Rodong Sinmun asserted. “The gap between the rich and the poor, unemployment, moral decay, etc. are the cancer of capitalism and its fate is destined to sink like a setting sun.”

“The Western world is making desperate efforts to check the collapse of capitalism but it cannot stop capitalism going downhill with anything,” writer Ri Hak Nam affirmed.

KCNA also followed up the government’s warning to the United States with a reminder of its close ties to China. China and North Korea are still technically at war with South Korea and America, as neither side signed a peace treaty to end the Korean War, which began in 1950 and is currently in an “armistice” status that has kept armed combat at bay since 1953. According to KCNA, Beijing sent one of its most illustrious symphony orchestras to regale Pyongyang’s elite at the Mangyongdae Schoolchildren’s Palace on Monday.

Trump and Kim met a second time this February in Hanoi, Vietnam, but Trump abruptly walked out of the summit, stating that Kim’s team was too intransigent to make the talks worth it.

Following the failed Vietnam summit, North Korean officials loudly denounced Secretary of State Mike Pompeo, demanding Trump fire him if he wished to continue dialogue with Pyongyang. In August, North Korea repeated that demand, stating it was ready for dialogue, but not with him.

Trump has not at press time heeded the warning to fire Pompeo.