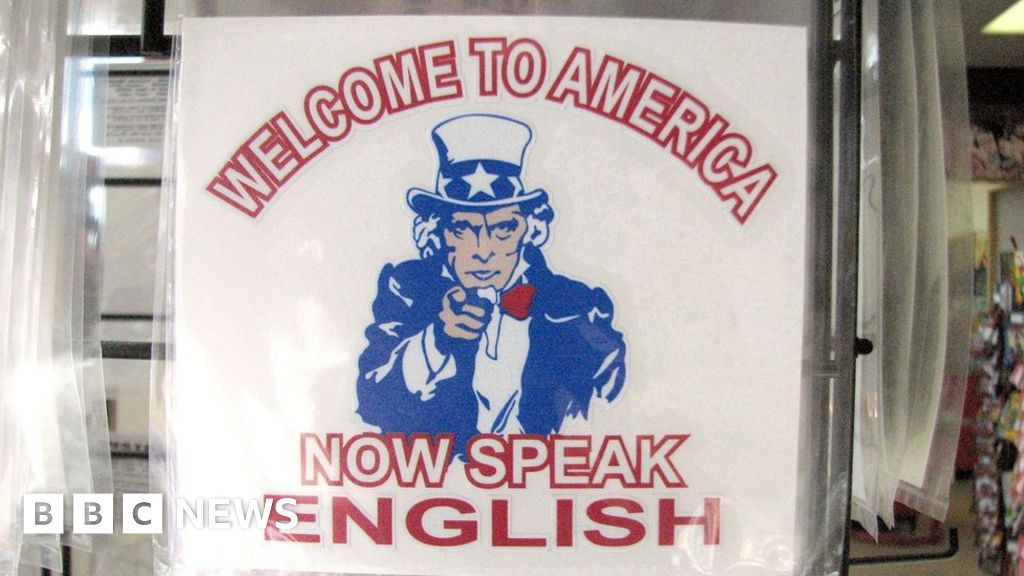 There are an estimated 41 million Spanish speakers in the US and that number is increasing. Yet there is also a small but vocal movement to restrict its spread.

“This is a country where we speak English. It’s English. You have to speak English!” Donald Trump often said during his 2016 US presidential campaign.

The then presidential candidate made this point to cater to his supporters but he also used it as a strategy against some of his adversaries in the race for Republican Party nomination.

One particular target was rival and former Florida governor Jeb Bush, who sometimes expressed himself in Spanish.

Mr Trump’s tough approach to immigration paid off among sectors of the electorate that somehow share his opinion that “in the States United you have to speak English”.

However, Mr Trump’s demand has no legal basis: – the US has no official language.

The message of these videos is clear. If you are in this country, you have to speak its language.

Those viral attacks generally do not occur against tourists who speak Dutch, French or Italian, for example. They are usually directed against people who speak Spanish and who, because of their work or simply because of their physical appearance, are classified as immigrants.

“These reactions against people who speak Spanish are probably not new,” Heidi Beirich, a researcher at the Southern Poverty Law Center (SPLC), tells BBC Mundo. “But Donald Trump unleashed feelings that were not expressed publicly so often before.”

The SPLC monitors hate groups in the US, which they define as any organisation that – based on its official statements or principles, the statements of its leaders, or its activities – has beliefs or practices that attack or malign an entire class of people, typically for their immutable characteristics.

In this sense, the SPLC qualifies as hate groups several organisations that it considers anti-immigrant, such as the Federation for American Immigration Reform (FAIR) and the Washington DC-based Center for Immigration Studies (CIS).

Also on their list is ProEnglish, which advocates for English to be designated as the official language of the United States.

All of them were created in recent decades by John Tanton, a white American far-right nationalist, who died in July of this year. Mr Tanton founded at least 12 anti-immigrant organisations, six of which have been designated hate groups by the SPLC.

The aforementioned ProEnglish is one of the main organisations pushing the “English Only” movement, also known as “English First” or “Official English” movement.

Part of ProEnglish’s official platform states: “In a pluralistic nation such as ours, the function of government should be to foster and support the similarities that unite us, rather than institutionalise the differences that divide us.”

The organisation focuses its efforts on lobbying to convince legislators and public opinion of the need to adopt English as an official language at all levels of government.

In addition, the group calls for an end to bilingual education in favour of language immersion programs in English in American public schools.

While ProEnglish establishes on its website that “the right to use other languages must be respected”, the group has been criticised by those who consider their agenda to be discriminatory.

“They are careful to be called ProEnglish and not ‘anti-Spanish’. But it is clear that their ideology is supremacist, referring to English as a symbol of US cultural heritage when this country has never been a project only in English,” says SPLC researcher Heidi Beirich.

Another of the organisations that stands out in the campaign to make English the official language is US English, founded in 1983 by Democratic Senator SI Hayakawa, who was of Japanese ancestry.

Its members say they have nothing against people who speak languages other than English, but they think that immigrants who know English are more successful and can carve out a better future in the US.

They also consider that the translation costs that government agencies incur on could be invested in other matters.

BBC Mundo tried unsuccessfully to interview representatives from ProEnglish and US English.

The discussion about English as an official language in the US is not new.

In 1753, US founding father Benjamin Franklin expressed his fears that the growing population of immigrants of German descent would make English a minority language. In 1919, then US President Theodore Roosevelt stated his belief. “We only have room for one language in this country, and it is English.”

During the 1960s Civil Rights movement, the US Congress passed several laws that guaranteed citizens’ access to essential public documents – such as ballots – in languages other than English. But at the same time, nationalist and English Only movements gained strength.

Geoff Pullum, professor of general linguistics at the University of Edinburgh and co-author of the Cambridge Grammar of the English Language, says there are two broad issues.

“It is truly amazing that both these dreadful and stupid ideas are still alive. They should have died in the 1980s. If it is made merely a law that English should be used for government, then one day when the population of New Mexico or Arizona or California has reached 51% Hispanic, a law could be passed to override that!”

“It has been found through careful testing that accepting bilingualism or bidialectalism in the classroom, and transitioning students gently toward the standard language or dialect, works better, much better, than proscribing rival languages or dialects,” he says.

He believes the “English Only” movement is driven mostly by hostility towards immigrants and their languages and cultures.

Currently, 32 US states have English as the official language. Basically this means that the governments of those states have to offer all their information and documentation in English.

But similarly, state governments are obliged to provide information in other languages when it comes to health or public safety issues.

As for the federal government, all attempts to make English the official language by law have failed. Since 2005, Republican Congressman Steve King has submitted every two years the English Language Unity Act to the US Congress.

But the bill has never obtained the necessary legislative support.

That does not prevent the promoters of the idea from continuing to raise their voice.

“The attacks that we now see on people who speak Spanish were already happening before,” says Ms Beirich.

“But when you are the subject of such an attack and you know that millions of people share your attacker’s vision, including the president of the United States, you feel much more vulnerable,” she concludes.

This article is part of ¿Hablas español?, a BBC road trip around the US to show the power of the Spanish language and Latinos in the age of Trump. You can find out more at BBC Mundo