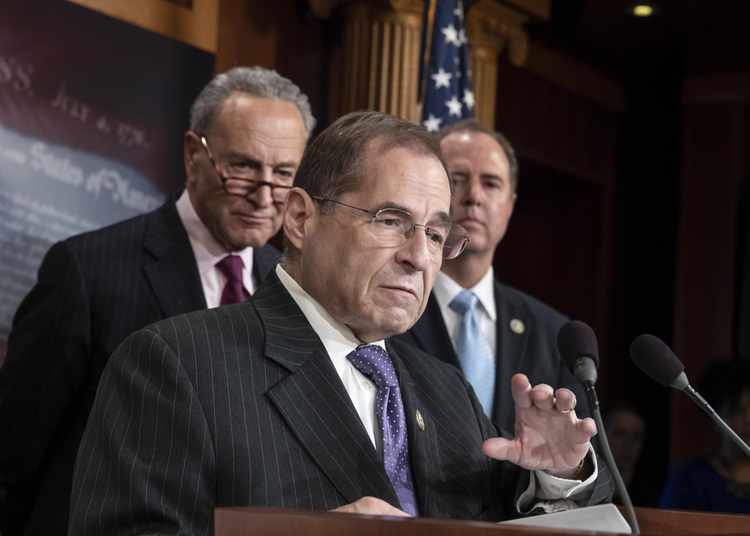 On Twitter, many Democrats say all they want for Christmas is Trump’s impeachment and removal – even though they understand his ouster isn’t in the cards given Republicans’ control of the Senate.

Stephen Colbert, in his latest episode of “Don and the Giant Impeach,” even riffed about having an “impeachment Advent calendar” where “every day you open the door and get a piece of candy” – “It’s so exciting!”

The nation as a whole, however, isn’t so giddy. Americans are nearly evenly divided on the impeachment inquiry – roughly half of voters support it and half do not, according to several recent polls.

And those figures stayed static even after two weeks and more than 30 hours of televised hearings last month, failing by nearly every measure to generate a flood of new support for the inquiry.

With feelings about Trump so divided and entrenched, average Americans aren’t likely to suddenly start tuning into the Washington drama looking to be swayed one way or the other – especially in the crush of the holiday season when time is already a precious commodity.

In fact, if anything, the rush to impeach Trump by Christmas – a seemingly arbitrary deadline — could backfire, as some Democrats have already reportedly started to worry. Other Democrats argue that time is of the essence, as a weeks-long Senate trial early next year could ground two of the top contenders in the presidential contest who would otherwise be campaigning in the critical early voting states.

But if Democrats are in a timing bind, it’s one of their own making and a quandary Trump and his Republican allies have been quick to exploit.

This week, Trump slammed Democrats for holding an impeachment hearing while he’s in London for the NATO summit. “Not nice!” the president tweeted. Secretary of State Mike Pompeo criticized the timetable as “very unfortunate,” and Trump ally Rep. Mark Meadows accused House Judiciary Democrats of “purposefully” scheduling the hearing during the “long-planned NATO conference.”

“Extremely poor form, and another instance of an unfair and unserious process,” he tweeted.

Chances are, most voters aren’t all that concerned about the impeachment distraction during a meeting of world leaders, and they’ll be increasingly tuned out as the holiday season revs into full gear.

Democrats have cited the timing of House Republicans’ 1998 impeachment vote on Bill Clinton just days before Christmas as a way to justify the 2019 scheduling.

“For all the GOP members who now are arguing that impeachment is going too fast (it was too slow last week) remember Clinton’s impeachment hearings opened the first week of October and finished 6 days before Christmas,” tweeted Joe Lockhart, who served as White House press secretary during President Clinton’s impeachment. “Move on to the next excuse, please.”

Clinton’s impeachment was a similarly partisan crusade, and a majority of Americans opposed it. House Republicans ended up losing seats in both 1998 and 2000, though Democrats didn’t gain enough to capture control of the chamber either time.

Impeachment this time around will be a similar gamble for Democrats. Even the best polls for them show the needle moving in their favor just two points – within the margin of error — after the first round of hearings last month. A Politico/Morning Consult poll out last Tuesday found that voters backed the investigation by a five-point margin, 48% to 43%, compared with a three-point margin the week before.

Voter sentiment about impeachment in key swing states is more opaque, but the most recent survey in the critical battleground of Wisconsin signals trouble for Democrats. A Marquette University Law School poll of registered voters in the state, conducted during the first week of hearings, showed 47% of respondents approve of the job Trump is doing, while more opposed than supported impeachment, 53% to 40% — figures similar to those before hearings began in October.

The jury is still out in other battleground states. Before the hearings began, data from a poll financed by the Democratic super PAC Priorities USA showed a narrow plurality of voters supporting impeaching and removing Trump from office across Florida, Michigan, Wisconsin and Pennsylvania, four states that went for the president in 2016. Those states in aggregate supported impeachment and removal 49% to 45%, according to that poll.

But it’s been more than two weeks since those surveys were conducted, so time will tell if Democrats will pay a price for making Christmas the finish line for their impeachment sprint.

Trump is already making mincemeat out of liberals’ “war on Christmas.” This year, that war includes ousting Trump with little regard to the spirit of the season. If Americans tune out, as most already have, the act of impeaching a president may have even less impact in the new year than Democrats are anticipating.

As Colbert has put it, it may be the “impeachiest season of all,” but if more battleground voters don’t buy in, it will be 2020 Democrats’, not Trump’s, downfall.