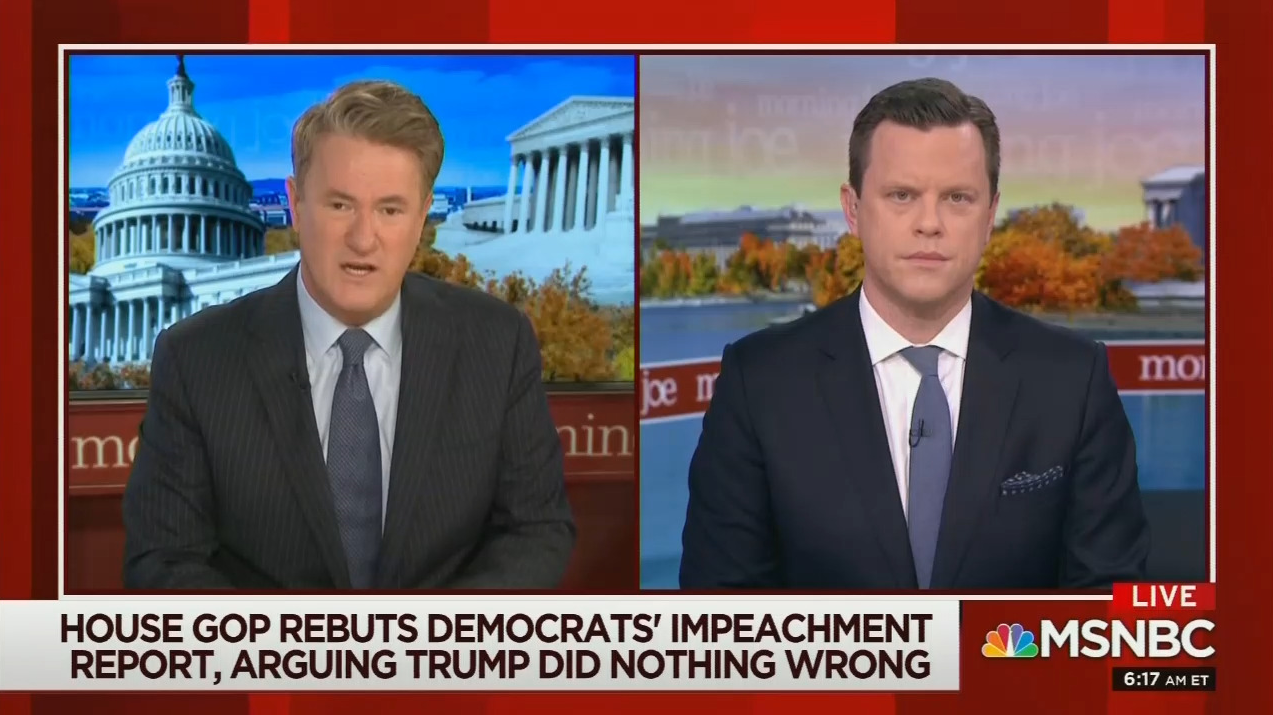 On Tuesday’s Morning Joe, MSNBC anchor Joe Scarborough launched into a bitter anti-Trump screed demanding that House Democrats expand the impeachment inquiry in order to “show the American people the full breadth and the full scope of Donald Trump’s corruption” and expose the supposed “lawlessness” of the administration.

After trashing a report from Republicans on the House Intelligence Committee concluding that the President committed no impeachable offense, Scarborough proclaimed: “The President clearly violated his oath of office in what he did, it was easily proven, it’s been proven over the past several weeks. He committed bribery.”

The host went so far as to invent a fictional quote from Trump’s phone call with the president of Ukraine: “He bribed a foreign leader, said, ‘Listen, I will actually give you $400 million in military aid but you have to give me dirt on my political opponent.’” Scarborough complained: “He got caught red handed. The Republicans aren’t doing anything about that.”

Clearly upset that the GOP wasn’t going along with Democratic attempts to overturn the results of the 2016 election, Scarborough demanded: “So the question is this, if they’re going to act in such bad faith….why not expand this impeachment inquiry?” He proceeded to list all of the supposed crimes the left have accused the President of over the past three years:

Working himself into a frenzy, Scarborough turned to co-host Willie Geist and ranted: “I mean, there is nothing but lawlessness in this administration. Shouldn’t the United States Congress go on record and really show the American people the full width of this corrupt, corrosive administration?”

Scarborough concluded: “…after two weeks of damning testimony….Republicans have no legs to stand on legally or factually.” He again implored liberal lawmakers to pile up more partisan charges against Trump, all for the sake of “history”:

The urging from Scarborough echoed Meet the Press moderator Chuck Todd, who during NBC News impeachment hearing coverage on November 21 feared that Democrats “don’t have a closer yet” and needed to hold more hearings.

MIKA BRZEZINSKI: Meanwhile, House Republicans are hitting back with their own minority report, arguing that Democrats have failed to establish that President Trump committed any impeachable offenses. A copy of the 123-page report says this: “Despite their best efforts, the evidence gathered during the Democrats’ partisan and one-sided impeachment inquiry does not support that President Trump pressured Ukraine to investigate his political rival to benefit the President in the 2020 presidential election. The evidence does not establish any impeachable offense.”

House Intel chairman Adam Schiff hit back at the GOP report, writing in part, “Tellingly, the minority dismisses this as just part of the President’s outside-the-beltway thinking. It is more accurately outside the law and Constitution and a violation of his oath of office.” And, Joe, I just – I’m trying to envision that picture of the Republicans putting together – House Republicans putting together that report. You have would have to literally put on blinders to write it that way.

JOE SCARBOROUGH: Well, you actually would just have to go into it going…

SCARBOROUGH: …“This guy’s guilty as hell, he’s as guilty as hell, we can’t argue the facts because the facts are not on our side. We can’t argue the law because the law’s not on our side. We just have to argue.” And that’s all they’ve been doing. They’ve been making fools of themselves over the weekend. They have been adopting, as we said, Vladimir Putin’s talking points. Talking points that the intelligence community warned them was part of a Russian propaganda effort. But they were so desperate to defend the President of the United States instead of the United States of America itself, that they actually pushed – pushed these talking points.

Which I think, Willie, it just – it begs the question at this point in the proceedings, the Democratic Party and Nancy Pelosi, and I certainly understood this, they wanted to narrow the focus to Ukraine, they wanted to do that to keep it simple. The President clearly violated his oath of office in what he did, it was easily proven, it’s been proven over the past several weeks. He committed bribery. He bribed a foreign leader, said, “Listen, I will actually give you $400 million in military aid but you have to give me dirt on my political opponent.” He got caught red handed. The Republicans aren’t doing anything about that.

So the question is this, if they’re going to act in such bad faith that they’re now assets of Russia using, again, Vladimir Putin’s propaganda that the intel communities, all 17 intel agencies have struck down, why not expand this impeachment inquiry? Why not bring up the illegal payoff to Stormy Daniels a week or so before the election that has a man sitting in jail who helped orchestrate that illegal payoff? Because that illegal payoff would have landed any senator, would have landed any member of Congress, would have landed any candidate for any federal office in a federal penitentiary. So why don’t they expand it to those illegal acts? To the ten acts in the Mueller Report that very clearly laid out obstruction of justice?

Why not show the American people the full breadth and the full scope of Donald Trump’s corruption? Especially coming on the heels of an attorney general trying to run roughshod over, you know, an inspector general’s upcoming report. An attorney general who’s lied to Congress already, committed – I mean, there is nothing but lawlessness in this administration. Shouldn’t the United States Congress go on record and really show the American people the full width of this corrupt, corrosive administration?

WILLIE GEIST: Well, the Democrats in the House, the plan had been to get a vote before the end of the year. That’s gonna be tough now already based on the schedule that they’ve laid out, with Judiciary now bringing in some more witnesses and Nadler starting his chapter in the story. So maybe they do decide to open it up at this point, because that 123-page document put out by Republicans now enshrines and confirms what we’ve heard from them all along, which is that they’re going to look the other way come hell or high water.

The idea that you can sit and listen to those two weeks of testimony from nonpartisan officials, many of whom worked in the Trump administration, many of whom were appointed by the Trump administration, and think that nothing went wrong here, there are was nothing to see here, that they concede no points, that he didn’t do anything wrong, then that’s just willful. And you have a group of people who are sitting and listening to that testimony, obviously with their minds made up. We knew that when we would hear Devin Nunes’s opening statements that the mind was made up.

But these are not people who are going to be swayed. They were not people who, perhaps, were ever going to be swayed. People in the Senate that we see out talking publicly, Senator John Kennedy again yesterday waving op-eds from Politico and other sources saying, “No, it was Ukraine that meddled.” Despite all the evidence from the intel agencies, despite Fiona Hill’s warning to the congressmen in that room that, that was a conspiracy theory, that is was irresponsible to chase that conspiracy theory.

The idea, Joe, that Republicans could have sat in that room or watched on television, if they weren’t on the committee, for those two weeks and listened to those witnesses and conclude in 123 pages there that there was nothing to see here is preposterous and it tells us what we probably knew all along, which is they were never going vote for impeachment in the first place.

SCARBOROUGH: Right, and their takeaway, Mika, is this. Their takeaway, after two weeks of damning testimony, is, one, that the only way they defend the President is by first, again, using propaganda from Russia that 17 Intel agencies have struck down and that the intel community actually warned them not to use. Said that Vladimir Putin has been using it for two years. That’s one of their defenses.

Their second defense is saying that – is pointing to polls that show a majority of Americans want Donald J. Trump impeached and removed from office. 50% of Americans want him impeached and removed from office. Bill Clinton, at the height of impeachment in the late ’90s, only 29% wanted him removed. So Republicans have no legs to stand on legally or factually. And if they’re going to show such bad faith that they’re actually letting Vladimir Putin send them their talking points. I think Democrats need to expand this. They need to bring in all of the high crimes and all of the misdemeanors that this president has committed and lay it bear not only for the American people, but for history, for future generations to look back and see that at least one branch of this government was willing to be held accountable. Stand up and be counted to speak truth to the President of the United States, his corrupt attorney general, and a political party that’s now taking marching orders and their talking points from Vladimir Putin.