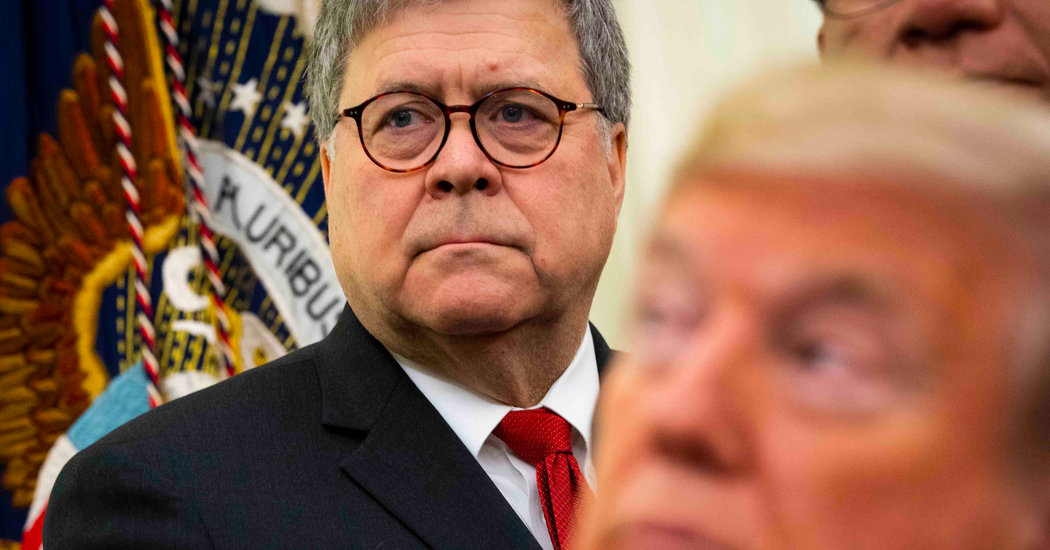 WASHINGTON — Attorney General William P. Barr has told Justice Department officials that he is skeptical of a conclusion by the department’s inspector general that the F.B.I. had sufficient information to open the investigation into whether any Trump associates conspired with Russia during the 2016 presidential race, according to two people familiar with the conversations.

Should Mr. Barr rebut the inspector general’s assessment, due out next week in a highly anticipated report, Mr. Trump’s allies will most likely use that pushback to dismiss the work itself. The review is expected to contradict some of the unfounded theories about the 2016 election that the president and his allies have promoted.

His views are sure to inflame critics of Mr. Barr, who have accused him of siding with the president over the rule of law in his handling of the special counsel’s findings and in a recent speech in which he defended Mr. Trump’s use of executive authority. While it is a part of the executive branch, the Justice Department has typically sought to maintain some independence from the White House to guarantee that justice is applied fairly and not wielded as a political cudgel.

Mr. Barr’s skepticism could place more pressure on John H. Durham — the federal prosecutor who is conducting a separate criminal inquiry into the roots of the Russia investigation — to find evidence backing Mr. Barr’s position. Mr. Durham has already unearthed some evidence that supports Mr. Barr’s uncertainty of the inspector general’s findings, according to a lawyer involved in the Durham inquiry.

The attorney general has also expressed skepticism at the F.B.I.’s decision to investigate Mr. Trump’s own ties to Russia and whether he obstructed justice. It is unclear whether the report by the inspector general, Michael E. Horowitz, will address that.

Mr. Barr has privately praised Mr. Horowitz for his work and has not made clear whether he will publicly disagree with the report. It is standard practice for the Justice Department to submit to the inspector general a written response to his findings, which is then included in the final assessment. Mr. Barr could use that opportunity to issue a formal rebuttal, or he could make a public statement of some other kind.

“The inspector general’s investigation is a credit to the Department of Justice,” the department’s spokeswoman, Kerri Kupec, said in a statement on Monday night. “Rather than speculating, people should read the report for themselves next week, watch the inspector general’s testimony before the Senate Judiciary Committee, and draw their own conclusions about these important matters.”

It was not clear what Mr. Barr based his uncertainty on. The threshold to open the Russia investigation was not particularly high. The F.B.I. can open a preliminary inquiry based on “information or an allegation” that a crime or threat to national security may have occurred or will occur, according to bureau policy. Typically, agents open counterintelligence investigations with a small amount of evidence, Lisa Page, a former F.B.I. lawyer who has also been a target of Mr. Trump’s ire, testified privately to congressional investigators last year.

The conclusion that the F.B.I. had enough evidence when it opened the Russia investigation will be part of the long-anticipated report that wraps up Mr. Horowitz’s nearly two-year inquiry into aspects of the case, including its origins and whether the F.B.I. abused its surveillance powers when it sought a wiretap of a former Trump campaign adviser.

While Mr. Horowitz is expected to sharply criticize the F.B.I.’s top leaders, he is not expected to find that any of the bureau’s officials acted out of political bias against Mr. Trump when they decided to investigate links between his associates and Russia. Ultimately, Mr. Horowitz concluded that the F.B.I. violated no rules when it began its delicate inquiry, work that not only thrust the bureau into a politically treacherous position, but has also overshadowed much of Mr. Trump’s presidency.

Mr. Horowitz’s “excellent work has uncovered significant information that the American people will soon be able to read for themselves,” Ms. Kupec said in her statement.

The special counsel, Robert S. Mueller III, eventually took over the Russia inquiry and affirmed that Russia had interfered in the 2016 election. But he found insufficient evidence to charge any Trump associates with conspiring with the Russian operation and declined to say whether Mr. Trump obstructed the investigation itself.

Mr. Barr, who has for decades expressed a maximalist view of executive authority, has long questioned whether aspects of the inquiry were legitimate. His skepticism began even before he was attorney general, when he wrote a 19-page memo to Justice Department leaders arguing that Mr. Trump was within his authority to fire James B. Comey as F.B.I. director, which Mr. Mueller was investigating as potential obstruction of justice. During a hearing, Mr. Barr told Congress that he believed that “spying” had occurred on the Trump campaign, and that he wanted to determine whether that surveillance was lawfully predicated.

As Mr. Horowitz worked on his review, senior Justice Department officials have also discussed putting in place procedures and guidelines that would force the bureau to get Justice Department approval before opening an investigation on someone like the president, one person who has been briefed on those conversations said.

Mr. Horowitz also found that a low-level lawyer at the F.B.I., Kevin Clinesmith, altered a document to include false information, and then included it in a packet of information that the F.B.I. used to renew a warrant to secretly wiretap a former Trump campaign adviser.

That information could have been part of the reason Mr. Durham began his work as a departmental review and shifted it in recent months to a full criminal investigation. He is not expected to complete his work anytime soon. His criminal investigation spans not only the F.B.I., the subject of Mr. Horowitz’s report, but also the C.I.A.

Mr. Horowitz will release the more than 400-page report next Monday, and he will testify before Congress about his findings on Dec. 11.