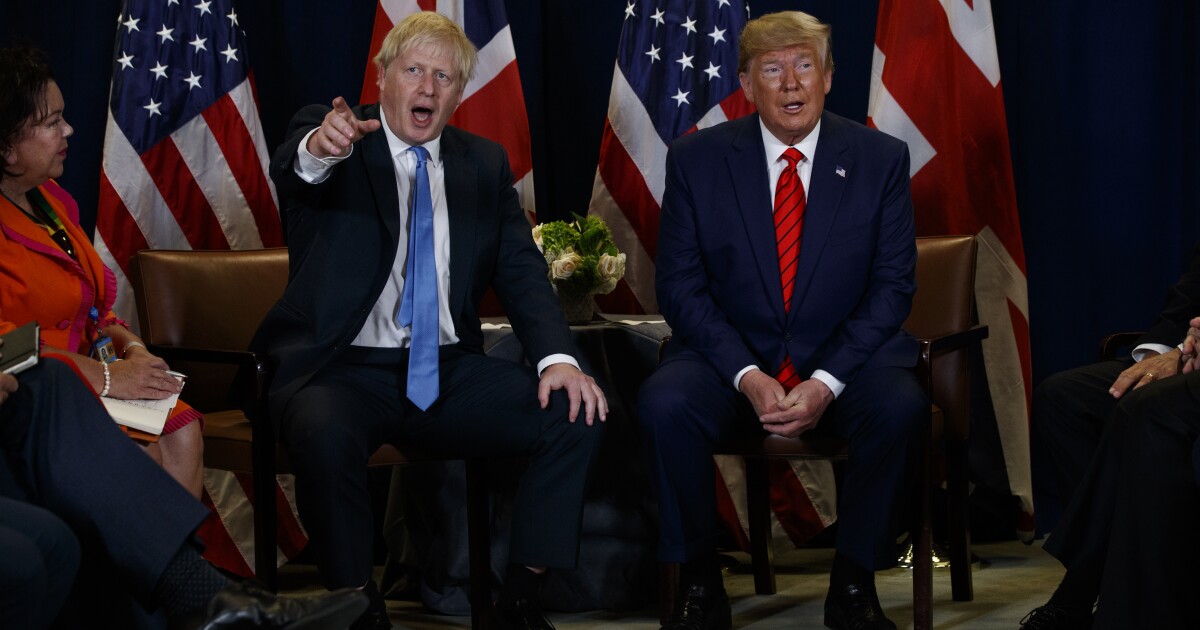 As Britain heads into the homestretch of its election campaign, the arrival of President Trump for this week’s NATO summit adds a volatile new element to a bitterly divisive contest.

For years, Trump has publicly praised Prime Minister Boris Johnson, whose Conservative Party is hoping to win a parliamentary majority in Dec. 12 voting. And the president is an unabashed proponent of Brexit, the planned split with the European Union that Johnson has vowed to bring to fruition.

But the last thing Johnson wants during this visit is an open show of support from Trump.

Trump is an unpopular figure in Britain, and Johnson’s main opponent, Labor leader Jeremy Corbyn, has already made campaign hay out of fears that a post-Brexit Britain would be vulnerable to predatory trade practices by Trump’s Washington.

Johnson — no stickler for political norms himself — sounded almost nervous during a radio interview last week in which he declared that “what we don’t do traditionally, as loving allies and friends … is get involved in each other’s election campaigns.”

Some commentators suggested such tactful distancing might be too little, too late, because Trump has already so warmly embraced Johnson, whose disruptive style is likened to the U.S. president’s own. Brian Klaas, a political scientist at University College London, tweeted that Trump is a “toxic political force here.”

In Britain and elsewhere, Trump has ignored long-standing diplomatic practice that constrains the U.S. from jumping into allies’ domestic politics. On a visit to London in July of 2018, he humiliated then-Prime Minister Theresa May by praising her political rivals and asserting that she could have saved herself a lot of trouble by following his advice on how to negotiate Brexit.

“I actually told Theresa May how to do it, but she didn’t agree — she didn’t listen,” he told a British tabloid, which published the unflattering interview, together with audio clips, hours before a joint news conference with the prime minister. Asked about it, with May at his side, Trump said he had been misquoted.

Before the election campaign began last month, Trump had long cultivated a public bonhomie with Johnson, even hailing him as “Britain Trump.” In September, as the prime minister was suffering serial defeats in Parliament of his Brexit proposals, Trump told reporters at the Oval Office: “Boris is a friend of mine … and he knows how to win.”

Johnson did eventually secure lawmakers’ approval for an EU withdrawal accord that he hopes to speedily implement after the election.

Once the campaign got underway, Trump made things awkward for Johnson when he suggested that the prime minister make an electoral pact with the far-right Brexit party of Nigel Farage — which Corbyn, the Labor leader, promptly dubbed a “Trump alliance.” In the same interview, Trump also poured scorn on Corbyn, calling the Labor leader “so bad” and adding, “He’d take you into such bad places!”

A senior Trump administration official told reporters last week in a pre-trip briefing that the president was “absolutely cognizant” that opining about the campaign would not be helpful to his host. But if Trump goes off script, it would hardly be the first time.

During a visit like this one, any British leader is more or less obliged to emphasize historical ties to the United States, especially in the context of a security-oriented gathering like Wednesday’s North Atlantic Treaty Organization summit. But Johnson’s camp can use subtle diplomatic cues to dissociate himself, if only slightly, from Trump.

As host of the NATO gathering, the prime minister would normally have set a bilateral meeting with the visiting U.S. leader, but none had been announced by the time Trump left Washington on Monday for London. Still, the summit and related ceremonial events, including a reception Tuesday evening at Buckingham Palace, will probably yield some tete-a-tete images of Trump and Johnson — and Corbyn is ready to pounce.

The Labor leader last week claimed that a leaked government dossier on preliminary U.S.-British trade discussions pointed to post-Brexit peril for the National Health Service, Britain’s much-criticized but beloved universal healthcare system. At campaign events, Labor and other opposition parties have been raising the specter of U.S.-style healthcare costs for British consumers under Johnson and Brexit.

“We’ll never let Donald Trump get his hands on our National Health Service!” Corbyn has declared at one rally after another.

Johnson has insisted the health service will not be part of trade talks. But an analyst with the Nuffield Trust, a British think tank specializing in healthcare issues, told the BBC that while there did not appear to be an envisioned sale of assets like hospitals, the documents suggested efforts would be made to open a greater British market share for U.S. pharmaceutical companies.

Another potentially sensitive British domestic issue is last week’s stabbing attack in central London, in which two people were killed in addition to the assailant, who was shot dead by police. In the wake of high-profile terrorist attacks in Britain and elsewhere in Europe, Trump has often offered unsolicited commentary on security measures he says he would have taken, or has harshly criticized officials such as London’s Mayor Sadiq Khan.

After the London Bridge stabbings, Johnson blamed Labor for policies leading to the early release of the slain assailant, who had previously been jailed on terrorism-related charges. That drew an angry response from the family of one of the victims, who accused the prime minister of exploiting the tragedy for political gain.

But Corbyn too has unleashed some sharp language about the attack, blaming successive British governments’ support for U.S. policy in Afghanistan and the Middle East.

Some commentators saw echoes of Trump’s polarizing style in the discord. During the London Bridge attack, passersby, including an immigrant worker from Poland, joined in spontaneously battling the assailant, who was wearing a fake suicide vest. So the attack was seen in many quarters as an inspiring show of courage and solidarity in the face of tragedy — before the political bickering began.

Lawmaker Chuka Umunna, who is running for Parliament with the opposition Liberal Democrats, wrote in an op-ed in the Independent newspaper that Johnson and Trump share an uncanny ability to divide their compatriots, rather than bring them together.

“They are two peas in a pod,” he wrote. “No wonder it appears as though Johnson is seeking to distance himself from his friend Trump.”