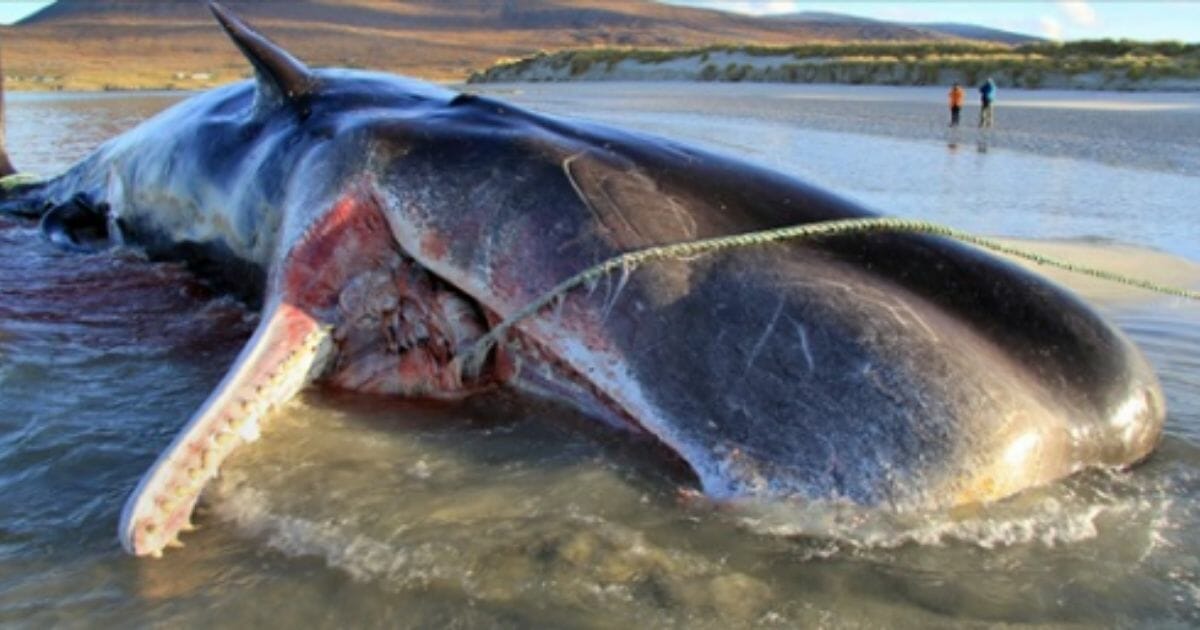 Those of us who live inland see plenty of anti-littering campaigns, and in some places there are signs that urge people not to dump anything down storm drains because they eventually lead to the sea.

People who live on or near the water see more of the effects of littering first-hand, and on Thanksgiving, a group in Luskentyre Beach, Scotland, was faced with a very large reminder of what can happen when we don’t clean up after ourselves.

A young male sperm whale weighing around 20 tons had beached itself and then died, leaving its huge carcass to be dealt with on Luskentyre Beach. The Scottish Marine Animal Strandings Scheme, who performed the necropsy, said that by the time it got there, the whale had already been dead for two days.

This led to the trapped gases in the whale causing a small explosion as it was cut open. The group was appalled by what they found in the whale’s stomach.

“In this whale’s stomach was approximately 100kg of marine debris- a whole range of plastic including sections of net, bundles of rope, plastic cups, bags, gloves, packing straps and tubing,” it shared in its post.

“All this material was in a huge ball in the stomach and some of it it looked like it had been there for some time,” the post continued. “The animal wasn’t in particularly poor condition, and whilst it is certainly plausible that this amount of debris was a factor in its live stranding, we actually couldn’t find evidence that this had impacted or obstructed the intestines.”

“This amount of plastic in the stomach is nonetheless horrific, must have compromised digestion, and serves to demonstrate, yet again, the hazards that marine litter and lost or discarded fishing gear can cause to marine life.”

“It is also perhaps a good example that this is a global issue caused by a whole host of human activities,” it added. “This whale had debris in its stomach which seemed to have originated from both the land and fishing sectors, and could have been swallowed at any point between Norway and the Azores. We are looking in more detail to see if we can work out quite why this animal ended up with so much of it in its stomach.”

Local Dan Parry told BBC that while he does his part to help keep the area clean, littering has become a major problem.

“We walk on these beaches nearly every day and I always take a bag to pick up litter, most of which is fishing-related,” Parry said. “This stuff could have easily been netting or the like lost in a storm, we just don’t know, but it does show the scale of the problem we have with marine pollution.”

After examining the contents of the whale’s stomach, there was still the matter of disposing of the large mass of rotting flesh. This has been a problem for as long as whales have beached near populated areas, and a variety of methods — some less effective than others — have been tried out over the years.

RELATED: 63-Year-Old Man Passes Away After Contracting Rare Disease When He Was Licked by His Dog

In 1970, one of those methods backfired memorably in Portland, Oregon. A half-ton of dynamite was used with the intent of turning a large, dead whale into a spray of small pieces that natural scavengers could then clean up.

Instead of disintegrating the mountain of blubber, large chunks of rotting whale rained down from the sky and rubber-neckers were covered in the “spray” and stench. The whale removal team ended up having to just bury the carcass on the beach, which is what they had hoped to avoid in the first place.

The SMASS, the Coastguard and employees from the Western Isles Council in Scotland skipped the explosives and — taking the ecosystem into account — decided to bury the dead sperm whale where it was.

The Luskentyre Beach is picturesque once again, but images from both incidents remain to remind everyone of the effect poor judgment and reckless littering can have on our planet’s inhabitants.