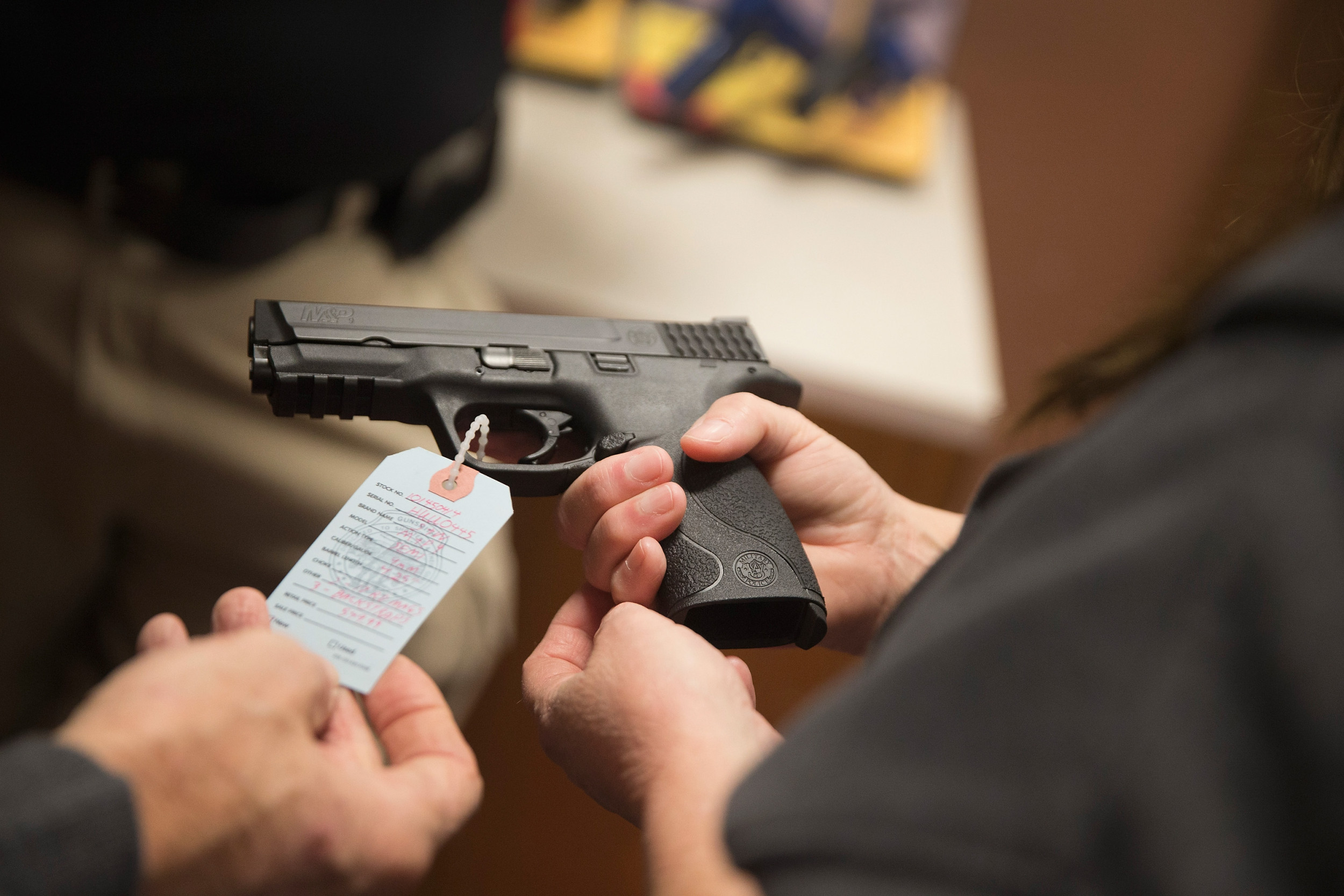 The Supreme Court on Monday is set to hear arguments in what may be the most significant gun case to grace the high court in over a decade. Depending on how the case proceeds, a unified conservative majority may elect to advance gun rights far beyond the reaches of current law.

The question at hand—whether and how far the right to bear arms extends outside one’s home and into the public square—could lay the groundwork for the most consequential Second Amendment ruling since the 2008 Heller decision. Then-Justice Antonin Scalia authored the court’s groundbreaking opinion in that case, rooting an individual’s right to bear arms for homebound self-defense and defense of one’s family in the Second Amendment for the first time.

Monday’s oral arguments are a culmination of years of litigation made possible by a framework established by Scalia in 2008, which carved out constitutional protections for firearms uses that abide “traditionally lawful purposes.” Over the ensuing years, a frenzy of legal spelunkers sought to explore just how cavernous the scope of Heller‘s protection was. In 2013, New York City’s gun laws served as a springboard for one such piece of litigation; that case, now presented to the justices, will determine whether the court is ready to lurch gun rights forward once more.

The New York State Rifle and Pistol Association, along with Romolo Colantone, Efrain Alvarez and Jose Anthony Irizarry—three New York City residents—had filed suit against the city to challenge its licensing scheme, one of the most restrictive in the country.

New York City requires would-be gun owners to obtain what’s known as a premises license in order to lawfully possess firearms at home. Until recently, guns purchased through a premises license could only be removed from the home, unloaded and in a locked case, in order to be transported for target practice to an approved shooting range. Other specified reasons for transportation had to receive preclearance from the city. New York City has only seven public authorized ranges, and gun owners could not transport their weapons to a second home or range outside city boundaries.

“While this case is about an unusual and limited local rule, it provides an opportunity for the Supreme Court to reaffirm that the Second Amendment leaves ample room for the kinds of reasonable gun safety laws that save lives and that Americans overwhelmingly support,” Eric Tirschwell, litigation director of the gun-control group Everytown for Gun Safety, said in a press release in January.

Yet one measure stood out among the unusually productive legislative session: a law affirming the privileges of gun owners in the state. Not to be outdone, New York City enacted its own rules in July expanding Second Amendment rights.

The Supreme Court had just months earlier decided to hear the pistol association’s appeal, and the city and state were working overtime to make the case disappear. The logic went as follows: if New York could abolish restrictions that formed the basis for the plaintiffs’ objections, then there would be no further controversy for the court to rule on.

New York State residents are now generally permitted under the new rules to bring their firearms from any place where they have a license to any other place within the state where they are licensed to possess. New York City residents can transport their firearms to second homes or gun ranges outside city limits, as long as they have satisfied the licensing requirements of their destination’s regulators.

Before the changes, early signs on the merits of New York’s old gun laws (while they were still in effect) had appeared promising. In 2015, a U.S. district court judge ruled against the plaintiffs. A similar fate befell the case in 2018 after an appellate court ruled in the city’s favor.

New York was, until recently, somewhat confident in its position, having gamely survived these legal hurdles and scrutiny the judiciary had thus far been applying to its reasoning. But everything changed when the Supreme Court agreed to hear the case.

Even when Justice Antonin Scalia, who died in 2016, was realizing the long-constrained dreams of the national conservative movement, gun control still had a substantial and fighting chance. Scalia’s opinion enumerated a host of lawful restrictions on gun ownership, suggesting that the regime of gun control would not come crumbling down with his scholarship. In fact, the main sort of gun ownership the Heller opinion protected was a right to defend oneself and one’s family in the home.

But with the staunchly anti-regulatory Justice Neil Gorsuch now in Scalia’s seat, and the conservative Justice Brett Kavanaugh having replaced the more moderate Justice Anthony Kennedy, the sun may have set on such broad deference to gun restrictions.

The plaintiffs are arguing that the text of the Second Amendment—in its provision for keeping and bearing arms—does not square with a gun-ownership scheme that is confined to the home. In fact, the pistol association said in its brief, the word bear makes plain the notion that arms would be utilized “outside the home.”

Their brief argued that gun-ownership traditions in the United States made clear that the Second Amendment would protect “a right to carry a loaded firearm upon one’s person should the need for self-defense arise.” In rattling off restrictions the plaintiffs find burdensome, the brief notes that residents are prohibited under a premises license from carrying weapons outside the home “either openly or concealed.” This hints at the kind of expansive ruling that stakeholders may be holding out for: a broad expansion of concealed-carry and, possibly, open-carry rules.

The severe limitations on training and marksmanship—New York City residents previously had effective access to just seven ranges—were a major point of contention in the case. The pistol association contended that reliable defense of the home, as was deemed protected in 2008, requires regular access to gun ranges for practice. It would then stand to reason, the group argued, that unfettered access to training grounds would itself be an indispensable component of the Second Amendment, one that cannot be limited so substantially as New York had done.

The city, for its part, defended the restrictions as part of a rich history of gun control that predates the U.S. Constitution. The city noted a 1763 municipal rule which forbade the discharge of firearms “in any street, lane or alley… or in any place where persons frequent to walk.” This groundwork signaled the city’s attempt to obey the text, history and tradition framework enabled by Heller.

In terms of public carry, New York objected to the notion that the pistol association would raise that argument in the first place. There is another license governing concealed carry that is available, albeit under more stringent conditions, to gun owners who wish to carry outside the home. Because this case involves a challenge to the restrictions of the premises license, the city argued, the public carry issue should not be considered by the court.

But the effective repeal of the former gun restrictions at the heart of the case serves as the most notable example of New York’s desperation to quash the issue. In issuing its brief, the city offered arguments reluctantly, only after noting that the justices should, first and foremost, toss the case out because of its practical irrelevance.

The Supreme Court, as with all courts, is confined to considering cases that represent actual disputes rather than issuing theoretical, advisory opinions. In determining what is known as mootness, the justices consider whether there are any ongoing harms being perpetrated, or whether the case is purely academic.

Perhaps most importantly, the group argued that New York’s changes represented a major exception to the mootness principle: the voluntary cessation of unlawful conduct. According to this concept, if a defendant suddenly stops committing unlawful behavior for no other reason than to moot the case, that should not force the litigation to be tossed out; otherwise, the system would be prone to abuse.

But the sorts of changes embraced by New York are not emblematic of “voluntary” behavior. Drafting laws and passing them through the state legislature in order to obtain the signature of the governor is not a process that can be easily reversed. Moreover, the rule-making process the New York Police Department engaged in to revise the city’s rules do not represent arbitrary behavior, but rather reflect a more deliberative process as well.

The National Rifle Association, which endorsed the New York pistol association’s case at the Supreme Court with a supportive legal brief, disagreed, claiming that the state’s conduct was anything but reasoned.

“The Supreme Court saw through New York City’s blatant attempt to evade judicial review in this important case,” NRA-ILA executive director Jason Ouimet said in a press release after New York unsuccessfully tried to invoke mootness. “This case presents a national opportunity to confirm a simple truth that New York City politicians refuse to accept: Our Second Amendment right to keep and bear arms is fundamental, and it doesn’t vanish when we exit our homes.”

This issue could serve as an easy exit for the justices, should they so desire to avoid a forthcoming ruling on an inevitable gun-rights question. Other elements of the case, such as a Commerce Clause challenge, could offer the Supreme Court an additional backdoor to escape from should they want to resolve the issue without touching hot-button Second Amendment disputes.

The fact that the justices did not already declare the case moot when granted the opportunity to do so suggests that they may be eager to let the Second Amendment take center stage once more at the Supreme Court.