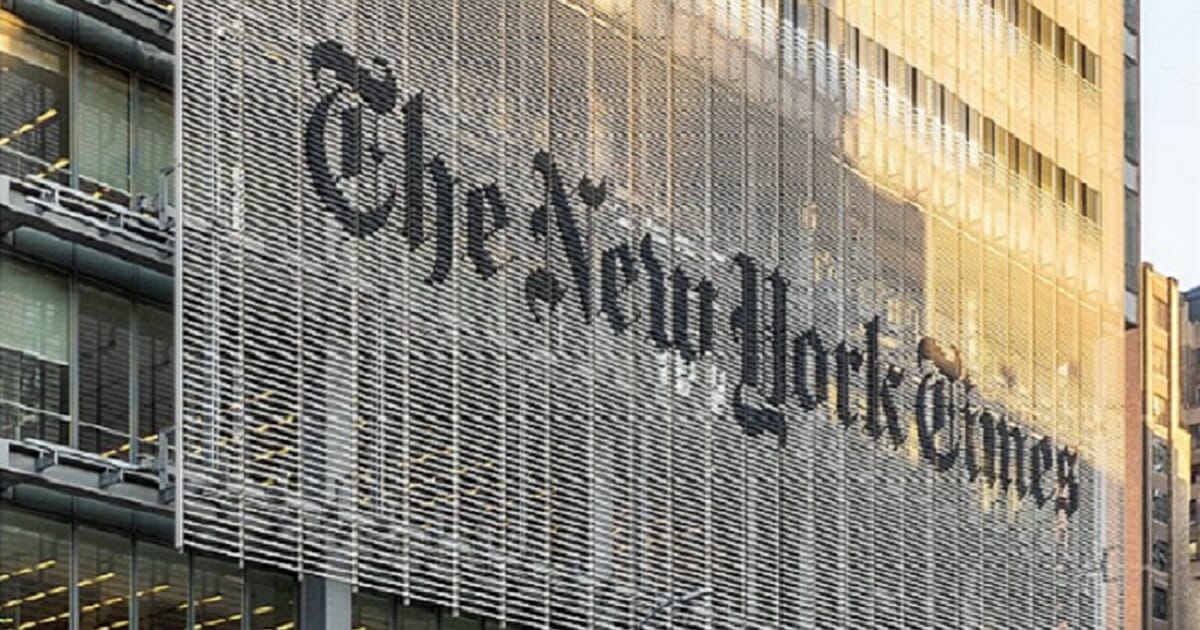 There are plenty of critics of The New York Times’ “1619 Project,” which you can probably guess just from its mission statement.

The project, according to its website, “aims to reframe the country’s history, understanding 1619 as our true founding, and placing the consequences of slavery and the contributions of black Americans at the very center of the story we tell ourselves about who we are.”

The project is now entering some public schools as part of the curriculum, something which has again reignited controversy.

However, this isn’t just coming from what liberals might think of as malcontent conservative parents who don’t understand the Very Good Thing that the “1619 Project” is looking to accomplish. Instead, it’s coming from an eminent academic in an interview with the World Socialist Website.

In the popular mind, Gordon Wood’s biggest moment might have been from the bar scene in “Good Will Hunting” where Matt Damon’s eponymous character makes a reference to him. He’s an American historian best known for his work on early American history, in particular the American Revolution.

Yet, in an interview with the World Socialist Web Site published Thursday, Wood says that despite the fact he’s considered one of the foremost historians on the American Revolution — a war which, interviewer Tom Mackaman notes, “the ‘1619 Project’ trains much of its fire on” — he wasn’t consulted about the project.

“Yes, no one ever approached me. None of the leading scholars of the whole period from the Revolution to the Civil War, as far I know, have been consulted,” he said.

Yes, Wood isn’t alone. Another World Socialist Web Site interview with prominent Civil War historian Jim McPherson earlier in the month found McPherson voicing similar concerns regarding The Times’ reticence in contacting top historians in the field when it came to the “1619 Project.”

Both took issue with many of the project’s findings, as well.

Do you think the “1619 Project” is historically inaccurate?

“I read the first essay by Nikole Hannah-Jones, which alleges that the Revolution occurred primarily because of the Americans’ desire to save their slaves,” Wood said.

“She claims the British were on the warpath against the slave trade and slavery and that rebellion was the only hope for American slavery. This made the American Revolution out to be like the Civil War, where the South seceded to save and protect slavery, and that the Americans 70 years earlier revolted to protect their institution of slavery. I just couldn’t believe this.”

“One of the things that I have emphasized in my writing is how many Southerners and Northerners in 1776 thought slavery was on its last legs and that it would naturally die away,” he said. “You can find quotation after quotation from people seriously thinking that slavery was going to wither away in several decades. Now we know they couldn’t have been more wrong. But they lived with illusions and were so wrong about so many things.”

And then there was the fact that the “1619 Project” is being used in public schools as part of the curriculum.

“I was surprised, as many other people were, by the scope of this thing, especially since it’s going to become the basis for high school education and has the authority of The New York Times behind it, and yet it is so wrong in so many ways,” Wood said.

And, yes, it’s potentially coming to a high school near you. In Chicago, it’s already going to be part of the curriculum, according to National Review.

“Thanks to our partners at the Pulitzer Center, every CPS high school will receive 200–400 copies of the New York Times’ The 1619 Project this week as a resource to help reframe the institution of slavery, and how we’re still influenced by it today — from the workforce management system created to harness enslaved labor and the incredible wealth that came from its unsparing efficiency to the music that you may very well be listening to now,” Chicago Public Schools CEO Janice Jackson said when she made the announcement back in September.

The Daily Caller reported the lesson plans are also being made available to other schools that want them.

In McPherson’s Nov. 14 interview, he also took aim at the veracity of the project.

“Because this is a subject I’ve long been interested in I sat down and started to read some of the essays,” he told the site.

“I’d say that, almost from the outset, I was disturbed by what seemed like a very unbalanced, one-sided account, which lacked context and perspective on the complexity of slavery, which was clearly, obviously, not an exclusively American institution, but existed throughout history.

“So I read a few of the essays and skimmed the rest, but didn’t pursue much more about it because it seemed to me that I wasn’t learning very much new. And I was a little bit unhappy with the idea that people who did not have a good knowledge of the subject would be influenced by this and would then have a biased or narrow view.”

Oh, well, he skimmed some of them. Ida Bae Wells, a New York Times reporter who was involved with the “1619 Project,” said that meant their objections could be prima facie discounted.

I find it, let’s say relevatory, that people keep posting the same interview with a single historian to refute the 1619 Project when said historian acknowledges he mostly skimmed it and did not bother to fully engage its text. Tell me, where else would such a lack of rigor stand?

As a black woman, I literally cannot *imagine* sitting down for a recorded interview on a major work that I haven’t bothered to read thoroughly. I wld have either declined the interview or read the project & gathered detailed thoughts about it. That he did not speaks for itself.

This doesn’t actually speak to the substance of the complaints, mind you, just that the historians didn’t read the whole thing. Both of these individuals have won Pulitzers for their work in their particular fields. Both of them read significant portions of the articles and found serious issues in how history was being sacrificed in the name of ideology. That they skimmed the rest of it doesn’t erase those very salient issues.

Perhaps McPherson summed it up best when asked about a quote Mackaman said he thought was the “thesis” of the “1619 Project.” In her introductory essay, Nikole Hannah-Jones — head of the project — wrote that “anti-black racism runs in the very DNA of this country.”

“Yes, I saw that too. It does not make very much sense to me. I suppose she’s using DNA metaphorically,” McPherson said. “She argues that racism is the central theme of American history. It is certainly part of the history. But again, I think it lacks context, lacks perspective on the entire course of slavery and how slavery began and how slavery in the United States was hardly unique. And racial convictions, or ‘anti-other’ convictions, have been central to many societies.

It’s often stated Napoleon Bonaparte said that “What is history, but a fable agreed upon?” There’s irony in the fact that he probably never said it, but the basic construction appeals to people and institutions who believe facts are clay and activists — not just historians — ought to be the potters.

In this case, the pottery is the fashionable idea that everything regarding American history can be seen not just through the lens of race but that of racism.

Wood and McPherson, Pulitzer winners both, are discounted because they didn’t sit down and read every page of the project.

Ida Bae Wells certainly wouldn’t have done that, at least as a (clears throat) black woman. (Wood and McPherson are both white men on the older side of life; that whole part of her tweet wasn’t subtext so much as text.)

The old facts don’t fit the new ideas, so which get discarded or elided over? The answer should rightly scare you — particularly when these new ideas might be headed to a school near you.