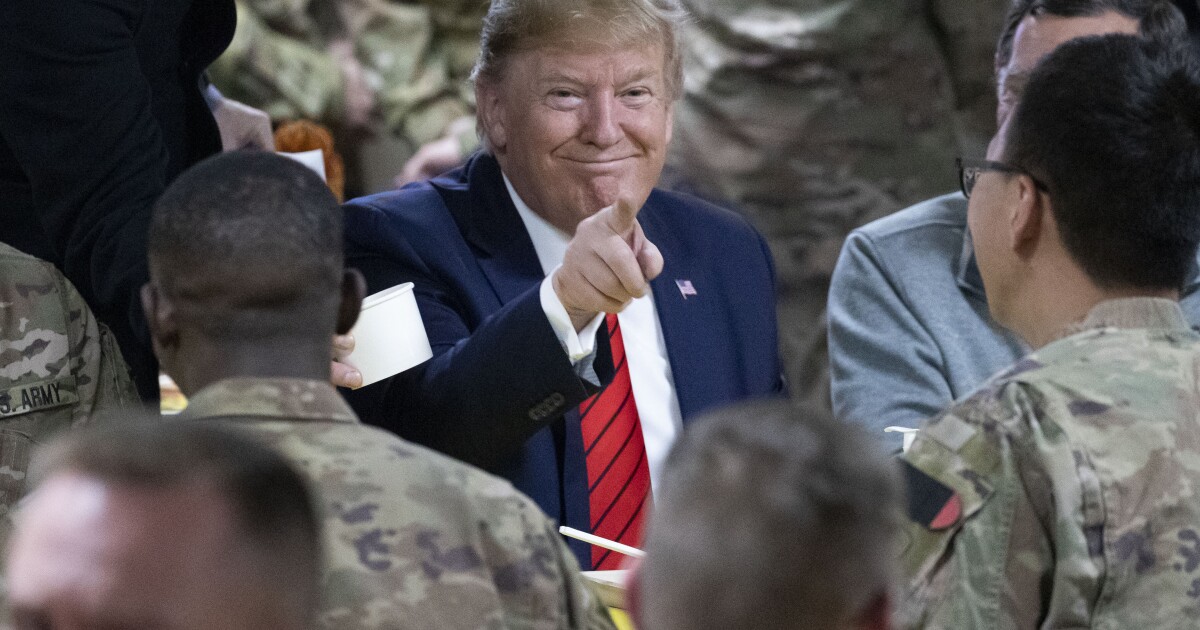 Flying in the Face of Impeachment

As President Trump faces the prospect of becoming the third president to be impeached, he’s taken to Air Force One for an escape, of sorts. Last week, it was an unannounced 2½-hour Thanksgiving visit to the troops at Bagram Airfield in Afghanistan.

Today, Trump is heading to London for a two-day summit with leaders of the North Atlantic Treaty Organization, the 29-nation military alliance that has been one of his most frequent targets. The summit has a fairly limited agenda in part because allies are eager to avoid embarrassing conflicts.

Privately, Western leaders are concerned not only with Trump’s actions in Ukraine, the subject of the impeachment inquiry, but also with the larger question of whether he will further weaken the alliance created after World War II to counter the Soviet Union.

Trump is scheduled to return Wednesday night, hours after the Democratic-led House Judiciary Committee holds its first public hearing, in the next phase of the impeachment inquiry: weighing potential articles of impeachment. Trump’s legal team has declined to attend the first hearing, claiming a lack of “fundamental fairness.”

The Union Versus the Governor

The State Building and Construction Trades Council of California, which represents plumbers, electricians, ironworkers and other construction workers, has a beef with Gov. Gavin Newsom. The 450,000-member union is a major Democratic donor and one of the most influential players on housing issues in the state, but it’s less than pleased with Newsom’s stance on the bullet train and other major public works.

More Power to the State?

Fires. Blackouts. Bankruptcies. Is it time for a state power company in California? Loretta M. Lynch, former president of the California Public Utilities Commission, is calling for a public takeover of Pacific Gas & Electric and possibly other private utilities with the idea to create such an entity. That goes a step beyond what many public officials, including Newsom, have been willing to publicly consider. But could that idea grow in power?

Gridlock on the 405 Freeway, especially around Thanksgiving, has become one of the more enduring images of L.A. Now, the Metropolitan Transportation Authority is in the early stages of planning to charge tolls for use of the carpool lane along a key section of the freeway: the Sepulveda Pass, running between the Westside and San Fernando Valley. If approved, the toll lanes would open in 2027, just before L.A. hosts the 2028 Summer Olympics.

OUR MUST-READS FROM THE WEEKEND

— The University of California, the state’s third-largest employer, spends some $523 million a year on outside contracts for an estimated 10,000 jobs normally represented by a union. Should a public institution be held to stricter standards than for-profit companies?

— The incredible story of Esther Takei, a 19-year-old Japanese American student who was selected as a test case for the resettlement of all detainees of Japanese descent in the U.S. in 1944.

— On Lake Titicaca in Peru, villagers are trying to develop a sustainable tourism model that gives every household an opportunity to prosper and preserves tranquility.

— Intermittent fasting for weight loss: What you need to know.

On this date in 2015, a young married couple opened fire on a holiday party for San Bernardino County health workers, killing 14 people and injuring 24 in the deadliest terrorist attack in the United States since Sept. 11, 2001. Authorities said the wife had posted a note on Facebook pledging allegiance to Islamic State shortly after the shooting. Later that day, police would chase the couple in a vehicle and engage in a shootout that killed the two. Remember the victims at the Inland Regional Center with these profiles and see how The Times covered the news in this timeline.

— A rash of car burglaries has prompted calls for plugging a loophole in state law that allows some break-ins to go unpunished, but the Legislature has balked at prosecutors’ requests to make obtaining convictions easier.

— L.A. Mayor Eric Garcetti’s latest appointee to the Los Angeles Department of Water and Power’s board of commissioners is a top executive at a company that markets water and power and has a history of trying to make deals with government agencies in Southern California, including LADWP.

— For the second time in a week, authorities say paramedics responded after passengers aboard a Norwegian Cruise Line ship docked at the Port of Los Angeles had fallen ill.

— “A Beautiful Day in the Neighborhood” is a great movie, columnist Mary McNamara writes. But, she argues, it misses the point of Mister Rogers.

— Anthony Hopkins and Jonathan Pryce explained to us how they prepared for the “papal smackdown” of the film “The Two Popes.”

— Shelley Morrison, an actress with a 50-year career who was best known for playing a memorable maid on “Will and Grace,” has died at 83.

— Mexican security forces on Sunday killed seven more members of a presumed cartel assault force that rolled into a town near the Texas border a day earlier and staged an hourlong attack, officials said, bringing the death toll to at least 20.

— A tribe in Washington state wants to resume whale hunting. Should it revive this tradition?

— California’s electric vehicle sales are up. But will we reach the 5 million goal by 2030?

— Quarterback Jared Goff’s monster passing day propelled the Rams to a blowout win over the Arizona Cardinals, while a costly pass interference call gave the Chargers a gut-wrenching loss against the Denver Broncos.

— The Lakers’ 10-game winning streak crumbled in a mistake-filled loss to the Dallas Mavericks.

— At the end of Sunday, amid conflicting reports about his fate, Clay Helton remained USC’s head football coach … for now.

— How old is too old to be president? We are entering uncharted waters.

— L.A. County supervisors are trying to sneak a last-minute tax measure on the ballot. Yes, again.

— “It never goes away or stops, even when he’s not publicly attacking me”: Lisa Page, the former FBI lawyer and frequent Trump target, breaks her silence. (Daily Beast)

— In Malaysia, officials want to elevate the social status of durian with tastings and orchard tours, but focusing so intently on production of the pungent fruit has its costs. (South China Morning Post)

For screen legends such as Charlie Chaplin, Louis B. Mayer and Marilyn Monroe, the Avalon Theater on Catalina Island was a destination for premieres and showcases. For Catalina longtimers, the 1,184-seat Art Deco movie palace was the setting for first dates, high school graduations and nights out with the kids. But even on an island with not much to do, the theater says it isn’t getting enough customers, and it plans to stop showing first-run movies by the end of this year. But many residents aren’t ready to accept the end of a 90-year tradition.