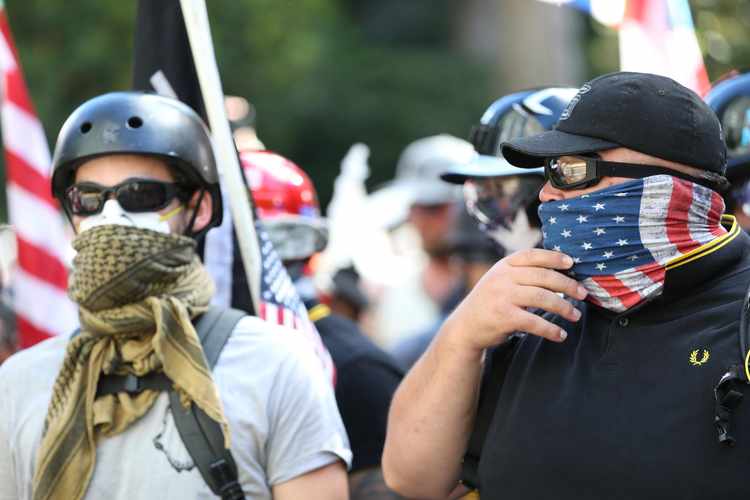 I’m sure the idea of Democratic hypocrisy did not originate with him, but Tucker Carlson expressed it perfectly this summer when the “nonviolent” left was threatening to stab Mitch McConnell in the heart because he didn’t support gun control:

“Almost everything the left says these days is projection. They accuse you of exactly what they’re doing.”

With that in mind, it is time to look at the latest leftist trope against conservatives and see just how it fits Democrats themselves. This time it is the virulent accusation that Trump supporters are members of a cult — all 63 million of us!

It’s hard to know who started it for sure, but over the last month, the “cult” meme has been repeated by no less than CNN’s Brian Stelter, Dan Rather, Anthony Scaramucci, and the Washington Post’s Dana Milbank. Possibly that’s because a former cult member cashed in with a book called “The Cult of Trump.” Steve Hassan, a onetime “Moonie” who escaped the Unification Church’s clutches in the 1970s, sees President Trump as typical of cult leaders, and shared his fears with Stelter on the latter’s comically named “Reliable Sources” show.

“We can start with the pathological lying, which is characteristic of destructive cult leaders,” Hassan told Stelter. “The blaming others and never taking responsibility for his own failures and faults. Shunning and kicking out anyone who raises questions or concerns about his own behavior.”

Oh, dear! Well, I suppose that might describe Donald Trump, or it might describe any politician. Does anyone see Nancy Pelosi taking responsibility for her own failures and faults? To me, this canard sounds like it applies to the entire slate of Democratic presidential candidates. I know they don’t think they are pathological liars, but isn’t that sort of the definition of pathological? They sure do make up a lot of stuff, including an economic system that is the political equivalent of a perpetual motion machine, endlessly buying votes with other people’s money. As for shunning, what do you call what they do to their own non-conforming candidates like Andrew Yang and Tulsi Gabbard. Russian assets, anyone?

I decided not to rely on the anti-Trump bias of Hassan, Rather and Milbank, but rather to go to a real expert on cults for the defining characteristics that would settle once and for all whether it is Trump’s red-hatted base or the politically correct Democrats in pink pussy hats who are being brainwashed.

Robert Jay Lifton, a psychiatrist who taught at Harvard Medical School, wrote a paper titled “Cult Formation” in the early 1980s where he spelled out three characteristics common to all destructive cults. As interpreted by deprogrammer and cult expert Rick Ross, Lifton’s work provides the base line for determining whether or not Trump’s supporters are members of a cult.

First up is the concept of a charismatic leader, but when it comes to politics the notion of charisma is not considered destructive but rather essential. No one has argued that John F. Kennedy was the leader of a cult, nor Franklin Roosevelt, nor Barack Obama, yet they were all possessed of undeniable charisma.

It is true that among Republican presidents for the last 100 years, the only one besides Ronald Reagan who can make a strong claim to being charismatic is Donald Trump, which may be why Democrats are so afraid of him, but if you are a Republican, don’t panic. You don’t have to start singing Hare Krishna yet.

That’s because Lifton included two other essential elements in his description of destructive cults, and for my money, they both apply to Democrats much more so than to Republicans. Those elements are “a process of coercive persuasion or thought reform [commonly called ‘brainwashing’]” and “economic, sexual, and other exploitation of group members by the leader and the ruling coterie.”

Can you think of any instance where President Trump has coerced his supporters into following some element of his platform? Rather, if you are being honest, it is the Trump troops who have had to coerce their leader into adopting the conservative positions he holds today. On everything from abortion to immigration to judges to gun control, it is the base that has demanded Trump earn their support by doing what they want (not what he or Ivanka or Jared might want).

Now consider the monolithic thinking promoted by the left. Is there any room for dissent or discussion within the Democratic Party about the value of preserving life within the womb? Not if you believe what Elizabeth Warren said in the last Democratic debate: “I believe that abortion rights are human rights. I believe that they are also economic rights. And protecting the right of a woman to be able to make decisions about her own body is fundamentally what we do and what we stand for as a Democratic Party.”

Throw in the lockstep positions on guaranteed health care, open borders, gun control, climate change, and LGBTQ rights, and you have the makings of a cult-like environment where nonconformity is not tolerated. Again, consider the case of presidential candidate Gabbard, who has been shunned by the Democratic establishment because of her refusal to toe the party line on endless overseas wars. Bad girl!

The Democrats even have a goon squad to shut down dissent — whether it is the loud, bullying tactics of the celebrity left or the fists and sticks of the masked Brown Shirts called Antifa. They will hurl invective, insults and bricks at anyone who questions leftist orthodoxy on climate change, sanctuary cities, or disarming America. There is nothing comparable working on behalf of Trump or the conservative cause, thank God.

The final leg of Lifton’s three-part definition of dangerous cults is “economic, sexual, and other exploitation of group members by the leader and the ruling coterie.” We don’t have to talk about Bill Clinton or Jeffrey Epstein here, although those are certainly disturbing instances of alleged sexual exploitation, but what I am thinking about with regards to the Democrats is their decades of economic exploitation of black communities for the benefit of “the ruling coterie.” Can anyone deny that urban America has suffered under Democratic leadership?

Murder rates are higher in black communities, graduation rates are lower, and until Trump came along, unemployment was through the roof. What about the opioid epidemic? Do the Democrats prefer to have a drugged population of compliant voters? If not, then why don’t they support the president’s efforts to take practical action to stop the flow of drugs across our southern border?

This just touches the surface of how the left tries to control thought and to wipe out nonconformity. The mechanisms of digital technology are being harnessed in ways even George Orwell never envisioned. Moreover, it is the left that has a virtual monopoly these days on “end of the world” scenarios such as the “12 years to climate doom” hoax.

Democrat voters have been convinced that the president of the United States is working with Russians to undermine our democracy. Meanwhile, Democrat politicians have been working with Big Tech to (guess what?) undermine our democracy. That should tell you everything you need to know about who are the cult leaders and who are the cult followers, and neither one is named Donald Trump.

Yes, Trump has demonstrated the power to persuade voters to rethink their entire political philosophy, using harsh truth and direct talk to convince Americans to take an honest look at what their “dear leaders” have been telling them for years. That’s why Democrats are so frightened. In 2016, Trump peeled away mostly white blue-collar voters from the Democratic Party and thus secured his victory. If the polls are correct, and blacks and Latinos are now trending toward Trump, then it’s game over for the Democrats’ ability to exercise near total control over those communities.

Frank Miele, the retired editor of the Daily Inter Lake in Kalispell Mont., is a columnist for RealClearPolitics. His books — including “The Media Matrix: What If Everything You Know Is Fake?” — are available at his Amazon storefront. Visit him at HeartlandDiaryUSA.com to read his daily commentary or follow him on Facebook @HeartlandDiaryUSA or on Twitter @HeartlandDiary.