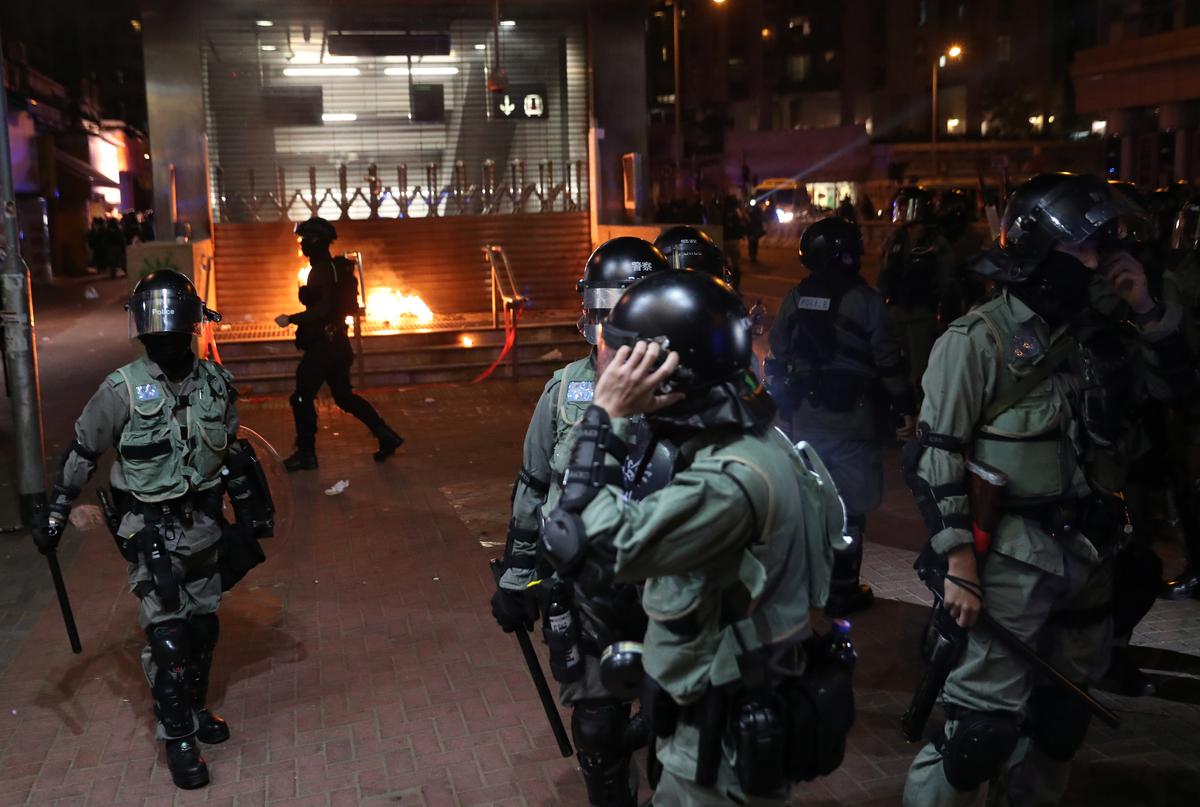 HONG KONG (Reuters) – Hong Kong protesters geared up for a week of lunchtime rallies on Monday, a day after a mass demonstration showed the anti-government movement can still draw people to the streets even after sweeping recent gains by democrats in district elections.

Police clear an area after protesters threw Molotov cocktails at an MTR station in Hung Hom after a day of protests in Hong Kong, China December 1, 2019. REUTERS/Leah Millis

After a rare lull in demonstrations following the polls, police on Sunday fired tear gas to disperse thousands of anti-government protesters as residents chanted “revolution of our time” and “liberate Hong Kong”.

Protesters are planning two-hour rallies at lunchtime for the next five days in the Asian financial hub’s central business district, according to online posts.

The protests have drawn in a wide swathe of Hong Kong society – from students to pensioners and office workers. The lunchtime rallies in Central were aimed at drawing in white-collar professionals, who occasionally have blocked roads over the past few weeks, leading to some face-offs with police.

The Sunday protest in the busy shopping district of Tsim Sha Tsui followed a “thanksgiving” march by hundreds to the U.S. consulate to show gratitude for U.S. support for the demonstrations that have agitated the Chinese-ruled city for about six months.

Shops and businesses in Tsim Sha Tsui closed early as police sprayed volleys of tear gas at demonstrators, including some elderly residents and others with their pets, as they marched past the city’s Kowloon waterfront, home to luxury hotels and shopping malls.

Police made several arrests as the tear gas sent hundreds fleeing towards the harbour.

While the Nov. 24 district elections delivered an overwhelming victory to pro-democracy candidates, activists have pledged to maintain the momentum of the anti-government movement.

The protesters’ demands include an end to Beijing’s alleged meddling in the freedoms promised to the former British colony when it returned to Chinese rule in 1997, universal suffrage and an inquiry into police use of force.

The unrest since June has at times forced the closure of government offices, businesses, schools and the international airport, helping drive the city into recession for the first time in a decade in the third quarter.