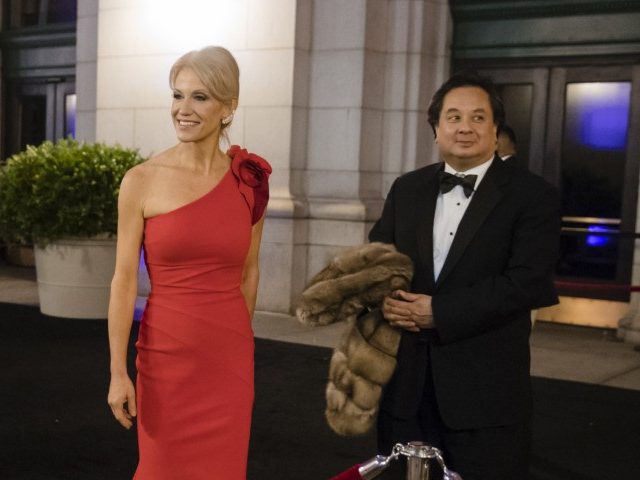 Attorney George Conway on Monday took what appears to be his first public jab at his wife Kellyanne Conway, and senior White House aide , addressing her verified Twitter account with a snarky attack on her “boss” President Donald Trump.

The tweet was prompted by Kellyanne commenting on a resurfaced video of former Vice President Joe Biden boasting at a 2017 event about allowing children to play with his “wet leg hair” and sit in his lap while he was a lifeguard.

“We need Ukraine’s help to defeat THIS guy?” she added, referring to House Democrats’ claims that President Trump asked the leader of Ukraine to probe allegations of corruption against Biden and his son, Hunter Biden, to damage his candidacy.

We need Ukraine’s help to defeat THIS guy? https://t.co/QsCwihXAB6

Shortly after, George Conway responded to his wife: “Your boss apparently thought so.”

Your boss apparently thought so. https://t.co/yje099pkPU

Conway’s knock on his wife comes as House Intelligence Committee members are set to receive a report on the ongoing impeachment inquiry against President Trump from panel chair Rep. Adam Schiff (D-CA). The probe into whether to remove the president was prompted in September, after a partisan CIA analyst’s “whistleblower” complaint, comprised of second-hand information, alleged that President Trump pressured Ukrainian President Volodymyr Zelensky in a July 25 call to probe the Biden family in exchange for the released of U.S. military aid to the European country. Both world leaders have denied the allegations.

“I never talked to the president from the position of a quid pro quo. That’s not my thing,” Zelensky told TIME magazine in an interview published Monday.

Conway, a frequent critic of the president, has expressed support for removing the president over the call, branding the transcript of the conversation “quite damning.”