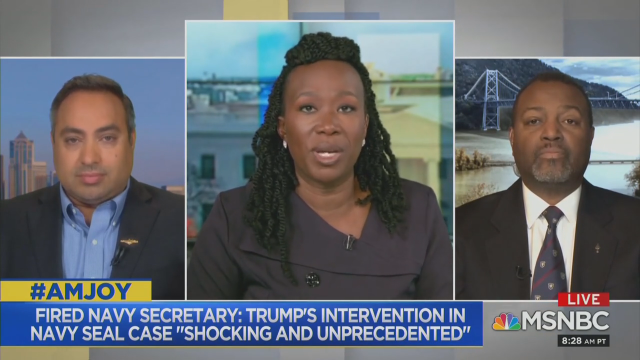 On Joy Reid’s MSNBC show today, MSNBC contributor Malcolm Nance went on a rant about Trump’s pardoning of Navy Seal Eddie Gallagher and other members of the military.

Among other things, speaking of the Telly Savalas character in The Dirty Dozen—a murderer and rapist—Nance said:

“It’s almost as if Donald Trump thought, ‘hey, that’s my favorite character!’ He has a mindset of where he thinks his personal toughness is men doing horrible things.”

Bonus coverage: you’ll find a real Reid blooper at the end of the clip. In a discussion of fired Navy Sec Richard Spencer, Reid depicted him with a photo of . . . Richard Spencer the white supremacist. She had to apologize at end of segment. Guess when you see racism and racists everywhere, it was a predictable mistake.

JOY REID: What are the implications of Donald Trump excusing, then elevating, and now apparently planning to campaign with, this person [Eddie Gallagher] who he’s allowing to also keep his Navy Seal pin?

MALCOLM NANCE: Well the implications are dire for the armed forces . . . Donald Trump has decided, he likes war criminals . . . Donald Trump wants this type of person around him. He thinks he’s mafia boss. He’s the head of a criminal clan, and he thinks having these brutal foot soldiers around him is macho. It’s nothing. It’s dishonorable and cowardice

This is him, posing for his tribe, using men of honor, people serving in the military, to make it look like he’s a tough guy. But he wants to be: I’m going to give everyone homework tonight. Go watch the movie The Dirty Dozen from the mid-60s, right? Lee Marvin. It’s 12 people who are all going into war, into a special mission where they’re going to die, because they’re in prison and this is their only chance.

The one character who is truly crazy-insane, is Terry Savalas, who actually on the mission rapes and murders a woman. And it’s almost as if Donald Trump thought, “hey, that’s my favorite character!” He has a mindset of where he thinks his personal toughness is men doing horrible things.

>> Help us fight back against the media’s impeachment crusade. <<