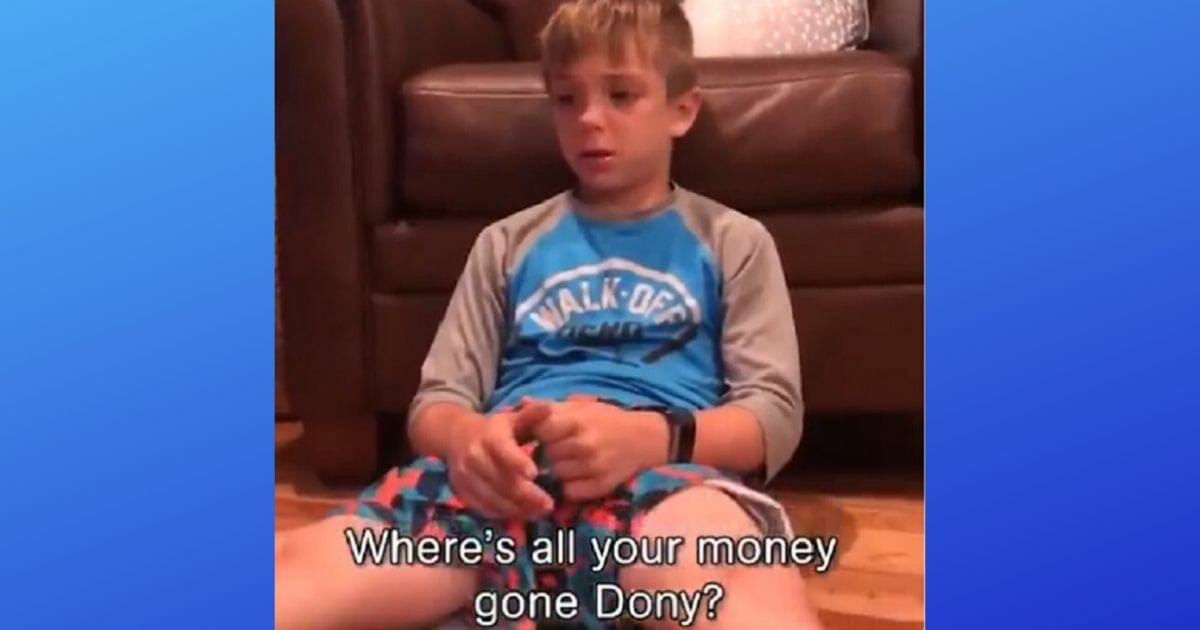 Young Dony is all of us.

You may not know who Dony is. Given how fleeting viral fame is, you may have forgotten. Given how his classmates will probably find this video in a few years, he probably hopes you have.

However, we’d like to consider Dony one of the youngest official Republicans there is. And no, I’m not counting that conservative couple you know who have a kid and swears at the christening that the young one will be a dyed-in-the-wool GOPer for life.

A crisp Benjamin says that in 18 years, that kid’ll be at Oberlin, finding Vox too conservative, listening to whatever Pitchfork spits out, and vigorously protesting the fact that the desiccated College Republicans group was able to scrape up enough money to get a stooped-over Michael Knowles to speak. It’s almost like the circle of life.

Instead, I’m basing Dony’s conservatism on the fact that he has an allergic reaction to the luxury tax that bankrupted him in a game of Monopoly.

If you haven’t seen the video, it first made the rounds this summer after being spotted on Reddit.

User Rob Diaz posted this sad video of poor, poor Dony finding out the sad realities of life as his top hat stood broke on Ventnor Avenue, a thoroughly defeated piece of haberdashery, a tattered mess of felt utterly crushed by an unfeeling government. (Note: I have no inside information that this is actually where Dony ended up on the board, nor can one tell from the video, but this is how I’m imagining it and don’t spoil my dreams.):

Where did all my money go?? via Reddit pic.twitter.com/cBl1cYwWRD

Look at that poor kid and his sudden realization.

“Where’s all your money gone, Dony?” a woman’s voice asks.

“Taxes,” the boy says through sobs.

No, it’s not, Dony. And while you may have gotten your viral fame in the summer, your sad visage and youthful disillusionment are even more important this December.

In a few weeks, young man, you’ll be opening your presents. Your par– erm, Santa will have paid taxes on them, but you yourself won’t feel too much of the burden. Sure, it’ll be passed onto you in some ways — Ol’ Saint Nick is probably going to wonder if you really need “Madden NFL 20” when last year’s edition looks so similar on the back of the box and is $30 less — but you probably won’t feel it.

Do you think this kid will end up a Republican for life?

A few weeks later, Dony, a bunch of people are going to be trying to get people to caucus for them in the state of Iowa. I’m not going to explain the caucus system to you yet because, well, your folks probably don’t understand it, either.

The point is, they’re going to have all these people on the ground trying to get Democrats in Iowa to support them. And what they’re all going to say is that they’re going to give you stuff. It’ll be like passing “Go” and collecting $200 every time you roll the dice.

What they’ll do, they say, is just take some of the money from these Monopoly players who are so good at the game that they have hotels at all the best properties and tons of money in the bank. We’re not just talking Oriental Avenue here, Dony. We’re talking at least North Carolina Avenue, if not Boardwalk.

Some of them think they can take tons of it without having any real effect and pay for a lot. Others say this is unrealistic and only want to take a little piece of the pie from these high-rollers to finance more modest ideas. But the point is, they’ll claim, you’ll be the one who benefits. You won’t have to pay a pink banknote printed on cheap paper more for any of this stuff.

What’s going to happen if any one of these people gets elected, unfortunately, is that this video of you is going to be what you feel like every April 15 of your adulthood. And when you have any sort of capital gains to report. And when you’re dealing with an estate tax. You’re a bit young to know what all of that is. But trust me, you will.

And here’s the thing: Everyone else knows it, too. Your video kind of touched a nerve, young man. And there’s a reason for that.

Take this headline from WKXW-FM in my tax-happy home state of New Jersey: “Kid losing Monopoly experiences what it’s like to live in NJ.”

Or this one from PopSugar: “A Kid Just Learned That Taxes Suck Through a Game of Monopoly, and I Feel Your Pain, Bud.”

I hope what happens in Iowa and beyond doesn’t affect you too much, Dony. However, whatever happens, when you get a little older give us a shout at the Western Journal.

We can get you started on some Milton Friedman. Call it a hunch, but we get the feeling you’re going to like him.