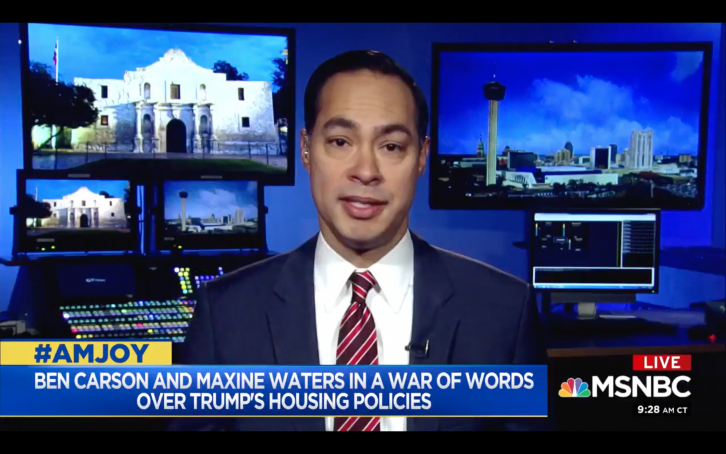 “I think, for whatever reason, on the other side of the aisle, on the Republican side of the aisle, people get off on that,” Castro said. “Look at Trump at the debates in 2016. There’s a certain element within that base that seems to love it when people are cruel to one another. And I don’t know why that is.”

Castro told AM Joy host Joy Reid that he does not think everyone in the party falls into this camp, but a portion of the base does love it.

“But, clearly, Trump has built up his political record and reputation, and this administration has continued a record of cruelty toward migrants, toward people who are poor, and there’s a certain amount of that base that seems to love it,” he said.

“I don’t understand it, but I can say that we’re going to move in a completely different direction where we build an America that’s not based on cruelty. That’s based on compassion and common sense. That’s the kind of country that we need,” he added.

Castro has not yet qualified for the next Democratic debate to be held on Dec. 19. He has said that he is planning on staying in race to try to qualify before the Dec. 11 deadline.

Klobuchar stressed that Bloomberg should have to debate his fellow candidates in order to win the nomination. She also pushed back on criticism that the Democratic field of candidates is weak.

“I don’t buy this argument you get in because everyone else sucks. I just don’t,” she said.

“I think we have strong candidates. I don’t think any of the polling or the numbers show that people are dissatisfied with all their candidates,” she continued.

Bloomberg’s decision to self-finance his campaign means he will not be able to meet the donor threshold to participate in any of the Democratic debates.

MSNBC confused a former Navy secretary for a prominent white supremacist during Sunday’s broadcast of AM Joy.

Host Joy Reid was discussing former secretary of the Navy Richard V. Spencer’s op-ed in the Washington Post detailing his firing over a situation involving a Navy SEAL accused of war crimes. As Reid read an excerpt from Spencer’s op-ed, the broadcast showed a photo of Richard Spencer, a neo-Nazi and leader of the alt-right movement.

Reid later made an on-air correction for the mix-up.

Johnson: Warren, Buttigieg have issues with narratives surrounding their campaigns

Warren is struggling with voters who do not see her as totally honest, Johnson said.

“There was first her fiasco with claiming Indian heritage, then there was Medicare for All which she was widely criticized for. And she wouldn’t just tell people, ‘yes, your taxes are going to go up,'” Johnson said during an appearance on Fox News’s MediaBuzz.

Warren’s reputation as a candidate with solid plans has taken a hit, Johnson argued.

Johnson also said that while Buttigieg is conveying an image of being accessible to voters and the media, he is struggling with African-American voters.

Buttigieg’s campaign became embroiled in controversy when a writer for The Root ripped Buttigieg for being dishonest. Buttigieg addressed the situation by calling the writer and talking with him, which helped Buttigieg’s reputation for accessibility.

Johnson said that despite Buttigieg’s quick handling of the situation, his numbers with African-American voters will “probably not” improve because of it.