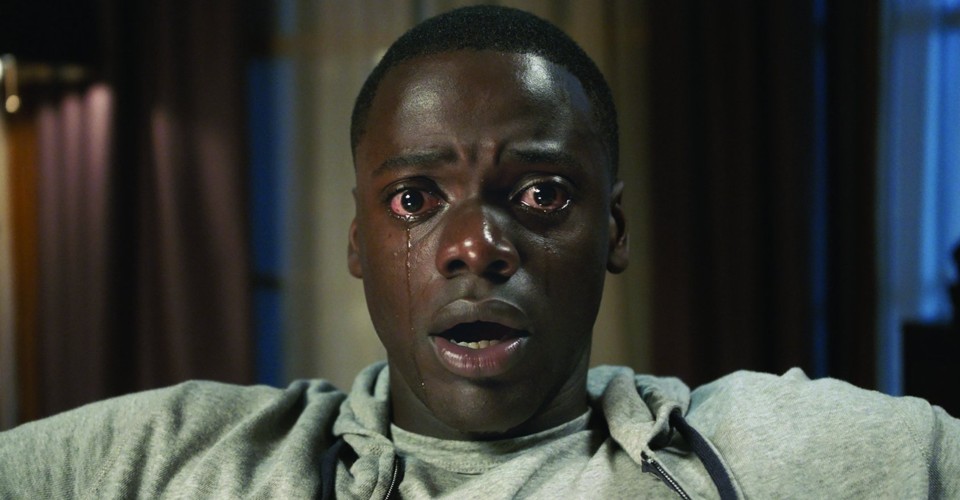 Like so many horror films, Get Out is exploring the creepy menace of the suburbs. Usually, similar slasher movies exist to puncture the false veneer of safety that comes with a white picket fence, but in Get Out, the threatening vibe is present from minute one. Chris (Daniel Kaluuya) is about to meet the parents of his girlfriend Rose (Allison Williams) for the first time and is nervous when he realizes she hasn’t told them that he’s black. After a long drive, their manse turns out to be exactly what you might imagine—giant, secluded, pristine, and filled with trinkets from trips around the world.

Rose’s father Dean (Bradley Whitford) is a little too eager to call Chris “my man,” her mother Missy (Catherine Keener) is icy and standoffish, and her brother Jeremy (Caleb Landry Jones) is weirdly aggressive, but there’s nothing that unusual going on at first. Peele layers in a familiar awkwardness before slowly introducing elements of dread. The house’s maid Georgina (Betty Gabriel) and the groundskeeper Walter (Marcus Henderson), both black, have strangely placid demeanors; Missy is a psychiatrist who keeps offering to hypnotize Chris (just to help him stop smoking, you understand); and, naturally, there’s a locked basement no one’s allowed to go into (just a nasty case of mold, of course).

It’s best to know as little as possible about Get Out’s second and third acts. Peele’s plotting is as crisp as his knack for visual storytelling, and he doles out tidbits of information with glee, letting the audience slowly figure out the particulars of Rose’s family while they guess at just how deep the malevolence goes. Chris is on edge from minute one, understandably; behind the family’s friendly surface is the kind of passive prejudice he obviously feared from the get-go. The delight comes in watching how Peele heightens that into real terror. Get Out is clearly playing on the discomfort a young African American man might have in visiting a largely white community—something rarely explored by the horror genre.

There are few more frightening monsters to conjure than racism, after all. It’s a topic the genre has brushed up against—with the black protagonist of Night of the Living Dead, a rare sight in 1968, or in Bernard Rose’s 1992 classic Candyman, in which the titular figure in part represented America’s history of slavery and repression. But racism is still a surprisingly uncommon subject matter, and Peele addresses a more insidious fear—of the fallacy of America being a post-racial society, and of the nightmares one can imagine under that benign surface.

Kaluuya, a British actor who was extraordinary in the Black Mirror episode “Fifteen Million Merits” and, more recently, played Emily Blunt’s stoic partner in Sicario, is terrific in the lead role. Williams excels as Rose, weaponizing the lack of self-awareness she deploys so well on HBO’s Girls. The entire cast is perfectly restrained, save for maybe Jones, who feels unhinged from the start, and the delightful Lil Rel Howery, who plays Chris’s friend Rod, a TSA agent with the kind of moxie and deductive powers one might not expect from an employee of that particular agency. He’s a vehicle for the film’s biggest laugh lines—but Get Out is funny throughout, wringing jokes from even the tensest moments.