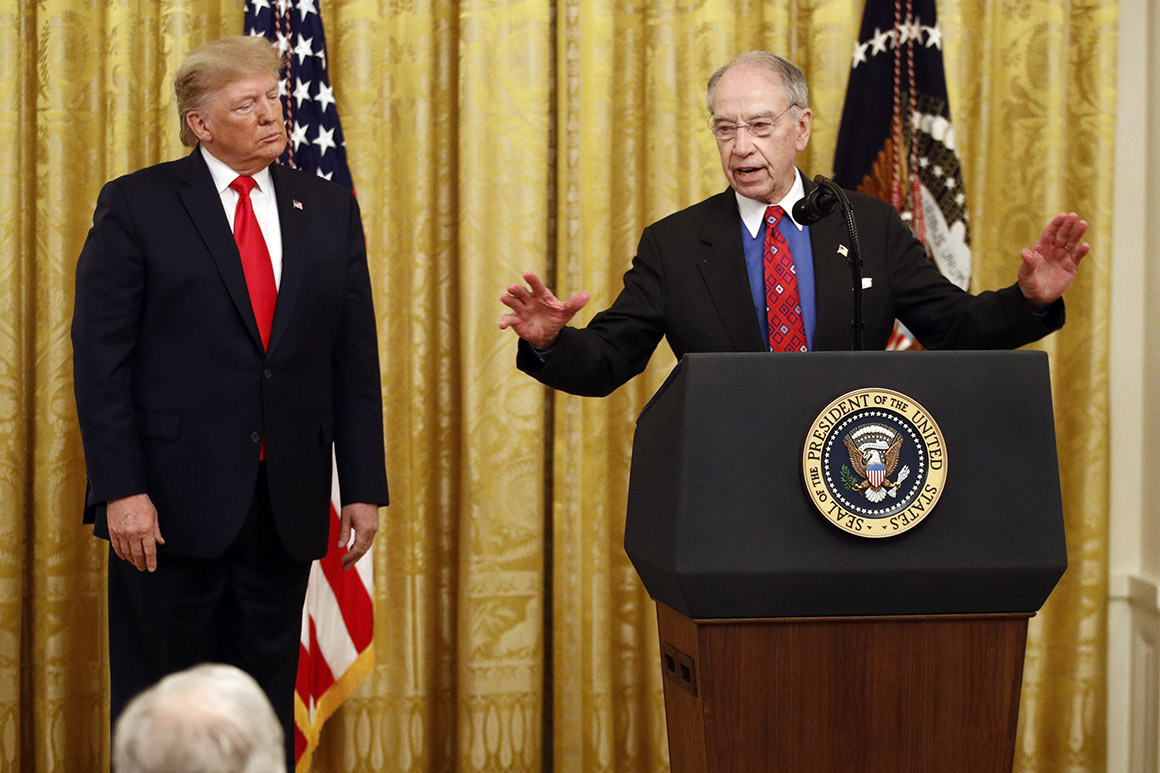 The standstill — even on an issue that has bipartisan backing and the support of a fickle president — reflects the unceasing gridlock of today’s Senate and how difficult it is to move any major legislation through the upper chamber.

With Democrats in control of the House, the GOP-controlled Senate has shifted virtually its entire focus to confirming Trump’s judicial nominees where bipartisan votes aren’t needed. And heading into an election year, McConnell is loath to bring up issues that divide his caucus or risk alienating powerful industry groups. Legislative activity will only decline further if and when the Senate holds an impeachment trial that will further polarize the Capitol.

“I’ve said to people here, if you’ve been here four years or less you’ve never seen the Senate,” said Senate Minority Whip Dick Durbin (D-Ill.) “And you would have loved it. It was an interesting place. We had bills, and amendments … we did big things.”

Senate Republicans have unsurprisingly ignored a raft of liberal measures passed by the Democratic House, including bills to curb gun violence or overhaul election laws. But even ostensibly less controversial legislation to reauthorize the Violence Against Women Act or strengthen retirement security have also run aground amid partisan bickering.

The only measures regularly moving are must-pass bills to avoid a shutdown, and lawmakers are still struggling to reach a long-term deal to fund the government.

McConnell has made no secret that stacking the judiciary with conservatives is a top priority. But he also argues that the Senate could do more if the House wasn’t stalling on matters like the United States-Mexico-Canada trade agreement or the annual defense policy bill.

“If [Democrats] are going to keep plowing ahead with their impeachment obsession, they cannot abdicate their basic governing responsibilities at the same time,” McConnell said recently.

Speaker Nancy Pelosi is pushing her own legislation to curb the cost of prescription drugs, but McConnell has said it has no chance in the Senate.

Most Republicans have long opposed federal intervention when it comes to the cost of prescription drugs, but public support for action as well as Trump’s embrace of the issue may be shifting the party’s stance.

The GOP leader said in September that the Senate’s next steps on prescription drugs were “under discussion” and that the chamber is “looking at doing something on drug pricing.” Still, McConnell has demonstrated little interest in taking up Grassley’s bill, which would cap seniors’ out of pocket costs on drugs in Medicare and penalize companies that levy large price increases, among dozens of other measures aimed at lowering spending on medication.

That’s despite Trump saying he likes Grassley’s bill “very much” and top White House aides throwing their support behind the legislation.

Health industry sources closely tracking the Senate proposal, say McConnell’s office is not making an effort to help the White House get his members on board.

Asked whether McConnell would bring the bill to the floor, one Republican senator said, “I can’t imagine. … It’s like Grassley, and a couple of Republicans and all the Democrats on the committee.”

Grassley has acknowledged that any action on his bill is likely slip into 2020 and that the measure currently doesn’t have enough support to pass in the Senate.

“I think sooner or later people are going to say, ‘we’d like to do more than confirm judges and talk about impeachment.’”

Grassley and Sen. Ron Wyden (D-Ore.), the bill’s coauthor and the Finance Committee’s ranking member, are trying to make changes to the bill to garner more Republican backing.

“This bill may not have 60 votes today, but when Republicans wake up to the fact that 22 of them are up for reelection and in every state it’s an issue … they are going to soon realize that this is the road to do something responsible,” Grassley said at an event late last month . “But we’re not there yet.”

Since the legislation advanced out of the Senate Finance Committee in July, administration officials including Health and Human Services Secretary Alex Azar and Joe Grogan, director of the White House Domestic Policy Council, have been on the Hill pushing the bipartisan bill with little to show for it.

The measure was approved by the panel on a 19-9 vote, with six Republicans joining all Democrats and nine Republicans opposed. A chairman advancing a bill through committee over the opposition of most in his party is an unusual event, but the fact underscores Grassley’s commitment to moving ahead.

GOP senators who voted against the bill largely cited a proposed change to Medicare’s prescription drug benefit that they say is akin to implementing government price controls; it would impose financial penalties on companies that raise prices faster than inflation.

Grassley has said provision is necessary to keep Democrats on board with the bill. But even some of the Republicans who voted for it in committee have indicated they might not support final passage on the floor if that language remains.

The Senate HELP Committee approved a bill this summer that would aim to prevent surprise medical bills, raise the legal age to buy tobacco to 21 — a priority of McConnell’s — and increase competition in the drug industry. While the White House hasn’t backed the package explicitly, Grogan penned an op-ed this past Wednesday calling on lawmakers to “come back to Washington in December ready to vote to protect patients from surprise medical bills.”

Momentum on the legislation stalled after pushback from doctors and dark money groups over how to resolve “surprise” bill disputes between insurance companies and health care providers. Senate GOP leadership hasn’t given any assurances it would bring the measure to the floor, though one Senate Republican aide said it could become part of an end-of-year spending package.

“I hope we can come up with a consensus document the leaders could attach to any piece of legislation they want to attach it to,” HELP Chairman Lamar Alexander (R-Tenn.) told reporters recently. “I think sooner or later people are going to say, ‘We’d like to do more than confirm judges and talk about impeachment.’”

Indeed, the Senate has not been doing much legislating these days. Republicans have instead prioritized the confirmation of judicial and executive branch nominees, even changing Senate rules to speed up the process. So far this Congress, the Senate has held 268 votes on nominations, compared to 98 votes on legislation.

The House has sent more than 300 bills over to the Senate, and Democrats are quick to point out that many of them have Republican support.

Even efforts to address issues of bipartisan concern are faltering amid partisan rancor.

Take the Violence Against Women Act. Negotiations between Sens. Joni Ernst (R-Iowa) and Dianne Feinstein (D-Calif.) to reauthorize the landmark law fell apart earlier this month with finger-pointing on both sides.

Democrats want Republicans to bring up the House-passed bill, which would broaden the anti-domestic violence law to ensure that people convicted of dating violence or stalking cannot obtain a firearm. Meanwhile, Ernst now has her own version of the bill and accused Senate Minority Leader Chuck Schumer (D-N.Y.) of trying to deny her a win as she campaigns for reelection. Schumer responded that Ernst is “afraid of the NRA.”

A push to bolster Americans’ retirement security has also stumbled lately. The House passed a bill in May to encourage people to contribute more to retirement savings accounts by a 417-3 vote, but it hasn’t gotten far in the Senate.

Sen. Pat Toomey (R-Pa.) recently sought to move forward on the legislation with some amendments, but Democrats blocked the request over the Republicans’ proposed changes. Sen. Patty Murray (D-Wash.) said the amendments “are not in the interest of working families and will kill any chance this bill has of becoming law.”

Toomey, meanwhile, is happy to see progress on judges but is still hoping to get some more bills signed into law.

“I’m very pleased with the tremendous progress we’ve made filling vacancies on the federal courts. Very, very constructive,” Toomey said. “But I would like to see more legislative activity.”