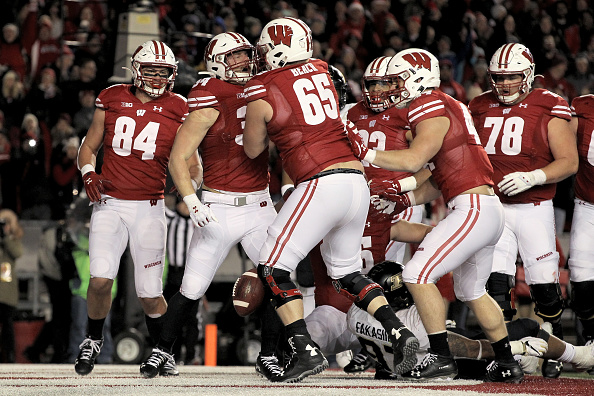 The Wisconsin Badgers treated Saturday like a business trip when they traveled to face Minnesota in the regular-season finale, and the Gophers wanted to treat it like a trip back in time. In the end, the battle for Paul Bunyan’s axe went back to Wisconsin.

Wisconsin dominated Minnesota in the second half and cruised to a 38-17 win to wrap up a spot in the Big Ten Championship game next weekend. Wisconsin (10-2) will face No. 1 Ohio State (12-0) at Lucas Oil Stadium in Indianapolis, Indiana on Dec. 7.

Wisconsin has won two Big Ten championships (2011, 2012) and Ohio State has won three, including the last two (2014, 2017, 2018). This will be Wisconsin’s sixth championship game appearance, which leads all schools in the conference.

Saturday’s game between the Badgers and Gophers was hyped enough to draw ESPN’s College GameDay road show, which went live Saturday morning with fans braving the cold and sleet rain.

Minnesota (10-2), No. 8 in the current College Football Playoff rankings entering Saturday, started the scoring early when quarterback Tanner Morgan tossed a 51-yard touchdown pass to Rashod Bateman to give the Gophers a 7-0 lead.

No. 12 Wisconsin answered in the second quarter first with a 26-yard field goal by Zach Hintze, and then a 28-yard pass from Jack Coan to running back Jonathan Taylor to give the Badgers a 10-7 lead they would take into halftime.

The snow started coming down heavy in the second half, and so did the Wisconsin points. Coan threw a 47-yard touchdown pass to Quintez Cephus, and four minutes later, Kendric Pryor scored on a 26-yard run to give Wisconsin a 24-10 lead.

Taylor, one of the nation’s best running backs who was held to under 100 yards, had scorting runs of 11 yards and 1 yard to give Wisconsin a 38-10 lead. Taylor had three-consecutive games of 200 yards or more rushing coming into the game.

Minnesota tacked on a late touchdown to end all scoring.

Coan finished the day with 280 passing yards and two touchdowns on 15 completions.

Morgan had 296 yards passing with two touchdowns after completing 20-of-37 passes and one interception—the only turnover of the game.

Minnesota hasn’t seen success like they’ve experienced this year since the 1961 season, which was their last Rose Bowl appearance. The Gophers haven’t reached 10 wins in a single season since 1904 when they won 13. They have nine claimed national championships, with the last in the 1960 season. Their last conference title was a co-championship in 1967, and they still haven’t had an undefeated home season since 1954.