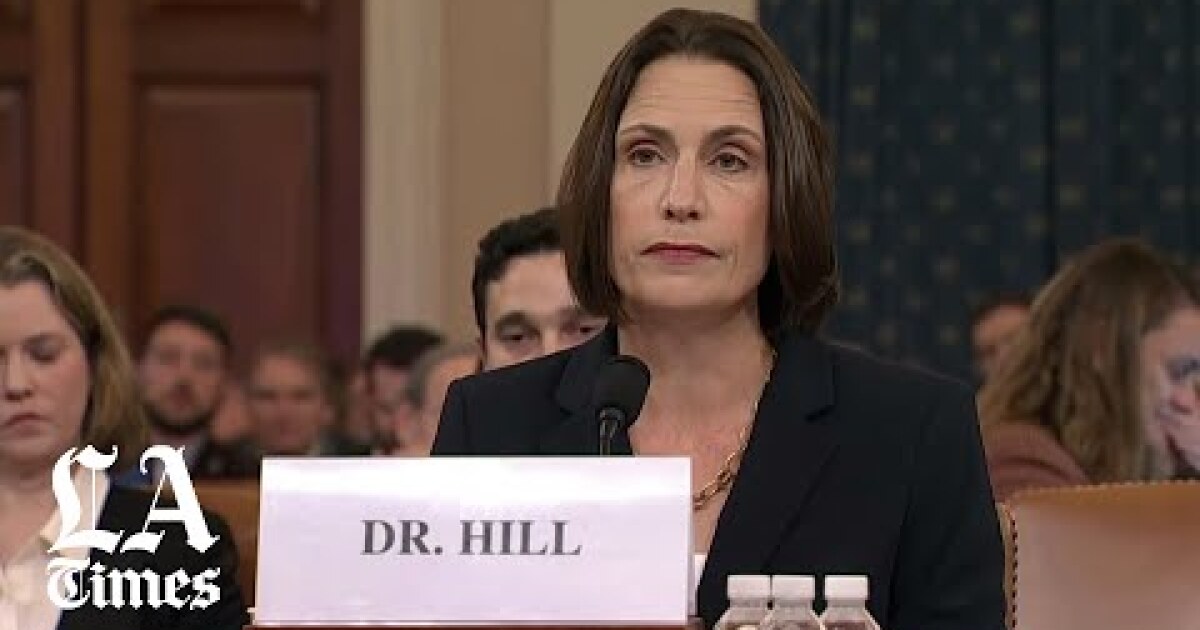 Two weeks of public hearings in the impeachment inquiry against President Trump have closed with a collective warning from witnesses: Russia is again trying to sow political discord in the U.S. and interfere in the presidential election in a repeat of its success in 2016.

In five marathon days of testimony, a dozen current and former officials recounted in vivid detail how Trump and his aides withheld a White House meeting sought by Ukraine’s newly elected president and also withheld military assistance from the embattled country. The motive, witnesses said, was to strong-arm Ukraine’s new government into investigating Trump’s political opponents in the last election and the next.

The hearings before the House Intelligence Committee produced extensive new evidence on the pressure campaign set in motion by Trump’s personal lawyer, Rudolph W. Giuliani, and the actions of the three government officials Trump designated to work with him. But as Congress goes on a long Thanksgiving break, there is no sign that the damaging testimony had swayed Republican lawmakers to support impeaching the president or ultimately convicting him.

— Lawyers for the House, citing the “rapidly advancing impeachment inquiry,” have urged the Supreme Court to reject Trump’s bid to shield his tax returns and financial records from congressional investigators. Meanwhile, California’s highest court has decided that the state cannot require presidential candidates to disclose five years of tax returns to appear on the primary ballot.

— Trump has signed a short-term funding bill, averting the threat of a government shutdown until next month. That gives negotiators four more weeks to try breaking an impasse involving funding for Trump’s border wall project.

— Trump appeared to upend a Navy SEAL administrative board days before it was set to begin by tweeting that the Navy will not strip a decorated SEAL of his coveted trident pin and expel him from the elite force after his court-martial conviction for posing with the corpse of an enemy combatant.

Can ‘The Magician’ Make This Disappear?

As the impeachment inquiry in Washington plays out, one of the world leaders Trump once counted as a best buddy is facing his own crisis. Israeli Prime Minister Benjamin Netanyahu has been indicted on charges of fraud, bribery and breach of trust, raising the prospect that the country’s longest-serving leader will be forced out of office. Netanyahu, who’s been so adroit at sidestepping adversity in the past that one of his nicknames was “the Magician,” is sounding a lot like Trump in calling the investigation into him “tainted” and tantamount to “an attempted coup.”

A Community in Mourning and in Fear

In Fresno, police are still trying to solve who opened fire at a backyard football watching party on Sunday, wounding 10 Hmong men, four of them fatally. The killings have brought sudden, unwanted attention to the nation’s second-largest Hmong community, whose members have had to cope with international media coverage and react to suggestions by police that the violence was gang-related and could continue. But mostly, they are grieving for those who died.

Exposed to the Elements

With the first storm of the season having hit Southern California this week and more on the way for Thanksgiving, tens of thousands of people who bed down on the streets are struggling to stay dry and warm. It’s a particular problem now, given that the Los Angeles Homeless Services Authority won’t be launching its winter shelter program until Dec. 1 because of funding constraints. Last year, five homeless people died in L.A. County of causes that included or were complicated by hypothermia, according to the coroner’s office.

On this date in 1961, thousands of spectators crowded Hollywood Boulevard to catch a glimpse of Saint Nick at what was then known as the Santa Clause Lane Parade. Back in the ‘20s, merchants had gotten together to transform a stretch of the street into Santa Clause Lane, and as it grew in popularity, it eventually became what Angelenos now know as the Hollywood Christmas Parade. Here are more archival photos of parades past and the changing Hollywood streetscape.

— The L.A. Department of Water and Power‘s aging equipment is a risk for sparking wildfires, Controller Ron Galperin warns, urging in a new audit that the utility speed up repairs.

— The gun used in last week’s shooting at Saugus High School was a so-called ghost gun — one assembled from parts, without a registration number, authorities say. But who built it?

— A controversial proposal to require a fourth year of math for admission to Cal State is being questioned by top educators and others who said it would impose an unfair barrier for black and Latino students, with no guarantee of improving graduation rates.

— Getting started on the big Thanksgiving meal? Our food team has ideas, from cooking your turkey like it’s a ham to ditching it entirely for a head of cauliflower to seasoning your pumpkin pie like it’s Nashville hot chicken. Plus, for your entertainment, here are our official Thanksgiving food power rankings.

— Getting an even earlier head start on holiday shopping? Our gift guides can help, whether you’re shopping for a foodie, a fashionista or a fitness fiend.

— Beach scenery and a small-town vibe make Todos Santos a calming Mexico getaway — before, after or in lieu of the holiday hubbub.

— The Mr. Rogers biopic “A Beautiful Day in the Neighborhood” manages to feel entirely truthful even within its own Neighborhood of Make-Believe, our critic writes.

— “Crazy Rich Asians” director Jon M. Chu denied Brenda Song’s claim that she was passed over for a role because she’s “not Asian enough.”

— The big winner in Thursday’s Spirit Award nominations was indie distributor A24, whose “Uncut Gems” and “The Lighthouse” each got five.

— A Utah woman who was charged with a crime after her stepchildren saw her shirtless in her own home is fighting the case that could force her to register as a sex offender. She and her husband were both shirtless. Only she was charged.

— Cursed or unlucky? Villagers in the Guatemalan town of 15 de Octubre La Trinidad who survived civil war must flee again, this time from a volcano.

— Religious restrictions on healthcare have created a public health crisis, columnist Michael Hiltzik writes. New revelations about the University of California’s contracts with Catholic hospitals show how deeply such restrictions have infiltrated an institution that should be a bulwark against them.

— Tesla has unveiled its long-awaited pickup, the Cybertruck. It’s … different.

— L.A.-based arthouse cinema chain Laemmle Theatres is taking down its “for sale” sign, but it has closed its historic Music Hall location in Beverly Hills.

— Chip Kelly understands the magnitude of the UCLA-versus-USC rivalry.

— Carli Lloyd is still thinking about trying to play in the NFL and got offers from two teams to kick in a preseason game.

— Despite the Clippers’ growing pains with new stars Kawhi Leonard and Paul George, there’s a reason the team can still win. And to be the best, they just need to be a superstar version of what they were a year ago, Dan Woike writes in a column.

— Rep. Tulsi Gabbard’s Democratic colleagues in Congress have apparently had about enough of her. (Politico)

— Will there ever be a #MeToo-style movement for bad bosses? (The Cut)

— Two North Carolina pastors were merging their churches — one black, one white. When a police killing the next day upended their communities, they realized their bond, led by their faith, could create a better America. (New York Review of Books)

Three words: Kanye West’s opera. Yes, the rapper, singer, songwriter, public speaker, producer and fashion designer can now add opera composer to his resume, with “Nebuchadnezzar” premiering at the Hollywood Bowl on Sunday. In keeping with West’s recent spiritual rebranding, the opera is based on a biblical story. Beyond that, not a ton is known about a work announced less than a week ago. But if you’re tempted to plunk down the $20 to $575 to attend, here’s everything we know.