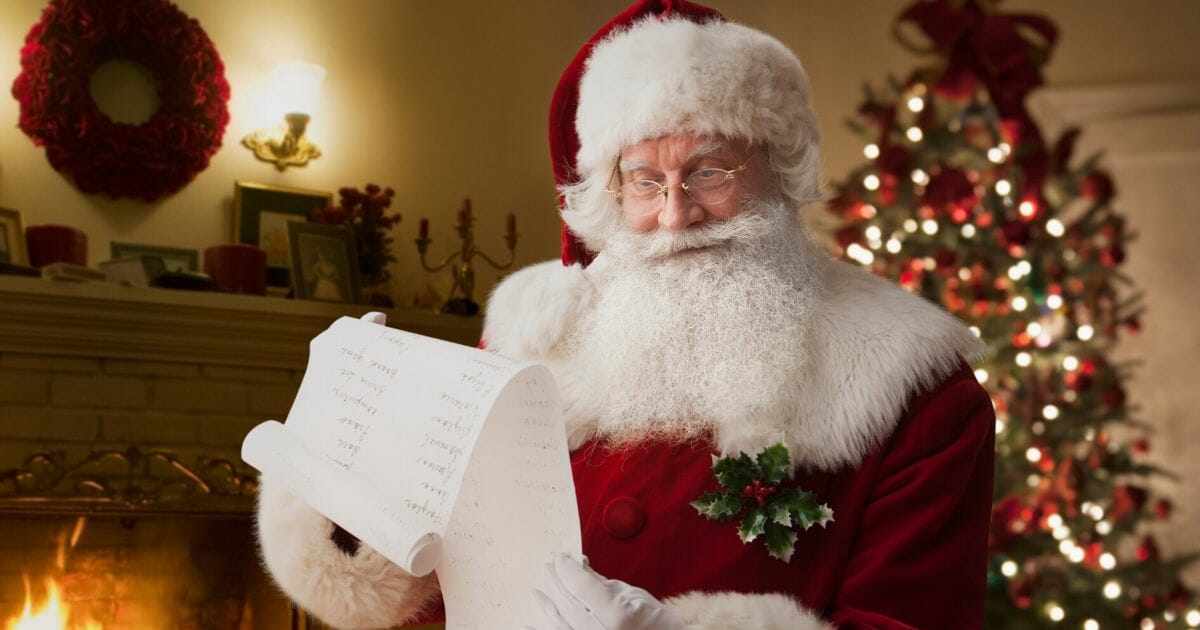 When people think of Santa Claus, they think of the iconic old man with a long white beard and a red suit who leaves presents behind for all the good little children.

However, some liberals appear to have finally come to the triggering realization that Santa is a white male (specific emphasis on the “white” part).

And apparently, some people now think that Santa needs to change his identity and get with the times.

Last year, logo creation company Graphic Springs conducted a survey asking people from the U.S. and the United Kingdom how they would modernize Santa, according to the U.K. Mirror.

There were some funny responses — 23 percent of respondents suggested Santa should have an iPhone, and 22 percent said that he should travel in a flying car.

TRENDING: Obama Made Americans Buy Insurance, but Judge Stops Trump Rule That Immigrants Do the Same

However, things got a bit disturbing with one particular survey question: “If you could ‘rebrand’ Santa for modern society, what gender would he be?”

Nearly 28 percent of respondents said they thought Santa should be rebranded as a woman (10.6 percent) or as a “gender-neutral” individual (17.2 percent).

The idea of changing Santa’s gender is, of course, absolutely ridiculous and straight-up horrifying for a number of reasons.

I hate to spoil the fun, but Santa Claus is a fictional character. Perhaps the people who think Santa’s gender is something to worry about were never told this.

Do you think Santa needs to be modernized?

However, the concept of Santa is based off of a real man: Saint Nicholas.

Saint Nicholas was a bishop born during the third century who was known for his love for children and his generosity toward the needy. Sadly, he was persecuted and imprisoned for his faith in Jesus.

Over the centuries, European Christians celebrated St. Nicholas Day on Dec. 6 — a time when they would recount the stories of his compassion and kindness.

To decide to reclassify the gender of a real, deceased person is to deny both history and reality.

RELATED: In Quest To Ruin Everything, Many Millennials Want Secret Santa Banned Because It’s Too High-Pressure

This is another toxic example of political correctness culture and intersectionality.

If you’re not familiar with intersectionality, Reason’s Robby Soave has offered a concise definition.

“The idea is that various kinds of oppression — racism, sexism, homophobia, transphobia, economic inequality, and others — are simultaneously distinct from each other and inherently linked,” he wrote.

What liberals don’t seem to realize is that the concept of intersectionality will eventually collapse on itself; the latest intersectional injustice will always be displaced by an even newer one because infinite intersections exist.

For the left, there will always be another aggrieved class.

Once they move on from Santa, they’ll push to celebrate gay male couples on Mother’s Day. But by blurring the lines of identity, they will only create further confusion.

With leftists, there’s no end to victimhood. When it doesn’t exist, they create it.

Their message flies in the face of the hope of Christmas.

Christmas is about celebrating the birth of Christ and the generosity and compassion that God has shown to humanity.

That was what Saint Nicholas originally represented.

It would be better to accept reality for what it is and work to love others, no matter who they are.

But true love is not what the left is after.

By arguing over what gender Santa should be, the left is simply distracting people from the true message of Christmas.