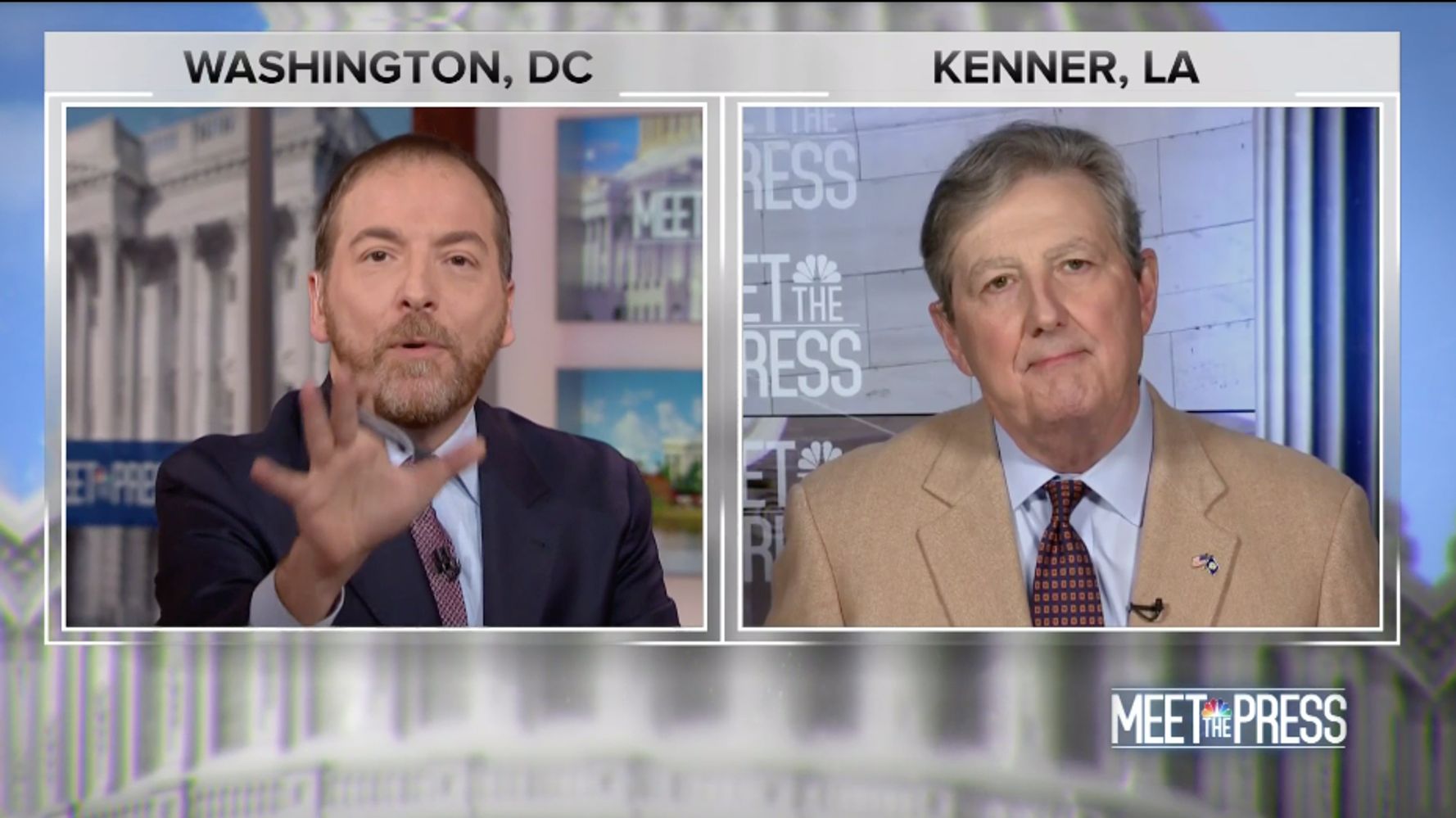 NBC’s Chuck Todd on Sunday forcefully pushed back on a claim made by Sen. John Kennedy (R-La.) that Ukraine, like Russia, interfered in the 2016 election ― a theory peddled by the Kremlin and rejected by U.S. intelligence agencies.

“I think both Russia and Ukraine meddled in the 2016 election. I think it’s been well documented,” Kennedy said during an appearance on NBC’s “Meet The Press.”

Though Kennedy has backtracked on his comments from last week, in which he appeared to suggest Ukraine may have been behind the 2016 cyberattack against the Democratic National Committee.

Todd pointed out that the U.S. intelligence community has said that’s not true. He also noted that Fiona Hill, the former top Russia expert in the National Security Council, testified before Congress last month that Ukraine did not meddle in the election.

What’s more, Todd said, senators were reportedly briefed by U.S. intelligence officials after Hill’s testimony that Russia is behind the push to frame Ukraine for its own U.S. election interference.

WATCH: @ChuckTodd asks @SenJohnKennedy if he is “at all concerned that he has been duped” into believing that former Ukraine president worked for the Clinton campaign in 2016 #MTP #IfItsSunday@SenJohnKennedy: “No, just read the articles.” pic.twitter.com/A0rLu03F8j

Kennedy denied having been briefed on Russia’s efforts, and added, “Dr. Hill is entitled to her opinion.”

Todd fired back: “When does opinion become fact? Does 17 intelligence services saying it; does every Western intelligence ally saying Russia did this? I’m just sort of confused. At what point is it no longer an opinion for you?”

But Kennedy claimed it’s a “fact” that Ukraine interfered in the election, pointing to past articles in Politico and The Financial Times that reported that Ukrainian officials criticized Trump ahead of the 2016 election, given his Russia-friendly comments at the time.

In July 2016, Trump hinted that he supported the 2014 Russian invasion of Crimea, which is internationally recognized as a part of Ukraine. Ukrainian officials swiftly denounced his remarks.

“Russia was very aggressive and they’re much more sophisticated,” Kennedy said Sunday. “But the fact that Russia was so aggressive does not exclude the fact that [former Ukrainian President Petro Poroshenko] actively worked for [Hillary Clinton].”

An exasperated Todd interrupted Kennedy, after his claim about Poroshenko, for which there is no evidence.

“You realize the only person selling this argument outside the United States is … Vladimir Putin?” he asked. “You’ve done exactly what the Russian operation is trying to get American politicians to do. Are you at all concerned that you’ve been duped?”

Todd continued to grill him, asking if the senator believes there’s a difference between Ukrainian officials criticizing a presidential candidate who endorsed the invasion of their country — as Trump had — compared to Russia hacking the DNC servers.

“Let’s suppose ― and I don’t believe ― but you’re right and I’m wrong,” Kennedy said. “Then what harm would it do to allow the president of the United States, who has a demonstrated record of fighting foreign corruption, to introduce evidence?”

Todd noted that Trump has been given “every opportunity to provide exculpatory evidence” on the matter and hasn’t done so.

Kennedy then claimed the ongoing impeachment inquiry into Trump, which is centered on the president’s efforts to get Ukraine to investigate former Vice President Joe Biden, is “as rigged as carnival ring toss.”

He also claimed Trump hasn’t been able to call his own witnesses or have legal representation during the hearings.

However, House Judiciary Chairman Jerry Nadler (D-N.Y.) asked Republicans last week which witnesses they would like to have testify on behalf of Trump. Nadler also invited the president’s attorneys to come to the hearings as the impeachment inquiry proceeds.