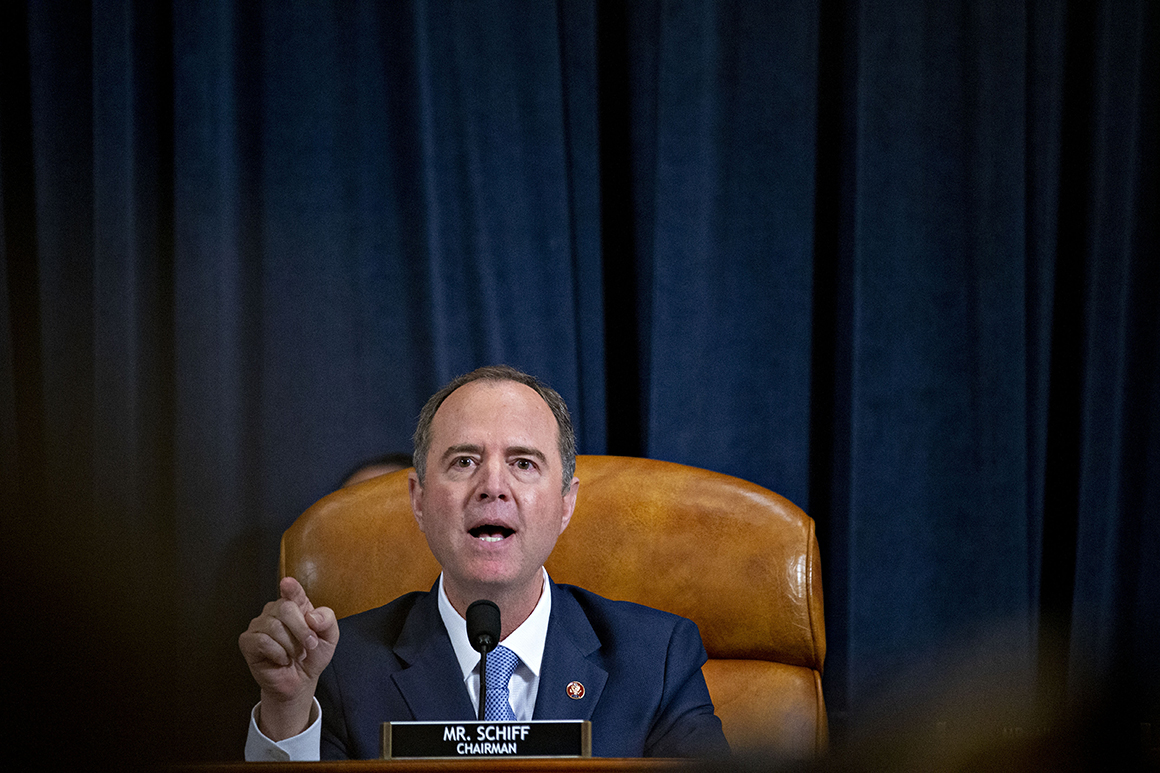 Schiff had also indicated that his committee was still open to receiving new witnesses or testimony as it began to draft the report, but it’s unclear if any new information has become available since lawmakers departed for a one-week Thanksgiving recess.

The Ukraine report is expected to make up the core of Democrats’ likely articles of impeachment against Trump. Lawmakers leading the inquiry have suggested Trump could face an article alleging abuse of power for withholding military aid and a White House meeting from Ukraine while Trump and his allies pressured the country’s new president to investigate Democrats.

The House has been moving quickly to investigate Trump since Speaker Nancy Pelosi announced the impeachment inquiry on Sept. 24. Democratic leaders, including Pelosi, have refused to assign a public end date to their investigation but many lawmakers have said privately they hope to wrap up by the end of the year.

The House Judiciary Committee is slated to hold its first impeachment hearing on Wednesday, with a panel of constitutional experts explaining exactly what constitutes an impeachable offense, including defining the nebulous “high crime and misdemeanor” term specified in the Constitution.

Trump’s counsel has also been invited to attend and participate in the hearing. House Judiciary Committee Chairman Jerry Nadler (D-N.Y.) gave Trump until Dec. 6 to indicate whether he planned to participate but the White House has yet to do so.

Senior Judiciary aides would not elaborate on other potential impeachment hearings. But Democratic lawmakers and aides say the committee is expected to have at least one more hearing, likely the second week of December, in which Democrats will present their case against Trump. The committee is then expected to draft and vote on articles of impeachment, teeing up a full House vote before the Christmas recess.

Lawmakers on the committee spent the weekend sparring over the makeup of that panel of constitutional experts, with the committee’s top Republican, Rep. Doug Collins (R-Ga.), requesting that it include an equal number of witnesses favorable to the Democratic and Republican perspective. He said such a balance would be a “small concession” toward bipartisanship, and he noted that a similar panel during the Clinton impeachment process was much larger.

Trump has made clear he intends to portray the hearings as a partisan distraction from more urgent work of the nation. He tweeted Saturday about flying to London next week for a NATO summit, chiding Democrats for holding their first hearing “on same dates as NATO.”

Since the announcement of the inquiry, House impeachment investigators have collected hundreds of hours of closed-door depositions and public testimonies from 17 current and former officials on Trump’s efforts to pressure Ukraine to open investigations that could help his reelection campaign.

Though it’s unclear precisely what the report will find, Democrats leading the inquiry have throughout the process suggested that what’s already publicly known has been sufficient to prove Trump violated his oath of office.

A transcript of a July call between Trump and Ukraine’s recently elected president Volodymyr Zelensky — released in September by the White House — is the centerpiece of their evidence. On the call, Trump asks Zelensky to investigate former vice president Joe Biden.

Democrats have spent recent weeks privately debating which allegations against Trump to include in articles of impeachment they are expected to draft. Senior Democrats have said they want to keep the inquiry focused on the Ukraine scandal.

But other Democrats, including several on the Judiciary Committee, have pushed back, arguing that they should expand their investigation to include the obstruction of justice allegations detailed in special counsel Robert Mueller’s report and other alleged misdeeds committed by the president.