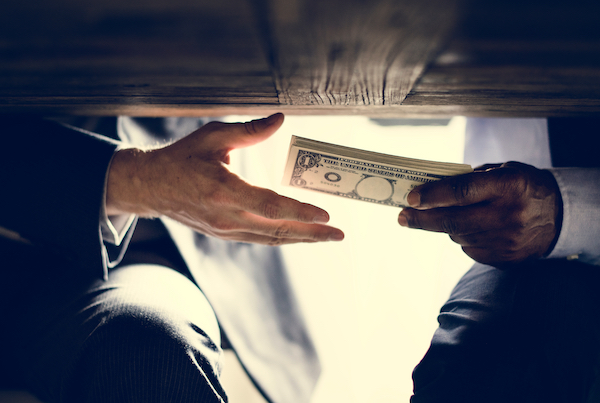 House Speaker Nancy Pelosi, D-Calif., used the word “bribery” to refer to the allegations against President Donald Trump after the first day of public impeachment hearings.

Pelosi told reporters that “the bribe is to grant or withhold military assistance in return for a public statement of a fake investigation into the elections. That’s bribery.”

“Bribery” is certainly an easier concept for most people to understand, and pronounce, than “quid pro quo,” the Latin term for “something for something” that had been used for weeks by lawmakers and the president himself.

But there’s another reason Pelosi’s choice of words is potentially significant: The Constitution explicitly lists “bribery” as one of the grounds for impeachment — “Treason, Bribery, or other high Crimes and Misdemeanors.”

Here’s a rundown of answers to several questions about bribery law.

How might the Ukraine case fit into the legal definition of bribery?

The argument for those seeking Trump’s impeachment is that Trump (a public official) demanded something of value (an investigation into a potential challenger, Joe Biden, and into a theory that Ukraine rather than Russia meddled in the 2016 elections) corruptly (because it personally benefited him) in exchange for an official act (releasing the congressionally approved military aid to Ukraine).

It’s important to note that impeachment has a lower threshold than “beyond a reasonable doubt,” as would be the case in a criminal trial.

What’s the best defense against the allegation of bribery?

The hardest part for Trump’s critics to prove would showing that what Trump wanted “was a thing of value, as opposed to a genuine interest in exposing actual corruption,” said Barbara McQuade, former U.S. Attorney for the Eastern District of Michigan. “The evidence will help show which version is true.”

A related argument the president could make  would be that he “was acting pursuant to his constitutional power to direct foreign relations,” said Stanley M. Brand, a white-collar attorney with the firm Akin Gump Strauss Hauer & Feld LLP. In other words, the president could argue that he has the right to pursue an agenda he deems proper.

What aspect of an interaction qualifies as bribery?

Does the offering of a bribe, whether or not it’s accepted, count as bribery? Or does it become bribery only after acceptance of a two-way deal?

Any distinction between attempted bribery and completed bribery is linguistic rather than legal. Both are treated as crimes, said Juliet Sorensen, a Northwestern University clinical law professor.

“For the person offering the bribe, the criminal liability attaches once the bribe is offered,” Sorensen said. “It doesn’t matter whether it is accepted.”

The relevant portion of federal law, 18 USC 201, defines bribery of a public official as “whoever directly or indirectly, corruptly gives, offers or promises anything of value to any public official … with intent to influence any official act.”

“Bribery can take many forms,” McQuade said. “One is demanding a thing of value in exchange for the performance of an official act. The crime is complete upon the demand, even if the thing of value is not provided.”

Is there a legal difference between an official soliciting a bribe and being presented with a bribe unsolicited?

Either soliciting a bribe or receiving one unasked qualifies as bribery, legal experts said. And the people on both ends of a bribe are liable under the law.

Peter Henning, a Wayne State University law professor, said that he finds it helpful to think about how a corrupt Chicago alderman might operate. “If someone wanted something done, they would hand an aide a couple hundred dollars,” Henning said. “That would be a bribe. The idea is that ‘unless you give me this, I don’t give you that.’ It can be implied.”

About the only way for an official to defend themselves against charges of this type, Sorensen said, would be if the official demonstrated that they didn’t have corrupt intent in accepting an unsolicited bribe. But this could be a hard argument to make.

Does the promised official act need to be completed in order for a bribe to have occurred?

No official act needs to be completed for bribery to have been committed, Brand said.

He pointed to the 1972 Supreme Court decision in United States vs. Brewster. The court found that “there is no need for the government to show that appellee fulfilled the alleged illegal bargain; acceptance of the bribe is the violation of the statute, not performance of the illegal promise.”

How does “quid pro quo” fit in to bribery?

The term quid pro quo is not officially part of the legal definition, but the concept often does come into play as prosecutors seek to prove their case in court.

Quid pro quo is frequently “an element” of bribery cases, McQuade said. “It may be explicit or implied.”

Regardless of the impetus for the linguistic shift, legal experts said it could have consequences for the impeachment push. By bringing an allegation of bribery into the conversation, “Pelosi has really upped the ante,” Henning said.