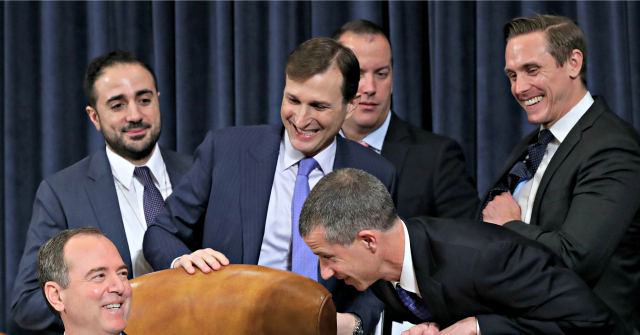 House Intelligence Committee members are expected to review their report regarding the ongoing impeachment investigation into President Donald Trump’s telephone call with the leader of Ukraine, according to a report.

Politico said Saturday that members will be granted up to a 24-hour review period and are slated to sign off on the report Tuesday. The news outlet noted that following the report’s approval, the House Judiciary Committee will likely begin drafting articles of impeachment. Earlier this week, House Intelligence Committee Chairman Adam Schiff (D-CA) suggested in a letter to lawmakers that the report would arrive “soon.”

Saturday’s report comes after Rep. Jerry Nadler (D-NY), chairman of the House Judiciary Committee, sent a letter to President Trump in which he set a December 6th deadline to establish whether the president’s legal team will participate in the panel’s public impeachment proceedings.

Democrats previously set a Sunday deadline for the Trump administration to answer whether it will participate in the committee’s first impeachment hearing, scheduled for Wednesday.

A separate letter was sent Friday to judiciary committee ranking member Rep. Doug Collins (R-GA), informing him of the new deadline given to the White House.

The Deep Stater, who Real Clear Investigations suggests may be Eric Ciaramella, alleged the president pressured Zelensky to probe allegations of corruption against former Vice President Joe Biden and his son, Hunter Biden, in exchange for U.S. military aid. The White House responded to the complaint’s framing by releasing a transcript of the conversation showing neither President Trump nor Zelensky tied the potential probe to the aid money.

During last week’s hearings held by the House intel panel, numerous witnesses testified that they believe no “quid pro quo” took place during the Trump-Zelensky call, with the exception of Gordon Sondland, the U.S. Ambassador to the E.U. However, in a significant exchange with Rep. Mike Turner (R-OH), Sondland conceded nobody told him the president sought to tie the aid to an investigation into the Bidens – he simply presumed it.

The UPI contributed to this report.