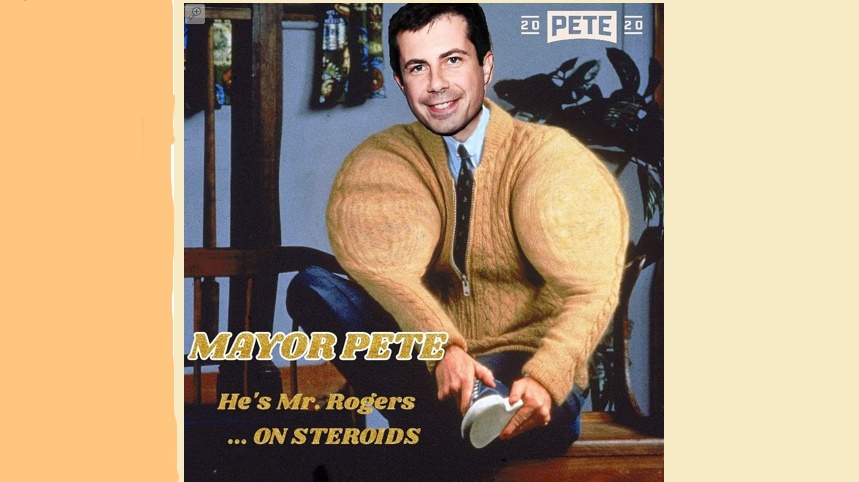 On Friday’s PBS NewsHour, supposedly conservative pundit David Brooks suddenly went pessimistic about how public impeachment hearings are going for the Democrats. Just two weeks ago, Brooks argued Democrats were winning big: “If this were a football game, it would be 42 to 3.” Now he thinks Watergate-length hearingss would be “highly problematic,” after a poll in the swing state of Wisconsin found 40 percent in favor of impeachment, 55 percent opposed.

PBS anchor Judy Woodruff turned to liberal pundit Mark Shields and said time may be running out for Democrats to impeach without interfering with the primaries early next year. Then Shields said something weird about Pete Buttigieg. It was a product placement for PBS. Buttigieg is a regular Mister Rogers!

MARK SHIELDS: But you’re talking about Donald Trump’s counteroffensive. And I think the worst mistake that the Democrats could make is to look for a Democratic Donald Trump. I mean, somebody who can go toe to toe with him and insult to insult with him. American voters, after a president lets them down and disappoints, go looking for the exact opposite of what was missing. They went after George Bush and sort of the off-the-cuff anti-intellectualism. They sought the cerebral, almost removed presence of a Barack Obama.

After Watergate and Vietnam and Lyndon Johnson and Richard Nixon and all that experience, they wanted the outsider, Jimmy Carter. And I don’t think they want more of somebody who can go elbow to elbow and insult to insult. I think, quite frankly, that’s the appeal of Pete Buttigieg, is that he lowers the temperature, he lowers the thermostat, he lowers the rhetoric. He is — he’s the Mister Rogers of this campaign.

On the other hand, Shields lectured that “Medicare for All” is hurting Elizabeth Warren’s campaign.

SHIELDS: I think what happened, there’s a real cold shower of reality into it, Judy. It was 1949, 70 years ago, Harry Truman proposed national health care. It was defeated by calling it socialized medicine….

Finally, in 2010, the Democrats get it. Give Barack Obama credit. Give Nancy Pelosi, people who voted for it credit. It costs a lot of people their careers and their seats. It cost the Democrats their majority.

And it took seven more years before people said they were favorable. Now, the idea that you’re going to pass Medicare for All with the whisk of your hand is just absolutely blowing smoke. It is self-delusion. It’s self-deception.

Woodruff asked “You’re saying that’s what hurt Warren?” Shields said yes: “We found out the cost, I mean, the reality. It’s a cold shower. I mean, nice to talk about it. It ain’t going to happen.”