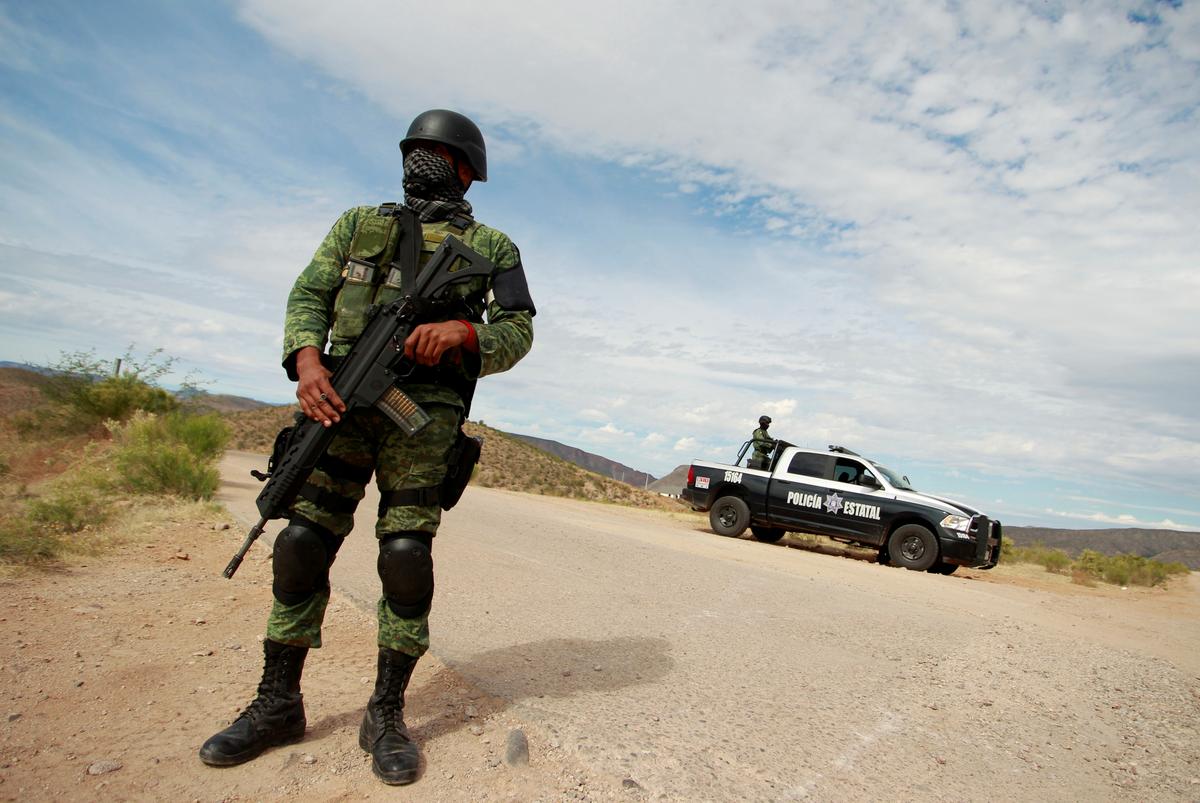 MEXICO CITY (Reuters) – Ten suspected cartel gunmen and four police were killed during a bloody shootout on Saturday in a Mexican town near the U.S. border, authorities from the state of Coahuila said, during a moment of heightened bilateral tension over violent gangs.

FILE PHOTO: A soldier assigned to the National Guard is pictured at a checkpoint as part of an ongoing security operation by the federal government near the Mexican-American Mormon community of La Mora, Sonora state, Mexico November 6, 2019. REUTERS/Jose Luis Gonzalez

The state government said state security officials clashed with gunmen in the small town of Villa Union, about 40 miles (65 km) southwest of the border city of Piedras Negras.

The state government said in a statement shortly afterward three other gunmen were also killed, bringing the total to ten.

An unspecified number of people were also missing, including some who were at the mayor’s office, the governor said.

Around midday, heavy gunfire began ringing out, and a convoy of armed pickup trucks could be seen moving around Villa Union, according to video clips posted by social media users. Others showed plumes of smoke rising from the town.

Reuters could not vouch for their authenticity.

The outbreak of violence occurred during a testing week for the government of President Andres Manuel Lopez Obrador, who on Friday said he would not accept any foreign intervention in Mexico to deal with violent criminal gangs.

Earlier in the week, U.S. President Donald Trump said he planned to designate Mexican cartels as terrorist groups, sparking concerns the move could serve as a prelude to the United States trying to intervene unilaterally in Mexico.

U.S. Attorney General William Barr is due to visit Mexico next week to discuss cooperation over security.

Lopez Obrador took office a year ago pledging to pacify the country after more than a decade of gang-fuelled violence.

A series of recent security lapses has raised questions about the left-leaning administration’s strategy.

Criticism has focused on the Nov. 4 massacre of nine women and children of U.S.-Mexican origin, and the armed forces’ release of a captured son of drug lord Joaquin “El Chapo” Guzman under pressure from cartel gunmen in the city of Culiacan.

Coahuila has a history of gang violence, though the homicide total in the state is well below where it was seven years ago. National homicide levels are pushing record levels.