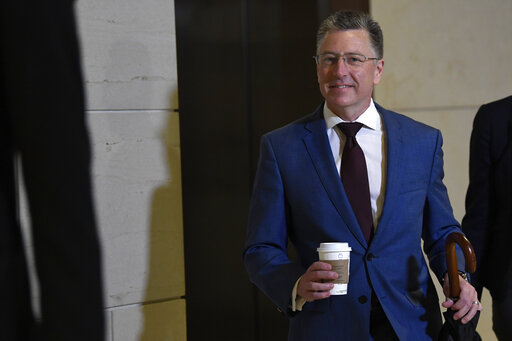 Kurt Volker, the former special representative to Ukraine, is scheduled to testify publicly as part of the House’s impeachment inquiry on the afternoon of Nov. 19.

Volker was one of the self-styled “three amigos” who pursued an alternative diplomatic channel to Ukraine. The other two “amigos” were Ambassador to the European Union Gordon Sondland, who is scheduled to testify Nov. 20, and Energy Secretary Rick Perry. Efforts made as part of this irregular channel were spearheaded by presidential lawyer Rudy Giuliani, according to testimony.

“I encountered an irregular, informal channel of U.S. policymaking with respect to Ukraine — unaccountable to Congress — a channel that included then-Special Envoy Kurt Volker, U.S. Ambassador to the European Union Gordon Sondland, Secretary of Energy Rick Perry, White House Chief of Staff Mick Mulvaney, and, as I subsequently learned, Giuliani,” William Taylor, the top American diplomat in Ukraine, testified in the impeachment inquiry on Nov. 13.

Volker, who’s had a long career as a Republican foreign-policy specialist, resigned his unpaid post on Sept. 27, shortly after the House Intelligence Committee announced that he would be testifying.

He also resigned the academic position he’d held since 2012 — executive director of Arizona State University’s McCain Institute for International Leadership. His departure followed concerns expressed by Cindy McCain, the widow of the institute’s namesake, Sen. John McCain, R-Ariz., that his role in the impeachment inquiry was “overshadowing” the institute’s efforts.

Who is Kurt Volker?

Volker is a former career U.S. foreign service officer, working for more than 23 years on European policy under five presidential administrations, according to his professional biography.

Volker served as Ambassador to NATO from 2008 to 2009. From 2005 to 2008, he was principal deputy assistant secretary of state for European and Eurasian affairs. Before that, he served at the National Security Council for four years, and from 1999 to 2001, he was deputy director of the private office of then-NATO Secretary General Lord Robertson.

Volker served as a State Department legislative fellow to McCain from 1997 to 1998.

As a foreign service officer, he was posted in Brussels, Budapest, London, and several positions in Washington. He speaks Hungarian, Swedish and French.

He has been a strategic advisor to the bipartisan lobbying and public relations firm BGR and previously served the firm as international managing director between 2011 and 2012.

Highlights from his text messages

Volker’s first cooperation with the impeachment probe came when he turned over text messages from the summer of 2019 to lawmakers. The messages include a back-and-forth between Sondland, Taylor, and others discussing, sometimes in elliptical language, contacts with the Ukrainian government related to the alternative channel.

For instance, on July 19, Volker texted, “Good. Had breakfast with Rudy this morning – teeing up call w (Andrey Yermak, a senior advisor to Ukrainian President Volodymyr Zelensky) Monday. Must have helped. Most impt is for Zelensky to say that he will help investigation – and address any specific personnel issues – if there are any.”

And on July 26, Volker wrote, “Good lunch – thanks. Heard from White House – assuming President Z convinces trump he will investigate / ‘get to the bottom of what happened’ in 2016, we will nail down date for visit to Washington. Good luck! See you tomorrow – kurt.”

Highlights from his closed-door testimony

Volker testified behind closed doors on Oct. 3. Here are some of the highlights:

• He minimized his involvement in the proposed Biden investigation: page 18.

Volker made efforts to distance himself from other figures in the texts:

“At no time was I aware of or took part in an effort to urge Ukraine to investigate former Vice President Biden (and his son’s ties with a Ukranian energy company, Burisma). As you will see from the extensive text messages I am providing, which convey a sense of real-time dialogue with several different actors, Vice President Biden was never a topic of discussion. Moreover, … several times I cautioned the Ukrainians to distinguish between highlighting their own efforts to fight corruption domestically, including investigating Ukrainian individuals, something we support as a matter of U.S. policy, and doing anything that could be seen as impacting U.S. elections, which is in neither the United States’ nor Ukraine’s own interest.”

Volker testified about a breakfast he had with Giuliani:

“I said to Rudy in that breakfast the first time we sat down to talk that it is simply not credible to me that Joe Biden would be influenced in his duties as Vice President by money or things for his son or anything like that. I’ve known him a long time. He’s a person of integrity, and that’s not credible. On the other hand, whether Ukrainians may have sought to influence our elections or sought to buy influence, that’s entirely plausible.”

Asked whether anyone else at the State Department ever raised any concerns to him about Giuliani’s role, Volker responded that both Taylor acting assistant secretary of State Phil Reeke “were just very uncomfortable with him being active.”

The problem, Volker said, “was that he was amplifying a negative narrative about Ukraine that was impeding our ability to advance the bilateral relationship the way we wanted.”

• He described what Giuliani wanted to hear from the Ukrainian government: page 191.

Volker: “Following is text with insert at the end for the two key items. We will work on official request.

Democratic staffer: “What did you mean by the two key items?”

Democratic staffer: “And that’s what Rudy Giuliani wanted to be in the statement?”

Rep. Mark Meadows, R-N.C.: “I think it’s critically important that the message to the American people is very clear. And that message that I heard you (say) very loud and clear today is that there was no quid pro quo at any time ever communicated to you. Is that correct?”

Volker: “Not to me, that is correct.”

Meadows: “In your conversations with the Ukrainian officials, was there ever a time where they communicated to you that they believed that there was a quid pro quo?”

Volker: “No. We went over earlier this thing about a statement and how that would be helpful in getting a White House date, but I think that we eventually dropped that, kept working on the date and saying we are still going forward.”

• He said he got no good answers on why military aid to Ukraine had been held up: page 121.

Volker said he learned about the suspension of aid — the alleged leverage held by the White House over the Ukrainian government — on July 18, which was before the call between Trump and Zelensky.

Volker: “Nobody ever gave a reason why. And … I made those contacts specifically to give reasons why we should not have a hold.”

House Intelligence Chairman Adam Schiff, D-Calif.: “But with something this serious and bipartisan and significant, there should be an explanation, right?”

Volker: “There should have been, but there wasn’t.”

• He said he found the whistleblower’s report credible: page 100.

Volker said that except for a few elements, “I thought that it was a fairly accurate characterization.”