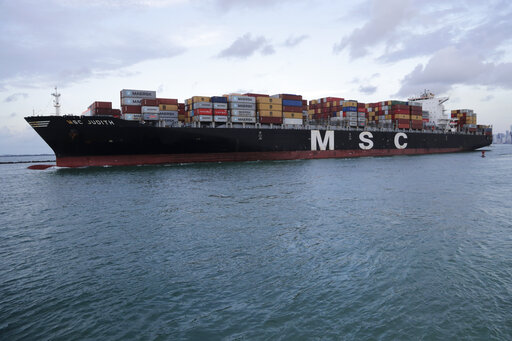 “We talk about it all the time, but under this administration, the great betrayal is over,” Trump said at a rally in Monroe, La., on Nov. 6, 2019. “America is no longer for sale. Thanks to my tariffs, we’re taking in billions and billions of dollars from a country that never gave us 10 cents, China.”

Backers of tariffs say that they help American companies become more competitive with their foreign counterparts. As those companies prosper, the thinking goes, they can hire more workers and pay their employees better. Those workers, in turn, would have more money to spend, and that helps spread those dollars around the economy more broadly.

Tariffs have also strengthened the United States’ leverage after massive job losses from China trade in recent decades, said Scott Paul, who heads the Alliance for American Manufacturing, a group that has applauded some of Trump’s tariff decisions.

Most mainstream economists, however, argue that consumers are the primary victims of tariffs. Tariffs on consumer products hit customers directly, while tariffs on raw materials can produce delays or price spikes that spiral across the economy, interrupting complex and time-sensitive supply chains. Any slowdown in the supply chain could mean layoffs for producers and a hit to the broader U.S. economy.

“As a general matter, import tariffs are a tax,” said Lawrence White, a professor at New York University’s Stern School of Business. “Tariffs, like any tax, generally introduce an inefficiency and makes the two sides of the trading relationship poorer — not richer.”

Studies have shown that lower-income Americans tend to purchase a larger fraction of their income on goods. That means they could feel the pinch worse than more affluent Americans do.

The situation can worsen if other countries raise trade barriers against the United States, thus hurting U.S. companies that export to the rest of the world.

Who pays the cost of a tariff?

When the United States slaps tariffs on goods, it isn’t foreign exporters that make the payment. The importers do, and they’re usually U.S. companies.

“If the U.S. imposes a tariff on Chinese televisions, the duty is paid to U.S. Customs and Border Protection at the border by a U.S. broker representing a U.S. importer — say, Costco,” Howard Gleckman, a senior fellow at the Urban Institute-Brookings Institution Tax Policy Center, has written. “The Chinese government pays nothing.”

Customs and Border Protection typically requires payment within 10 days of their shipments clearing customs, Reuters reported. Companies that don’t pay their amount by that date are sent a new bill.

When the tariff is small, an importer may elect to keep its prices stable rather than pass the tariff cost along to the consumer. But when tariffs are high enough, firms will inevitably pass on some or all of the increase to U.S. consumers, said Monica de Bolle, a senior fellow at the Peterson Institute for International Economics.

Meanwhile, tariffs could mean that producers pay more, as materials that are used to make products sold in the United States rise in price. Those price increases are likely to be passed on to consumers as well. It’s possible that U.S. consumers could find tariff-free products elsewhere, but in many cases, a suitable product may not be available, or may be more expensive or of lower quality.

Revenues from the Trump-imposed tariffs have totaled about $63 billion through June 30, 2019.

That’s much higher than the revenue level before Trump began imposing tariffs. For context, that’s less than 2% of annual federal revenues.

Moreover, some of that money has been spent on payments to farmers hit by retaliatory Chinese tariffs, to the tune of $28 billion over the past two years.

How big an impact have the Trump tariffs had overall?

As we’ve noted, a March 2019 study by the Centre for Economic Policy Research, a London-based think tank, concluded that, using standard economic methods, “the full incidence of the tariff falls on domestic consumers, with a reduction in U.S. real income of $1.4 billion per month by the end of 2018.”

Separately, the Congressional Budget Office projects that the Trump-era tariffs will reduce the national gross domestic product by 0.3 percent by 2020. If that holds up, that would work out to a $75.3 billion dollar hit on economic growth, said Ross Burkhart, a Boise State University political scientist who studies U.S.-Canada trade.

Other estimates are in the same ballpark. The conservative-leaning Tax Foundation projected in May that the tariffs imposed so far by the Trump administration would reduce GDP by 0.25 percent or $63.1 billion, while lowering wages by 0.16 percent and eliminating 195,600 full-time-equivalent jobs.

What tariffs has the United States imposed?

It started with washing machines and solar panels in February 2018, followed by steel and aluminum in March 2018.

The first big expansion into consumer goods from China came in September 2018, affecting home goods, electronics, furniture, backpacks, and other goods. Tariffs on Chinese goods were increased from 10% to 25% in May 2019, and the list of impacted goods expanded in September 2019 to cover some clothes, shoes, televisions and Bluetooth devices.

Tariffs have also been imposed on imports from the European Union, including many food products.

“The overall impact is now over $4 billion per month in extra tariffs on a wide range of goods,” said Daniel Anthony, vice president of the Trade Partnership, a trade-focused consulting firm in Washington.

What are the major products or sectors that have suffered negative impacts from tariffs?

U.S. agricultural exports to China dropped to $9.1 billion in 2018, down from $19.5 billion the previous year, according to the American Farm Bureau Federation. That figure has continued to drop, with exports to China in the first half of 2019 sinking to $1.3 billion. (Bad weather and other factors may have had an impact as well.)

In the meantime, Pepsi, Coca-Cola, Costco and the recreational vehicle-maker Winnebago are among retailers that said they raised prices as a result of the tariffs.

And U.S. imports of “intermediate goods” from China, such as motors, pumps, and semiconductors, have seen price increases, harming U.S. producers. “When the price of these inputs go up, U.S. businesses find it harder to compete against non-U.S. competitors, even in the U.S. market,” Lovely said.