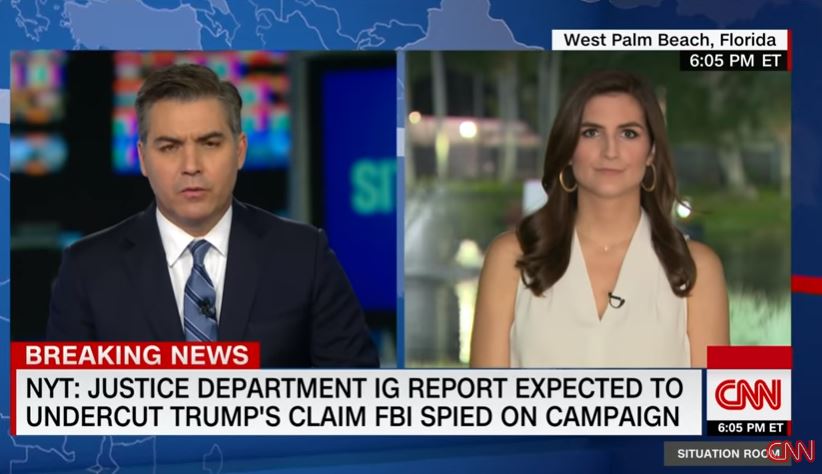 The Inspector General’s report on the origins of the F.B.I.’s investigation into the Trump campaign’s alleged ties with Russia will be released Dec. 9, and New York Times reporter Adam Goldman got a pre-emptive peak (and a pre-emptive defense of the bureau’s conduct) in: “Russia Inquiry Review Is Expected to Undercut Trump Claim of F.B.I. Spying — The F.B.I. never tried to place undercover agents or informants inside the Trump campaign, a highly anticipated inspector general’s report is expected to find.”

The print headline in the Thanksgiving edition was slightly milder: “Review of Russia Inquiry Is Expected to Say F.B.I. Did Not Spy on Trump.” The text box read: “Debunking claims spread widely by conservatives.”

The Justice Department’s inspector general found no evidence that the F.B.I. attempted to place undercover agents or informants inside Donald J. Trump’s campaign in 2016 as agents investigated whether his associates conspired with Russia’s election interference operation, people familiar with a draft of the inspector general’s report said.

The determination by the inspector general, Michael E. Horowitz, is expected to be a key finding in his highly anticipated report due out on Dec. 9 examining aspects of the Russia investigation. The finding also contradicts some of the most inflammatory accusations hurled by Mr. Trump and his supporters, who alleged not only that F.B.I. officials spied on the Trump campaign but also at one point that former President Barack Obama had ordered Mr. Trump’s phones tapped. The startling accusation generated headlines but Mr. Trump never backed it up.

Even though The Times itself reported, in a January 2017 headline that read: “Wiretapped Data Used in Inquiry of Trump Aides.”

Goldman constantly wielded the rhetorical ax for the “undercutting of conservatives,” writing: “The finding is one of several by Mr. Horowitz that undercuts conservatives’ claims that the F.B.I. acted improperly in investigating several Trump associates starting in 2016. He also found that F.B.I. leaders did not take politically motivated actions in pursuing a secret wiretap on a former Trump campaign adviser, Carter Page…”

He even performed public relations for the F.B.I., a rather novel position for a Times reporter to take, relaying the law enforcement officials were “adamant” that their investigations were with merit and without bias.

Even as he wrote this, Goldman waved away some possibly significant caveats to the “no spying” theory: “The F.B.I. did have an undercover agent who posed as Mr. Halper’s assistant during a London meeting with Mr. Papadopoulos in August 2016. And indeed, another Trump adviser, Peter Navarro, reportedly pushed Mr. Halper for an ambassadorship in the Trump administration.”

There’s a lot of hair-splitting going on. Goldman wrote, “Mr. Horowitz found no evidence that Mr. Halper tried to infiltrate the Trump campaign itself, the people familiar with the draft report said, such as by seeking inside campaign information or a role in the organization…”

Goldman must have really squinted to draw all these fine lines between “spying” (the natural word for what the bureau was doing) and “definitely not spying” (which is what the anti-Trump crowd and the New York Times want people to think):

In each case, [the investigators] found that the F.B.I. had not deployed those people to gather information on the Trump campaign itself, the people said.

The report is also expected to debunk another theory of Trump allies: that the F.B.I. relied on information to open the investigation from a British former spy, Christopher Steele, himself a onetime bureau informant who compiled a dossier of damaging, unverified information on Mr. Trump.

The FBI never tried to place informants inside the Trump campaign. They only ran informants to solicit information from people who worked for the campaign. Is it just me, or does this seem like a distinction without a difference. https://t.co/hOVEiLdgyq

The New York Times does not like the word “spying” in relation to the Trump investigations, going to laughable lengths to avoid the word (“cloaked investigators,” read the headline under a front-page story cowritten by Goldman in May).