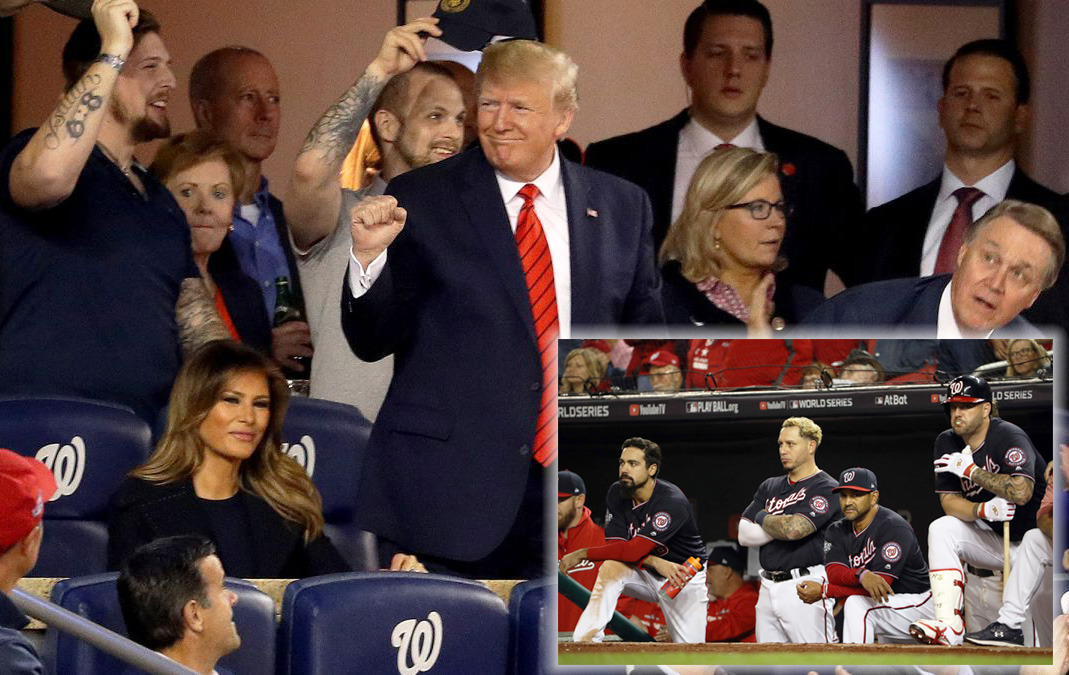 The Washington Nationals lost a third consecutive World Series home game on Sunday in front of a sellout crowd of lobbyists and political consultants, a defeat that all but obliterates the team’s hopes of lifting the Commissioner’s Trophy and bringing a sliver of joy to the dreary lives of Washington, D.C., residents.

After the visiting Houston Astros evened the series at two games apiece with a pair of wins at Nationals Park, many observers had expected the Nats to fare better in game five, not least because President Donald J. Trump would be in attendance. However, Nationals fans likely sealed their fate when they decided to boo and jeer the historically successful commander in chief who recently assassinated ISIS leader Abu Bakr al-Baghdadi in Syria. Some fans even chanted “lock him up!” prior to the home team’s embarrassing 7-1 defeat.

Fans start to boo President Trump when he appeared on the Jumbotron at #Nationals park. Then fans chanted “Lock him up! Lock him up!”

Trump’s historically successful presidency has coincided with a resurgence in American dominance in the world of sports. Earlier this year, golf legend Tiger Woods ended his “Obama drought” by winning the Masters, his first major championship since 2008. The U.S. women’s soccer team won the World Cup in France after Trump tweeted his support.

Unfortunately, the Golden State Warriors suffered an embarrassing defeat to the Toronto Raptors of Canada in the 2019 NBA finals, but only after former president Barack Obama’s attendance at game two in Toronto resulted in a number of the Warriors’ star players suffering mysterious injuries that put the team at a disadvantage for the remainder of the series.

It is worth noting that Obama received a standing ovation in Canada, where he met with Prime Minister Justin “Blackface” Trudeau prior to the American team’s players suffering injuries on his watch. Collusion?

The “Obama curse” has threatened to derail the careers of many of America’s most promising athletes, including NBA rookie Zion Williamson, whose shoe exploded on Obama’s watch in the opening minutes of a Duke-UNC game.

As for the Nationals—who have failed to score more than a single run in any of the last three games—their chances of winning the World Series look exceedingly dim following the egregious display of disrespect for America’s president. The final two games of the series will be played in Texas, an actual U.S. state that voted overwhelmingly for Trump in the 2016 election.