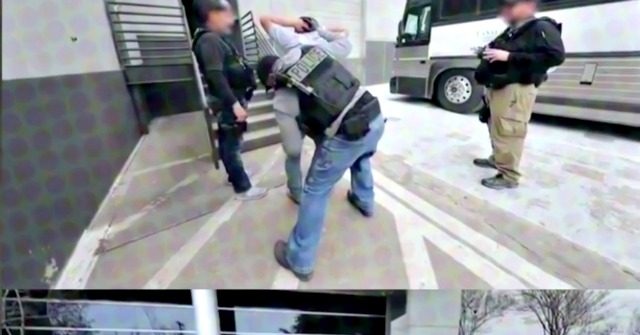 The fake University of Farmington, set up by the Department of Homeland Security, that resulted in the arrest of 250 foreign students this year and prompted outrage from leftists, was a concept embraced by the Obama administration, which engaged in similar operations.

Leftists experienced a collective freakout this week after U.S. Immigration and Customs Enforcement (ICE) announced the arrest of dozens of foreign nationals committing visa fraud by enrolling in the fake university. It was “part of a sting operation by federal agents who enticed foreign-born students, mostly from India, to attend the school that marketed itself as offering graduate programs in technology and computer studies,” the Detroit Free Press reported.

The Indian workers enrolled in the fake university to get work permits via two federal programs.

The two programs keep more than 400,000 foreign graduates in jobs sought by U.S. graduates and it provides billions in revenue for the U.S. investors, as well as the Indian-born hiring managers who traffick them into jobs in many companies throughout the U.S. economy. The OPT program also feeds foreign workers into the H-1B visa program, which allows employers to hire imported workers and then pay them with low wages and a promise of citizenship.

The Indians knew the university was fake because it did not require them to take classes — which is similar to many other colleges around the United States which provide OPT to foreign workers on “Day One” of enrollment.

The news prompted wails from notable leftists. Sen. Elizabeth Warren (D-MA) called the practice “cruel and appalling,” while Rep. Alexandria Ocasio-Cortez (D-NY) implied that the operation was an idea birthed by the Trump administration.

“Earlier this year, Congress rushed to approve BILLIONS more $ for ICE + CBP. I saw members voting YES w/o even a summary of the bill,” she wrote.

“Nobody cared then how we’d pay for it. Now ICE is setting up fake universities to trap students,” she claimed. “Yet we were called radical for opposing it”:

I saw members voting YES w/o even a summary of the bill. Nobody cared then how we’d pay for it.

Now ICE is setting up fake universities to trap students.

Yet we were called radical for opposing it.

“OH MY GOD,” left-wing actress and activist Alyssa Milano wrote upon learning of the arrests:

ICE has arrested about 250 students who were enrolled at a fake university set up by ICE to lure in students.https://t.co/2P8iZtnMGB

Hollywood actress Alyssa Milano does what she does best: Empathizes with victims of Trump.
Plot twist: Those ‘victims’ are Indian graduates who are using organized fraud to snatch ‘OPT’ work permits & good jobs from her college college-graduate followers. https://t.co/3ZLyhJAMsQ

However, the practice was not a concept birthed by the Trump administration, despite the implications from the political left and Hollywood elite. Similar operations occurred under the Obama administration at the fake University of Northern New Jersey, established in 2013.

“In many instances, the schools are nothing more than sham visa mills,” New Jersey U.S. Attorney Paul J. Fishman said of the “Pay to Stay” scheme in 2016, according to the Washington Post.

They have no curriculum, no classes, no instructors, and no real students. These purported schools and their corrupt administrators simply give out I-20 [work permit] forms in exchange for payment. This illegal practice is known as ‘pay to stay’ because foreign nationals pay money to brokers and recruiters, like the defendants, to be enrolled in a school for the sole purpose of obtaining immigration status as a student — but with no intention of or interest in going to class or making any progress toward an academic degree.

“Although UNNJ was physically located here in New Jersey, in a real building in Cranford, the university was not a real school,” Fishman explained.

“Its only employees were undercover … agents posing as corrupt administrators. The school had no instructors or educators; it had no curriculum; and no actual classes or educational activities ever occurred there,” he continued.

“‘Pay to Stay’ schemes not only damage our perception of legitimate student and foreign worker visa programs, they also pose a very real threat to national security,” he added, noting that the operation and subsequent arrests “stopped 21 brokers, recruiters and employers across multiple states who recklessly exploited our immigration system for financial gain.”

According to the Post, the fraud was relatively obvious.

Parts of conversations between defendants and UNNJ “staff” make clear how transparent the alleged fraud was. Zitong Wen and Chaun Kit Yuen, for example, are two Chinese nationals residing in California now charged with conspiracy to commit visa fraud and conspiracy to harbor aliens for profit. Their indictment said they contacted UNNJ in 2014 “to offer their services as recruiting agents for purported foreign students.” But the alleged conversations were a little unusual.

“You know that none of these people are going to class,” an undercover agent allegedly told Yeun. “[J]ust, you know, between us, you know, you’re good with that right? Make sure your clients are good with it too, okay? I don’t want anybody, you know, showing up at my doorstep thinking they’re gonna be in my … advanced calculus class or anything like that. … That’s not gonna happen, right? We know this is just to maintain status.”

Regarding the impact on the “students,” BuzzFeed reported:

He is now one of more than 1,000 former UNNJ students who had their visas terminated last week after the sting was made public by Immigration and Customs Enforcement officials. The sting was a multiyear effort, beginning in 2013, that led to 21 brokers and middlemen being indicted for conspiracy to commit visa fraud. Chang and his fellow students, though they escaped criminal charges, will need to leave the country within months; their visas will be flagged for fraud, making it extremely difficult for them to return to the United States. Some may be placed under “administrative arrest,” an ICE press release said.

What is more, The Detroit News reported that the University of Farmington’s operation started in 2015, prior to Trump’s first term, as “part of an undercover operation dubbed ‘Paper Chase.’”

It was “designed to identify recruiters and entities engaged in immigration fraud, according to the indictment,” it added, noting that Homeland Security agents “started posing as university officials in February 2017.”

“It’s creative and it’s not entrapment,” Wayne State University law professor Peter Henning said, according to the publication. “The government can put out the bait, but it’s up to the defendants to fall for it”:

GAO warns DHS to do more to prevent the smuggling of Indian and Chinese graduates into U.S. white-collar careers, such as software, healthcare, accounting, etc. Most smuggling takes place via the universities’ ‘OPT’ work-permit giveaway to foreign grads. https://t.co/NSUIVQDO4m