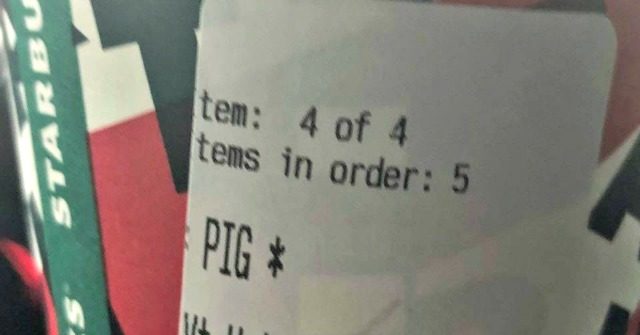 GLENPOOL, Okla. (AP) — An Oklahoma police chief says an officer bought Starbucks for 911 dispatchers working on Thanksgiving only to find that the word “PIG” was printed on the cups’ labels.

The officer notified Kiefer Police Chief Johnny O’Mara, who called the store and spoke to a manager. O’Mara says they offered to reprint the computer-generated labels, but he took to social media and posted the photo. It has since gone viral.

The officer told KTUL-TV that the employee reached out to him personally and apologized, saying it was a joke.

However, in a Friday statement, Starbucks said the worker who wrote the offending word on the cup “used poor judgment and is no longer a partner’’ after the violation of company policy.

“This language is offensive to all law enforcement and is not representative of the deep appreciation we have for police officers who work tirelessly to keep our communities safe,” the statement said.

In a separate joint statement, Starbucks and the Kiefer Police Department stated they are committed to using the incident as an opportunity to promote greater civility. Starbucks officials said they will be meeting with Kiefer police officials to discuss ways to work together, including a jointly hosted event that will allow local law enforcement to meet with baristas and community members “to discuss the critical role dispatchers and police offers play in keeping our communities safe.”

Last year, Starbucks closed stores and had employees undergo anti-bias training after the arrest of two black men in a Philadelphia location. The coffee chain’s executives met with Arizona officers earlier this year after six officers were asked to leave a store because a customer felt unsafe.