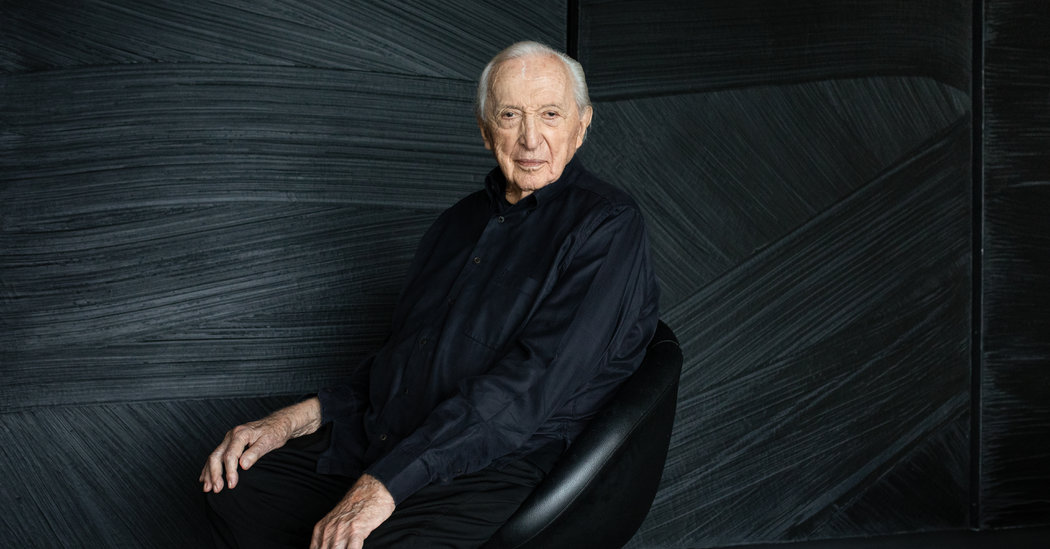 SETE, France — To get to work, the French artist Pierre Soulages must navigate about a dozen steps, from his house overlooking the Mediterranean to his studio downstairs, just above a sparkling blue pool. At age nearly 100, he is finding this a little difficult lately.

“It’s just because of my knee,” he said as an assistant gave him a hand. But he still makes it down there to paint regularly, if not every day. The cavernous space is remarkably tidy, with canvasses hung against the walls and tools stored neatly. “I’m not a believer in the myth of the chaotic artist,” he explained, “with paint everywhere.”

Indeed, Mr. Soulages is a man who favors simplicity in his lifelong quest to create a profound body of work using as little color as possible. For more than 70 years, he has painted primarily in black. Since 1979, he has worked exclusively in black, creating a series of works he calls “outrenoir,” or “beyond black.”

For those unfamiliar with his work, it might be hard to imagine hundreds of variations of paintings in a single color, but for Mr. Soulages, there is no other color.

“Black is never the same because light changes it,” he said, in French, through an interpreter. “There are nuances between the blacks. I paint with black but I’m working with light. I’m really working with the light more than with the paint.”

In December, the Louvre will celebrate Mr. Soulages’s centennial birthday with the exhibition “Soulages at the Louvre,” featuring about 20 works from 1946 to 2019. They represent a tiny fraction of the estimated 1,700 works he’s created over 72 years, and the show does not pretend to be a retrospective. (The Centre Pompidou in Paris hosted one of those a decade ago.)

Alfred Pacquement, a co-curator of the exhibition, said Mr. Soulages is only the third contemporary artist in history to receive a solo exhibition at the Louvre. The other two were Pablo Picasso and Marc Chagall.

“He’s not an artist who has 10 assistants who are painting for him,” said Mr. Pacquement in a telephone interview. “Every spot of painting on the canvas is done by him and not by someone else.”

In a run up to the Louvre exhibition, Lévy Gorvy Gallery in New York presented “Pierre Soulages: A Century” this fall. “He’s history and he’s contemporary at the same time,” said Emilio Steinberger, senior director at the gallery. “He was friends with Giacometti and Rothko; he started when Pollock just started pouring paintings. You’re talking to someone who was at the center of history in Paris and in New York and at the moment is still a very contemporary artist. There’s almost nobody else like that.”

Mr. Soulages lives with his wife, Colette, who is 98. They married in 1942. The house in Sète used to be their summer retreat from Paris, but two years ago, they decided to settle here permanently.

Colette was born in Sète. Sixty years ago, Mr. Soulages said, the couple was hesitant to buy property here: “She was nervous that her friends would bother me,” he said. But they were shown a dilapidated cottage on a high bluff, which they tore down and together designed a modernist retreat, now a time capsule of 1960s design. “Everything you see, except for the chairs, has been here for 60 years,” Mr. Soulages said.

From this perch, it is not hard to think of the vast blue Mediterranean as the outermost border of Soulages Country, a section of Southern France where one can find hundreds of his works on display. An hour drive from here is the Musée Fabre in Montpellier, where an entire wing is devoted to Mr. Soulages’s work; two hours’ drive to the north is the Musée Soulages in Rodez, containing 400 of his pieces, the largest collection anywhere.

“Pierre and Colette do not have any children,” explained Benoît Decron, founder and director of the Soulages Museum during a visit in October. “This museum is their child.”

The collection in Rodez spans the entirety of Mr. Soulages’s career, from early figurative paintings (gasp!) and notes from his teen years, up to his most recent work, the outrenoir paintings.

“I always say his paintings are 51 percent light and 49 percent black,” said Mr. Decron. “You see different colors in them at different points of the day: reds, blues, whites. They are constantly changing.”

Rodez is where Mr. Soulages was born on Christmas Eve, 1919; his father was a coach builder. As a youth, he was fascinated with archaeology, regularly visiting the local natural history museum, the Musée Fenaille, and its collection of nearly 5,000-year-old stone monoliths. Prehistoric artifacts Mr. Soulages found at age 16 or 17 during an archaeological excavation of a burial chamber from the Neolithic period are part of the museum’s permanent collection.

On a visit in October, the museum was hosting the exhibition “Pierre Soulages: an Imaginary Museum,” featuring 50 artworks of prehistoric, cave art and ancient artifacts from French collections that were influential to Mr. Soulages, including his own finds.

Prehistoric art was his primary source of inspiration, Mr. Soulages said. “I always ask myself one question,” he said. “Who was this big ape who one day painted on the wall?”

Historically, it’s logical to connect Mr. Soulages to American Abstract Expressionists such as Franz Kline and Rothko, or to monochromatic artists like Yves Klein (who invented his own blue and painted in just that color) or Robert Ryman (who painted only in white) or to harken back to Kazimir Malevich’s revolutionary 1915 “Black Square,” which marked the birth of pure abstraction.

But Mr. Soulages said the origins of his own paintings lay in more primal forms of art, like cave painting, because when he stands before them, they “overwhelm” him. That is the experience he wants his own art to have on the viewer, he added.

He said he was not an Abstract Expressionist, because those artists sought to express their emotions on canvas, while he does the opposite, inviting the viewer to experience their own inner emotions through his work.

“It happens between the surface of the painting and the person who is in front of it,” he said. “The reflection of light is what moves us.”

While he’s often been referred to as “the painter of black,” his work is not strictly monochromatic. He started by working with walnut stain on paper, and when he painted canvases for the first few decades of his career, he’d paint a background with white, or gray, and then various colors, such as mustard yellow or blue or ocher. He’d paint over them with bold streaks of black, which he’d then remove by scraping away the paint.

In 1979, Mr. Soulages made his first “outrenoir,” all-black work, which he said is, “from another country than black. It’s a very rich country.” These reflective, thickly textured paintings are brushed, scraped, hatched and divided into slick or ridged territories. Although they all are recognizable as Mr. Soulages’s work, none are the same.

During the studio visit in October, Mr. Soulages pointed out two works that will be featured in the exhibition, both of them completed in August. They were long, vertical paintings in all black, with horizontal grooves cut into the thick acrylic paint surface, as if they’d been worked over with a rake. Some parts of the surface were slick, others ridged.

The texturing is accomplished with various tools that he invented as he worked — sometimes made of cardboard or other perishable materials that he’d throw away immediately. He’d also frequently destroy works that displeased him, usually by burning them.

Asked if there was one artwork that he particularly cherished from his career, Mr. Soulages shook his head. “I’m always preoccupied by the painting that I want to do tomorrow or today,” he said. “For me, it’s always different. I always discover new things.”

Soulages at the Louvre
Dec. 11 through March 9 at the Musée du Louvre, Paris; louvre.fr.